Slot machine junkies and poker sharks could soon ride one of three futuristic high speed trains from Los Angeles to casino mecca Las Vegas. But that’s assuming developers get on board with a tubular rail, a maglev transporter for cars, or an air-cushioned train.

Boosters for the unusual transportation modes made their pitches at a forum held by the University of Nevada, Las Vegas this past Monday, according to the Las Vegas Sun. 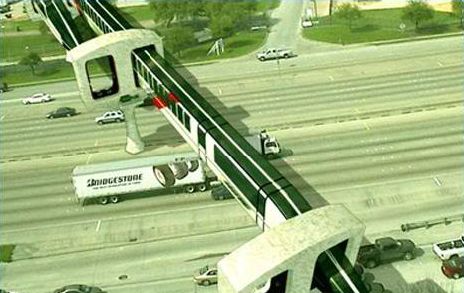 The Tubular Rail concept would work as a single rigid train that threads the needle through elevated support rings. Each train would have guidance rails, and would keep in contact with the electric motors on at least three rings at all times, to reach speeds of up to 150 mph.

Such O-ring pillars would supposedly represent a huge cost savings compared to laying traditional rail. Robert Pulliam, the Houston resident behind the idea, has assembled a coalition of developers and companies to realize his vision, and hopes to raise $30 million for a two or three mile test track.

A second concept by Californian Frank Randak, called AVT SolaTrek, would take cars off highways and load them onto moving maglev trains. The cars first get onto an automated shuttle vehicle that speeds up to match a moving train, and then load onto the train via conveyor belt. Passengers can then leave their cars to check in with private entertainment compartments.

A third idea called America’s Sunlight Bullet Expressway would combine a nationwide network of electric trains with guideways that could also hold transmission lines. The trains themselves would resemble air-cushioned vehicles, and could theoretically carry up to 1,400 passengers at speeds of up to 500 mph.

We at PopSci enjoy our far-out transportation schemes, and so it should be interesting to see if any developers take a gamble on pushing for some test builds.

[Las Vegas Sun via The Register]