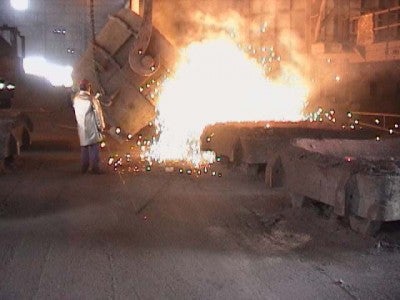 Super-cements similar to the ancient concrete used to build the pyramids might defeat even the U.S. Air Force’s largest non-nuclear bunker buster to date.

Wired’s Danger Room has a rundown on how French researcher Joseph Davidovits uncovered the chemistry of geopolymers, or super-cements. Davidovits also put forth the theory that the Egyptian pyramids were built using a similar type of geopolymer limestone concrete — an idea supported by X-ray and microscopic study samples.

The Romans similarly mixed crushed rock with burnt lime and water to build the Pantheon, which still holds the title of the world’s largest unreinforced concrete dome. But modern concrete has typically proved miserably inferior and vulnerable to a slow deformation process called “concrete creep.”

Now the U.S. Air Force Research laboratory has backed using geopolymers to build runways, rocket nozzles, and even glue for satellite components. Iran has similarly invested in the idea of super-strong concrete, according to Danger Room.

Such research could signal a possible counter to the Air Force’s Massive Ordnance Penetrator. That bunker buster can punch through 200 feet of traditional concrete, which is rated at 5,000 pounds-per-square-inch, but only 25 feet of improved 10,000-psi concrete.