Autopsies, for all the useful information they provide, have significant downsides. They are often upsetting to the deceased’s family, they... 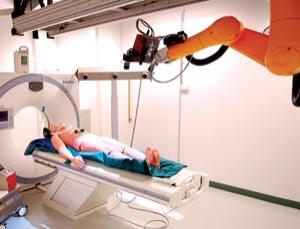 Autopsies, for all the useful information they provide, have significant downsides. They are often upsetting to the deceased’s family, they prevent people from receiving certain kinds of religious burials, and they leave a bit of a mess. To correct for those problems and more, a team at the University of Bern, Switzerland, has developed a robot that can perform virtual autopsies.

The robot uses stereo cameras to record a 3-D image of the body’s exterior, and a CT scanner to record the body’s internal condition. This results in a complete, 3-D, computerized model of the entire body. Doctors can control the robot to perform micro-biopsies for tissue examination, doing away with any serious deformation of the body. The medical examiner can then analyze the image, perform virtual biopsies, and store the data for future use. The process leaves no pile of used organs, and no jars filled with alcohol and tissue.

In addition to making the whole process much easier, the robot-conducted virtual autopsy also makes it easier for medical examiners to compare the current corpse with previous cases, and build a database for future reference.

Additionally, the robot used for the autopsy is much cheaper than the robots usually used for surgery. Since there’s no chance of hurting someone who’s already dead, the robot that does the job can be a less precise, industrial model, the type designed to assemble a car, not remove an appendix. For similar reasons, surgical robots need a doctor monitoring them at all times, but the robo-medical examiner can operate autonomously.

Welcome to the future: if you’re not killed by a robot, then at the very least, a robot will figure out how you died.