In 2006, a bunch of terrorists went ahead and ruined air travel for the rest of us. After the terrorists... 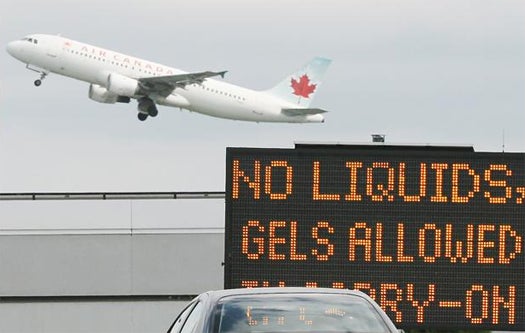 In 2006, a bunch of terrorists went ahead and ruined air travel for the rest of us. After the terrorists failed to bring liquid explosives onto a British flight, the airlines banned liquid carry-on items larger than 3.4 ounces. This forced us to leave shampoo at home and buy outrageously overpriced drinks by the gate, to say nothing of the flask of whiskey I liked to travel with.

Thankfully, some German scientists have devised a test that might return air travel to a civilized mode of transportation. By using electromagnetic radiation to calculate the chemical composition of a target liquid, researchers at Forschungszentrum Jülich, an inter-disciplinary research center near Cologne, Germany, have cut the identification time for explosives down to 0.2 seconds.

Even more important, this method differs from the regular explosives detectors in that it can identify the precursors to explosives as well. The 2006 plot that started all this nonsense apparently involved terrorists mixing the common household items acetone and hydrogen peroxide together on the plane. Those two chemicals are safe by themselves, but when mixed in the presence of an acid, form explosive crystals.

The researchers are working to expand the database of liquid chemical signatures to further increase the fidelity of the test, and hope to reduce the size and expense of the machine to make it more practical for widespread use. Now, if they can only do something about having to take your shoes off…