While most research directed at improving UAVs focuses on upgrading their weapons or sensor packages, the Naval Research Laboratory is... 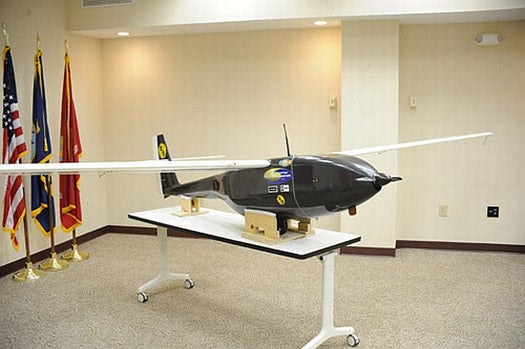 While most research directed at improving UAVs focuses on upgrading their weapons or sensor packages, the Naval Research Laboratory is also working to ensure that the next generation of killer drones are as fuel-efficient as they are deadly. And a recent test of their hydrogen-fuel-cell-powered Ion Tiger UAV proves how successful they have been: it staid aloft for just shy of 24 hours on a single fuel load.

Flying out of the Aberdeen Proving Ground, the Ion Tiger UAV set a new record for hydrogen-powered flight by staying aloft for 23 hours and 17 minutes. This places close to the 30-36 hour endurance of the Tiger’s gas guzzling Predator and Reaper cousins.

Unlike its larger relatives, Ion Tiger only weighs 37 pounds, thus requiring only .75 horsepower to fly around for the better part of a day. However, the hydrogen powered motor did prove four times more efficient than similarly powerful combustion engines and seven times more powerful than a comparably sized battery.

So far, the Ion Tiger exists only as a proof of concept, and has not been deployed on land or at sea.