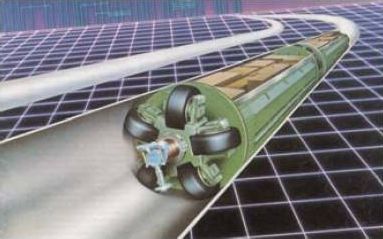 Forget about carrying cargo by truck, and instead imagine shuttling goods around inside a series of underground tubes. That’s the hope of Henry Liu, a 73-year-old retired civil engineer and a past winner of PopSci‘s Inventions Awards for his environmentally safe green bricks.

The inventor has received $100,000 as an “encore career” prize from a San Francisco-based organization and plans to use part of the money to push his vision for revolutionizing freight transportation, according to the Columbia Daily Tribune. The network would move boxcar-sized capsules inside underground pipes across long distances, and relies on an electromagnetic pump that Liu invented along with three former colleagues at the University of Missouri.

The idea attracted interest from the New York State Energy Research and Development Authority (NYSERDA), which ran a feasibility study in 2004. Liu showed that his system of pipelines working for New York alone could cut truck traffic by 10 billion vehicle miles, and suggested it could save on land use, cut carbon emissions and protect the cargo better from terrorist attacks.

Liu has founded a company named Freight Pipeline to pursue his transportation idea, so we’ll be keeping an interested eye on that. But for now, he can look forward to receiving his $100,000 Purpose Prize from the Civic Ventures think tank at Stanford University this coming weekend.