Just because most black holes are solar-system-sized maelstroms with reality-warping gravitational pulls doesn’t mean you can’t have one in your... 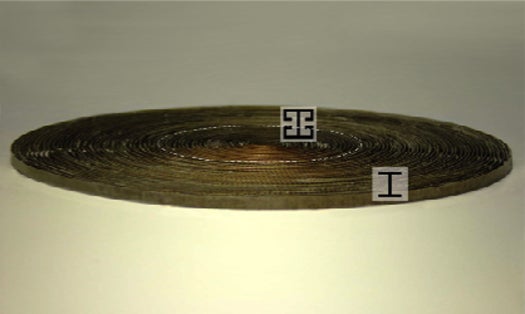 Just because most black holes are solar-system-sized maelstroms with reality-warping gravitational pulls doesn’t mean you can’t have one in your pocket! That’s right, just in time for the holidays comes the pocket black hole. Designed by scientists at the Southeast University in Nanjing, China, this eight-and-a-half-inch-wide disk absorbs all the electromagnetic radiation you throw at it, with none of the pesky time dilation and Hawking radiation associated with the larger, interstellar versions.

Unlike a regular black hole, which traps light using the gravitational pull of the dead star at its core, this simple metal disc uses the geometry of 60 concentric rings of metamaterials to lock up light for good. The metamaterial “resonators” that make up the rings affect the magnetic properties of passing light, bending the beams into the center of the disc, and trapping them in the etched maze-like grooves.

But wait, there’s more! These discs don’t destroy the energy of the trapped light, and emit heat when trapping ambient radiation. That means these metamaterial black holes could serve as the basis for solar panels that capture every wavelength of the electromagnetic spectrum. And do so near-perfectly, to boot.

Call now! Operators are standing by.*

*NOTE: No operators are actually standing by.