The Army takes another crack at augmented reality headsets

Microsoft will produce version 1.2 of a device that has had a bumpy history. Here's what it's supposed to do. 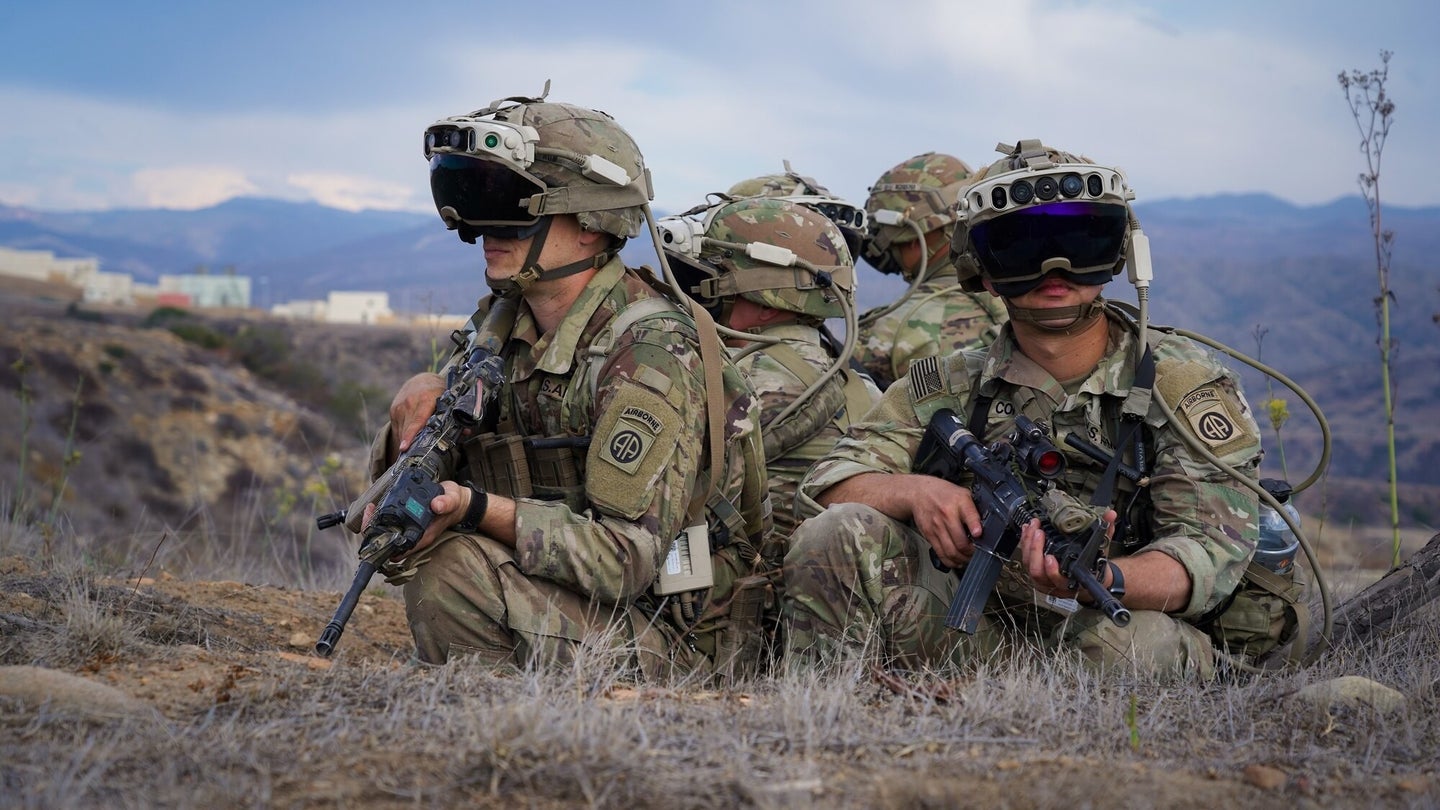 Soldiers wore the IVAS devices during an exercise in October, 2022. US Army / Thiem Huynh
SHARE

The US Army is moving ahead with its augmented reality headset, a gadget that has had a turbulent history. In an announcement shared January 5, the Army announced that Microsoft had been awarded a contract for version 1.2 of the Integrated Visual Augmentation System, a headset for soldiers that’s designed to improve perception of their surroundings. The Army already has 1.0 and 1.1 versions of the headset on hand, and expects to start fielding the headsets in September 2023.

“The mixed-reality headsets allow Soldiers to see through smoke and around corners, use holographic imagery, thermal and low-light sensors to see in the dark and display 3D terrain maps and a compass projected into their field of vision,” the Army said in a release. “They provide tools to better conduct land navigation, battlefield tracking and movement through urban buildings and open terrain.”

The headset, based on Microsoft’s HoloLens augmented reality headset, is designed to let soldiers see the battlefield in a normal way, as well as with additional information, thanks to onboard image processing and data-sharing tools. Ideally, it’s a way to make real combat incorporate some of the innovations in perception and data display that have proven useful in video games, while also ensuring that only actually relevant information is added.

In asking for a 1.2 variant, the Army appears to be addressing some of the limitations of existing models of the headset. These shortcomings were reported in October, after an unclassified internal evaluation was obtained by Bloomberg News, revealing the existing headsets caused “‘mission-affecting physical impairments’ including headaches, eyestrain and nausea,” according to a summary of soldiers’ experiences during a field exercise, complied by the Pentagon’s testing office.

One way to think of the headsets is as providing an extra set of sensory information to the people wearing them. If displaying that information in front of the soldier’s face, as the visor is designed to do, causes impairment, then it takes what should feel like a superpower and turns it into, at best, a discarded inconvenience and, at worst, a life-threatening liability.

These reported problems undermine the potential of the system, and with it the Army’s vision of data-driven warfare down to every soldier acting as a sensing node in part of a larger network.

In the terse language of the award announcement, the possible headaches, eyestrain, and nausea are not mentioned. Instead, the announcement first walks through the achievements of the 1.0 and 1.1 versions of the headset. “IVAS 1.0 provides baseline warfighter capability, and the IVAS 1.1 features an improved low-light sensor to aid maneuver and positive target identification.”

It’s in outlining the 1.2 improvements that changes made to ease the strain of use can be seen.

“In addition to the IVAS 1.1 improvements, IVAS 1.2 will include a new form factor to address Human Systems Integration, including physiological impacts identified during testing, and a lower profile heads-up display with distributed counterweight for improved user interface and comfort. IVAS 1.2 will also include software improvements for increased reliability and reduced power demand.”

That reads like a tacit acknowledgement of some limitations in the system. The Army did not respond to a request for comment.

As reported at Defense News, the goal for the 1.2 version of IVAS is to trim over half a pound from the total weight of the original system. The 1.0 weighs 3.4 pounds, including a 2.4-pound headset and 1 pound of weight carried somewhere below the soldier’s head. The goal for 1.2 is a total system weight of 2.85 pounds, “the same or better than the Enhanced Night Vision Goggle-Binocular,” defense officials told Defense News.

Should the 1.2 version of IVAS mitigate the earlier reported problems with the system, it will increase the field of what soldiers can see and track. Goggles and binoculars are limited by the narrowness of their field of view, and IVAS’s broad goggle plus camera array is aimed at widening that perception. Target identification, or the ability for the goggles to perceive and mark objects like vehicles, buildings, and people on the battlefield, could greatly improve the ability of soldiers to fight, especially in low-light situations or against enemies hiding in cover. The headsets even promise to let soldiers riding as passengers in transports perceive the area outside the vehicle’s armored walls.

By incorporating the individual headset-wearing soldier into the broader array of Army sensors, the hope is that the Army can not just perceive more of the battlefield, but make sure vital information is in the hands of—or vision of—the soldiers who most need it. It’s long been the promise of the future. If the 1.2 version delivers as promised, and the headsets can start being fielded on time, that means this future starts in September 2023.