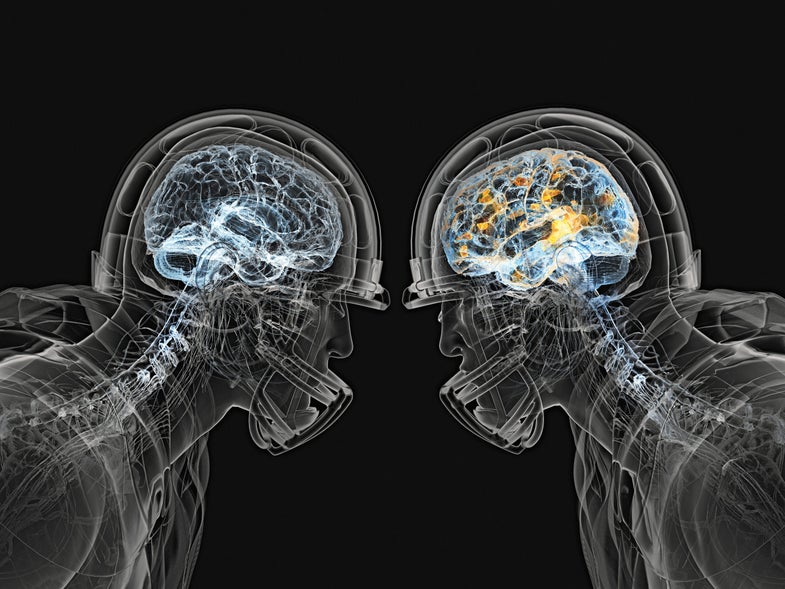 Legendary NFL linebacker Junior Seau committed suicide in 2012, less than three years after his final game. An autopsy overseen by the National Institutes of Health revealed that he’d had chronic traumatic encephalopathy, or CTE—a degenerative brain disease that can result from hits to the head and might cause depression, aggression, memory loss, and dementia.

High-profile cases like Seau’s have raised public awareness of CTE in the NFL in recent years. And rather than a rarity, researchers are concerned the disease might be more widespread than previously believed. Boston University’s CTE Center has been analyzing the brains of deceased athletes and veterans since 2008; the condition has shown up in 175 of the 247 brains studied. Among deceased NFL players, it’s 88 of 92.

Currently, the disease can’t be treated. In fact, doctors can’t even diagnose it when a person is alive. CTE can be found only during autopsies. But that might be about to change.

“There’s tremendous optimism that we can develop a way to identify this in living individuals,” says Ann McKee, director of neuropathology at the CTE Center at Boston University. Some scientists are trying to find a CTE signature in blood, saliva, or spinal fluid.

Others aim to track down a misfolded protein called tau, which is known to aggregate in the brains of people with CTE. By developing a radiotracer than adheres to this abnormal tau (and only this tau), researchers hope to be able to spot it in PET scans.

A team of researchers from Boston University and two local hospitals is testing a tracer called T807 in clinical trials backed, in part, by the Department of Defense. They’re injecting it into former NFL players and expect results on its effectiveness within the next few years. This past April, a UCLA team developed a technique using a tracer called FDDNP, though some researchers question whether it attaches exclusively to tau.

“There’s been incredible growth in tau neuroimaging, just in the past three years,” says Robert Stern, director of clinical research at Boston University’s CTE Center. “Millions and millions of dollars are being poured into this gigantic area of research.”

At this pace, scientists—including Stern and McKee—anticipate they could be diagnosing the condition in living brains within a decade. Researchers can then work on treatments to reduce tau or its effects on the central nervous system, putting the brakes on the disease before it’s too late.