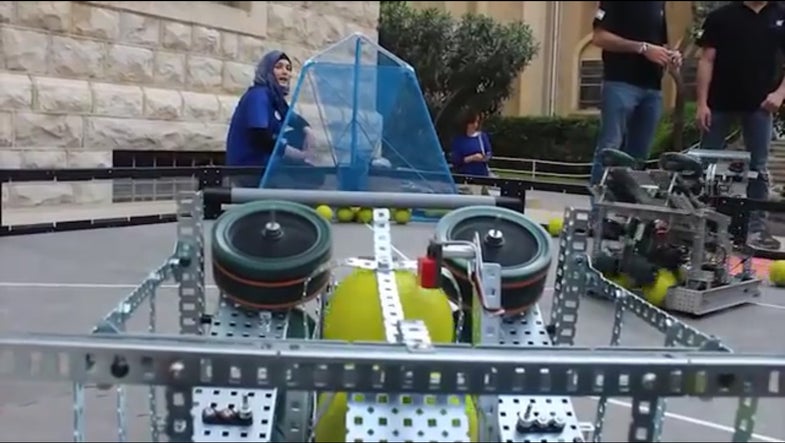 The competitors entered the arena, all clattering metal and fidgeting gears. They held balls, ready to hurl into their corner basket, and before them stretched several ball towers. Two years ago the sport didn’t exist. Now, the robotic opponents built to play it were assembled and ready to play.

The sport, invented by the VEX Robotics, is called “Nothing But Net,” and is designed for mostly autonomous vehicles. The goal is hurling balls at a net, with more accurate throws earning more points. There are also scoring options for finding and tossing bonus balls, and even points for celebration at the end. But mostly, this sport is about robots tossing balls.

The robots pictured above were created by Hope of Syria, a team of Syrian refugees in Lebanon, who competed at the VEX event held by the American University of Beirut on March 19th, 2016. When their robot drives over balls, its conveyor-belt-like track scoops them up and then pulls them to the top, where they’re launched at high speed. Hope of Syria came in first in Lebanon’s VEX competition for high schools. The team is hoping to travel to the United States to compete with their robots at the international level.

Read more about them at Buzzfeed, and watch a short video on the team below: