SXSW 2015: How Extreme Bionics Will Rid The World Of Disability

Robotic limbs will become an advantage, not an impediment 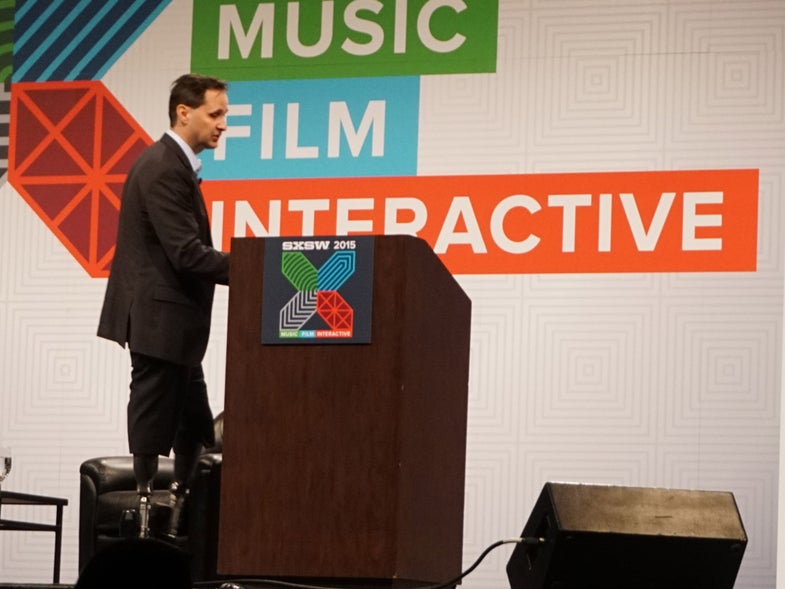 At South by Southwest on Sunday, MIT professor and double amputee Hugh Herr shared his vision of a future without disability. In the field of bionics, Herr and his team have made incredible strides such as building powered ankle-foot prosthetics that provide tactile feedback like their biological counterparts, or regenerating neurons in rats and humans.

“Technology is changing at such a rapid clip. I did not view my biological body as broken. I viewed the artificial limbs as utterly pathetic and stupid, and that by changing bad design, one could conquer disability across a broad range,” he said during his talk. But beyond the possibilities of now or even the near future, Herr gives us a glimpse into a world where, eventually, those with healthy or even mildly injured limbs may prefer bionic limbs, or where having bionic legs would be an advantage. “People have the capacity to end disability in this century, while adhering with absolute obedience to the general principles of human diversity and individual freedoms,” Herr said. We caught up with him after his IEEE presentation to learn a little more about the world of extreme bionics.

Popular Science: What does a world without disability look like?

Hugh Herr: It’s not well appreciated, but about half the world’s population has some unusual body or brain. So, if you look at disability broadly–physical, sensory, emotional, cognitive–there’s a lot of human beings that, because of poor technology, are suffering dearly. I think it’s a wonderful challenge in this century to advance technologies to reduce that human suffering.

PS: What kinds of ripple effects will happen when we have eliminated disability?

HH: The same scientific and technological knowledge that will enable the reduction or elimination of disability will also allow for human augmentation–to take a “normal person” and make them “better” in some dimension. So, basically, I view current people that have unusual bodies as astronauts that are helping advance these new technologies that all of humanity will use in the future.

HH: ﻿That was an interesting problem. A lot of the research in the area of robotics for leg conditions is looking at how can we capture repetitive actions like walking and running. We want to nail that because it’s a lot of what people do during the day. But beyond that, there’s these non-repetitive patterns, like walking over really rough terrain, where every step is a different step–and dancing of course. So, for those types of motor tasks, ultimately tapping into the supercomputer that is the human brain and spinal cord is going to prove very important. Because, my body and spinal cord know how to play piano and skip over rocks and do all of these extraordinary motor tasks. We just need to tap into that knowledge and transmit it out to bionic appendages.

Extreme bionics could mean the death of “normalcy.”

PS: Are there other expressive situations enabled by bionics?

HH: With all these bionic interventions that are coming down the pike, it’s not difficult to imagine a future world where our bodies are plastic and malleable, where our bodies become a platform to do art. Now, we have limited abilities to modify our bodies. We can pierce things and tattoo things and put silicone into our body. But in the future, we’re going to have a much larger menu of body manipulations. And my hope is that it will be the death of normalcy. Right now, an attractive woman, an attractive man within a particular culture, is very narrowly defined. I think in a world where we can just sculpt our own bodies, people will just go wild with creativity. That’s really the fun dimension of bionics.

PS: You’ve accomplished so much in bionics. What are some of the biggest challenges now that you’re facing to furthering that?

﻿HH: The task of bionics is really the scientific challenge of developing interfaces between the body and the built world. There’s different types of interfaces. One is electrical. How do you bi-directionally signal electrically into and out of the nervous system, either centrally or peripherally? Another is mechanical. How do you attach machines to the body so it’s comfortable? Another is dynamic. How do you build body parts that move like natural body parts? So, in each of these areas, we’re pushing the boundaries of capability. I’m really excited about the electrical interfaces to neural implants, and also the mechanical interface. So many people now wear technology on their bodies and are uncomfortable. The interface here between the artificial and my body can be painful. Braces can be painful, shoes can be painful, I’ve been told that bras can be painful. We really need to understand how to attach things to our bodies without harming the body.