A super typhoon of historic proportions just cut thousands of U.S. citizens off from the world 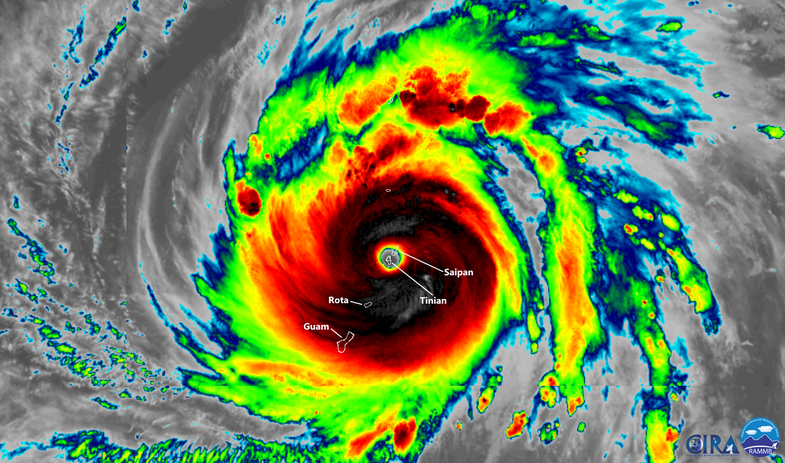 The core of Super Typhoon Yutu struck Tinian and Saipan in the Northern Marianas Islands today—the strongest storm on record to make landfall in this U.S. territory in the western Pacific Ocean.

The full force of the typhoon’s 180 MPH winds hit around 12:00 PM EDT on Wednesday. The islands likely suffered significant damage from the storm, and communications with the outside world will be sparse until crews from Guam can arrive and assess the extent of the damage. The Commonwealth of the Northern Marianas Islands (CNMI) became a territory of the United States in the years after World War II. Like residents of Puerto Rico, Guam, and the U.S. Virgin Islands, the 50,000 people living in the CNMI are American citizens.

Yutu quickly developed into the equivalent of a category five storm as it approached the Northern Marianas Islands this week. Strong winds to the north of the system helped the typhoon’s outflow—the exhaust of air above the storm in the upper levels of the atmosphere—thrive, clearing cooler air away and intensifying the storm even more quickly than predicted.

The eye of Super Typhoon Yutu made a direct landfall on the small island of Tinian, a rare feat for a typhoon of any size, let alone one of historic proportions. The eyes of intense tropical cyclones tend to wobble to the right and left as they move along their path, and Yutu’s eye wobbled to the right at just the wrong moment—putting Tinian and Saipan directly in the typhoon’s worst conditions.

Saipan’s Airport reported a wind gust of 97 MPH before the anemometer stopped reporting just after midnight local time. Few other reports have come out of the islands since the core of the storm made landfall. The calm eye of the storm engulfed all of Tinian and most of Saipan, giving residents a brief reprieve from the destructive winds before the back side of the eyewall moved over land. The National Weather Service office in Guam noted that there was intense lightning in the eyewall as it passed over the islands, a common characteristic of rapidly intensifying hurricanes.

Records dating back to 1950 show only three typhoons moving close to the Northern Marianas Islands with the equivalent strength of a category five on the Saffir-Simpson Hurricane Wind Scale. None of those previous storms came close to making landfall. Super Typhoon Yutu is the strongest storm to hit these islands on record, and the strongest tropical cyclone to make landfall anywhere on Earth so far this year.

A tropical cyclone with 180 MPH winds is about as strong as these storms can get. Only one hurricane on record, the 1935 Labor Day hurricane in the Florida Keys, has ever hit the mainland United States with winds of 180 MPH or stronger. It’s likely that many communities on Tinian and Saipan will be unrecognizable once the storm is over. Most, if not all, of the trees on the islands will be completely defoliated. Most structures will be damaged or leveled, perhaps except for those built to withstand strong storms or those shielded on the leeward side of Saipan’s mountains. Power and communications infrastructure will likely be down for weeks and possibly months in the hardest-hit areas, and recovery and rebuilding efforts will be difficult due to the islands’ isolated location in the middle of the western Pacific Ocean.