Why some people worry that sunscreen might be bad for you

The bottom line: Cover up. 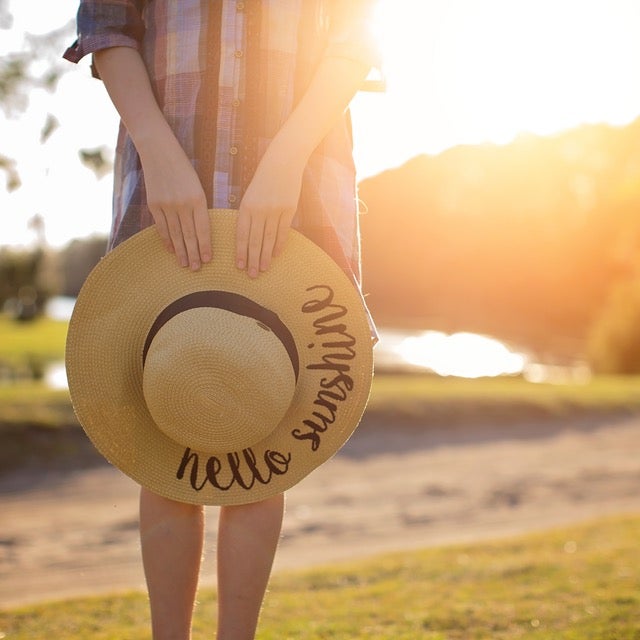 The science on sun exposure is clear: too much of the sun’s ultraviolet radiation leads to sunburns, rapidly aging skin, and potentially, skin cancer. And that risk? It isn’t minimal. An estimated 20 percent of Americans will develop skin cancer during their lifetimes, making it the most common form of cancer in the country. To lower their risk, many Americans turn to sunscreens—sprays, lotions, and even powders—to protect their skin from the worst of the sun’s effects. But what do scientists have to say about sunscreen? Unfortunately, while the choice to protect yourself from the sun is a no-brainer, the question of how best to do so is a little more contentious.

Reports in recent years (most notably the Environmental Working Group’s(EWG) annual sunscreen safety rating) have raised concern that the thing we turn to for protection might actually be causing us harm. Is sunscreen secretly bad for us?

Sunscreens were originally introduced as cosmetics, but after they began making health claims (like that whole stopping sunburns thing) the Food and Drug Administration made the decision to regulate them as drugs in 1978. But sunscreens that had been in use before 1978 weren’t subject to the battery of tests faced by new drugs. As long as companies could prove efficacy, their products were more or less grandfathered in, with ingredients occupying a category called Generally Recognized as Safe (GRAS). But growing awareness of the subtle, previously overlooked impacts of some GRAS chemicals—like bisphenol A (BPA) in plastic—has lead to increased scrutiny and study over the past decade or so. In other words, it’s not surprising that sunscreens we’ve relied on for decades are under the microscope.

At the center of the controversy rests the use of three ingredients—avobenzone, retinyl palmitate, and oxybenzone—in chemical sunscreens. Chemical sunscreens are the most common type of sunscreen and work by creating a layer that absorbs the sun’s rays. Oxybenzone is a chemical ultraviolet filter which absorbs the sun’s rays, sparing our skin the same fate. The EWG’s most recent survey says that oxybenzone is used in 65 percent of the chemical sunscreens in its database because in addition to blocking some Ultraviolet A (UVA) rays, it protects against Ultraviolet B (UVB) rays, the form of solar radiation linked to sunburns. Given its partial UVA coverage, it’s usually used in tandem with avobenzone. But rather than go into detail on all three contentious chemicals, we’ll just focus on oxybenzone (otherwise known as benzonephenone-3). The debate over this UVB blocker is emblematic of the difficulty in assessing the impacts of chemicals—from skincare products to pesticides—on human health.

It’s not difficult to assess the toxicity of a chemical that kills us quickly. We know that cyanide gas is deadly, for example, because people who are exposed tend to drop dead within minutes. Asbestos, on the other hand, takes years to kill. And when it does, death can come courtesy of mesothelioma, lung cancer, ovarian cancer, and a host of other illnesses. Is it any wonder it took us a while to realize that the stuff was harmful? And then there are chemicals like lead,—ones that don’t necessarily kill us, but cause a host of health issues and cognitive declines. The gap between exposure and emergence of a disease is known as latency, and it’s just one of the many issues that makes it tough to determine a chemical’s safety.

Consider, too, that we aren’t exposed to chemicals in a vacuum—but rather in tandem with each other. Imagine you’re a construction worker who’s handled asbestos and smoked cigarettes all your adult life. When you’re diagnosed with lung cancer, do doctors blame your job or your smoking habit? Maybe both risk factors are to blame; maybe neither. This is partly why epidemiologists tend to reference risk in probabilities, not absolutes. It is possible (though quite improbable) to be a chain smoking asbestos installer who never gets lung cancer. These exposures make your underlying risk higher, but nothing guarantees health or illness.

Finally, there’s the question of dosage. Water, for example, is essential for life, but drinking too much—generally more than a gallon in a couple of hours—can cause hyponatremia. Hyponatremia means there’s not enough salt in your blood, which makes it hard for the body to maintain its balance. Fluid fills the brain, and you die. And this really does happen: in 2005, a fraternity pledge died from drinking too much water as part of hazing ritual.

Epidemiology tries to unscramble all these risks, and to do that, scientists have to do research. And that takes time.

So what does the research say, exactly?

So far, results on oxybenzone haven’t conclusively shown that it’s unsafe—studies have been mixed. A 2001 paper in which young rats were fed large doses of oxybenzone found that the female rats emerged with unusually large uteruses, suggesting hormonal effects (which in humans can contribute to risk of cancer). There are some caveats, however: the dose was high, people aren’t rats, and animal studies don’t always correlate to what happens in people.

A separate study on human cells found that oxybenzone can mimic estrogen and block testosterone, especially in breast cells. Cellular studies don’t always translate to what happens in the body—sometimes the body has mechanisms in place to counteract what happens in a Petri dish—so it’s not clear if the same thing is actually happening inside sunscreen users. And even if those reactions are occurring, we don’t know how they translate to effects on our health.

Another study, this one published in 2004, tried to actually get at those effects by examining the hormone levels of men and women who used sunscreen products. But the study followed only young men and postmenopausal women—women of reproductive age weren’t tested, despite the fact that women use sunscreen twice as frequently as men, not to mention the fact that in vitro and animal studies suggest that female reproductive organs might be particularly sensitive to oxybenzone. The study authors wrote that, “Postmenopausal women were selected to achieve a stable hormone level independent of ovarian-menstrual cycle,” but in this case the feature is actually a bug. Unfortunately, that’s a persistent problem—research often fails to study women as most of them actually function in the world.

But while the jury is still out on oxybenzone’s safety, we know that our bodies absorb it. A 2002 study found that adults who put on sunscreen containing four percent oxybenzone (the US allows up to six percent) in the morning and evening—mimicking what they’d do while on vacation—continued to excrete the chemical in their urine for five days afterwards, suggesting that it was being stored in the body.

The authors of that study recommended that parents avoid using sunscreens containing oxybenzone on young children, because it’s thought that they haven’t yet fully developed the enzymes that are believed to break down oxybenzone.

“We don’t know how long it is stored, and we don’t know whether it is important, but I suggest that parents of small children should avoid using sunscreens that contain benzophenone-3, to be on the safe side,” lead author Helena Gonzalez said in a statement at the time.

Taken together, this might seem to say that sunscreens containing oxybenzones are unsafe. But there really isn’t enough information to draw that conclusion, especially given the way most of us interact with sunscreen—we’re not exactly mainlining oxybenzones when we apply a coat of sunscreen; our doses are pretty tiny. And even if those small doses do raise our risk of cancer or other health problems, that doesn’t automatically mean we should cast them aside. A 2011 review study, which looked at much of the peer reviewed literature (including some of the studies outlined above), determined that the benefits of oxybenzone (reduced basal cell cancer and squamous cell skin carcinoma, but not melanoma) outweighed the known risks. Wearing sunscreen regularly can lead to a 25 percent decreased rate of carcinoma and basal cell skin cancers. A separate study found that daily use of sunscreen reduced melanoma incidence by 50 percent. In other words, even a chemical that technically isn’t good for us might be better than less effective methods of sun protection. It’s too early to tell.

To understand whether or not oxybenzone was really unsafe—as in, so harmful it outweighed the health benefits of wearing sunscreen—the best thing to do would be to arrange a large, diverse group of newborns and split them in two. One half of the group would wear sunscreen containing oxybenzone regularly for their entire lives. The other wouldn’t use sunscreen at all. And actually, if you wanted to be really thorough, you’d probably have a third group that used only sunscreens without oxybenzone—of course, you’d have to be sure their sunscreens didn’t contain any other chemicals of unknown toxicity, lest the resulting health problems muck up the results. Then we’d follow them to see what diseases they developed, and when.

Aside from the sheer impracticality of such a massive and longterm study, it would probably be pretty unethical: if we suspect that something is harmful—whether that thing be never wearing effective sunscreen or consistently dosing yourself with a potentially dangerous chemical—we can’t just sign people up for a lifetime of risk for the good of the rest of us.

How do I protect myself from the sun?

But there are basic guidelines we should all continue to try to follow. The American Academy of Dermatology (AAD) recommends everyone wear a daily SPF 30 sunscreen (especially children, as early sunburns are strongly correlated with skin cancer later in life). The AAD doesn’t care if you use mineral or chemical products, but make sure that whichever you choose has been independently vetted; not all products actually keep the SPF promises they make. Consumer Reports announced that none of the mineral sunscreens they tested in 2017 performed well enough to meet their ratings.

For now, it’s important to remember that no one has proven that oxybenzone is bad for you. And the best evidence we have still says you should protect yourself from the sun. We may soon have more oxybenzone-free options, as there’s been a push to get newer sunscreen ingredients that have already been passed muster in Europe (where sunscreen is treated as a cosmetic and not a drug) legalized on our shores. But until they appear, if you’re concerned about sun exposure and sunscreen, you can always just cover up instead. Maybe 2017 should be the year you bring big hats and bell sleeves back into style.

“The principal protection against the harmful effects of the sun should be clothes,” said Gonzalez, “and sunscreens should be used solely as a supplement.”