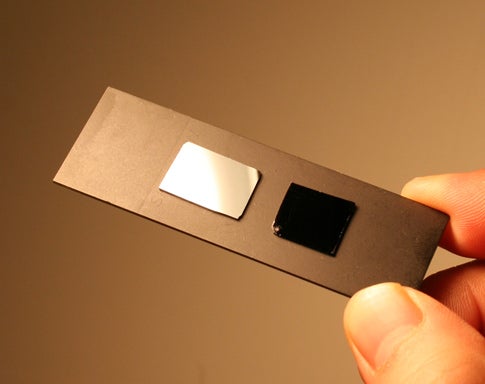 A Funnel For Sunlight

Solar panels convert the most light into electricity when the sun shines directly on them, but as soon as it wanes, so does efficiency. A new antireflective film coating could help panels collect sunshine at 96 percent efficiency from nearly any angle. Developed by scientists at Rensselaer Polytechnic Institute, the film consists of seven layers of nanoscopic silicon and titanium-oxide rods arranged in increasing densities, with the topmost nearly as porous as air.

This funnel-like setup captures light from almost every direction and focuses it onto the photovoltaic panel while also inhibiting reflection. The film, which is about one hundredth as thick as a human hair, could easily be applied to any solar panel, says lead researcher Shawn-Yu Lin, and would help collect 20 percent more light while eliminating the need for the expensive hardware usually used to rotate solar panels as the sun moves. Before Lin can sell the film, he must find a way to protect the outermost layers from the wind and heat, a process that he says may take another year.

California-based Save the World Air, Inc., says its Elektra fuel pump add-on can improve a big-rig truck’s highway fuel economy by as much as 10 percent. That could cull a trailer truck’s diesel intake by more than 2,000 gallons a year, says Joe Dell, the company’s vice president for marketing, saving a typical 1,000-truck fleet two million gallons. The thermos-size device is based on technology from Temple University that thins fuel with an electric field, creating smaller droplets that burn more thoroughly, which yields more energy and pumps less unburned fuel from the exhaust pipe. The company will test a refined, smaller version of the device this year and could have a model ready for diesel cars by 2011.

Engineers at the University of Oxford recently tested a 1.5-foot-wide prototype turbine that generates energy by spinning in the tide like the blades of a push lawn mower. The cylindrical turbines could be roughly 10 percent less efficient than fan-shaped turbines, but each rotor’s size—the full-size versions will be 33 feet in diameter and 200 feet long—and the ability to link multiple units means they can harness more energy for less money. Spanning an entire river with the six-megawatt turbines could save 40 percent per megawatt on manufacturing and 60 percent on maintenance. The engineers are lining up funding and plan to evaluate a full-scale device next year.