We waited, we watched, and for the most part, we were disappointed. But the lack of visual fireworks during last … Continued 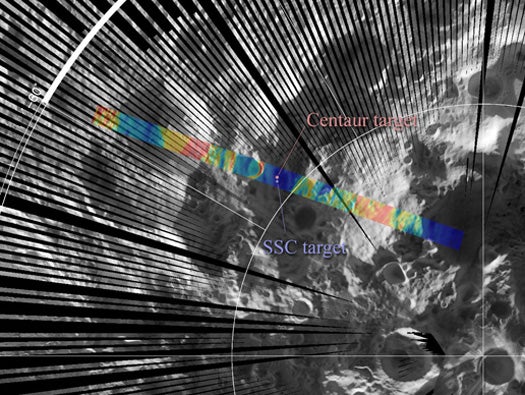 We waited, we watched, and for the most part, we were disappointed. But the lack of visual fireworks during last week’s “moon bombing” doesn’t mean the mission was a scientific dud. Though the empty Centaur rocket stage that crashed near the moon’s south pole didn’t throw a massive plume of lunar debris up into the sunlight as researchers wanted, the Lunar Reconnaissance Orbiter snapped some images of the crash site that shed some light on the situation anyhow.

During the LCROSS mission, the empty rocket stage impacted the crater Cabeus in hopes that it would send a plume of lunar soil and, hopefully, shooting high above the crater walls and into the sunlight. Following four minutes behind, the LCROSS spacecraft could take photos of the plume and beam them to Earth before also impacting the lunar surface. While it’s unclear whether the rocket stage threw any debris high enough to be spectroscoped by LCROSS, the LRO snapped thermal images of the impact sites just 90 seconds after the two impacts occurred, images that could have great scientific significance.

Because of the lack of atmosphere on the moon, the LRO can orbit a mere thirty miles above the lunar surface, and as such can scan the moon’s surface with an array of instruments, including a thermal scanner dubbed Diviner. As the LRO passed overhead, Diviner detected impact sites in all four of its mapping channels. The LCROSS impact feature is thought to be far smaller than a Diviner footprint, so its detection suggests substantial local heating around the impact sites.

That heating is significant because it can help NASA researchers determine how much water may have been present around the impact sites. While there’s still no concrete evidence that vast, exploitable ice reserves exist on the lunar south pole, the LRO photos should provide some idea of how much water might be present near the surface where the LCROSS impacts occurred. A more developed analysis of the LCROSS mission’s findings should be available in the coming weeks.