From research to reality, and the key steps in between. 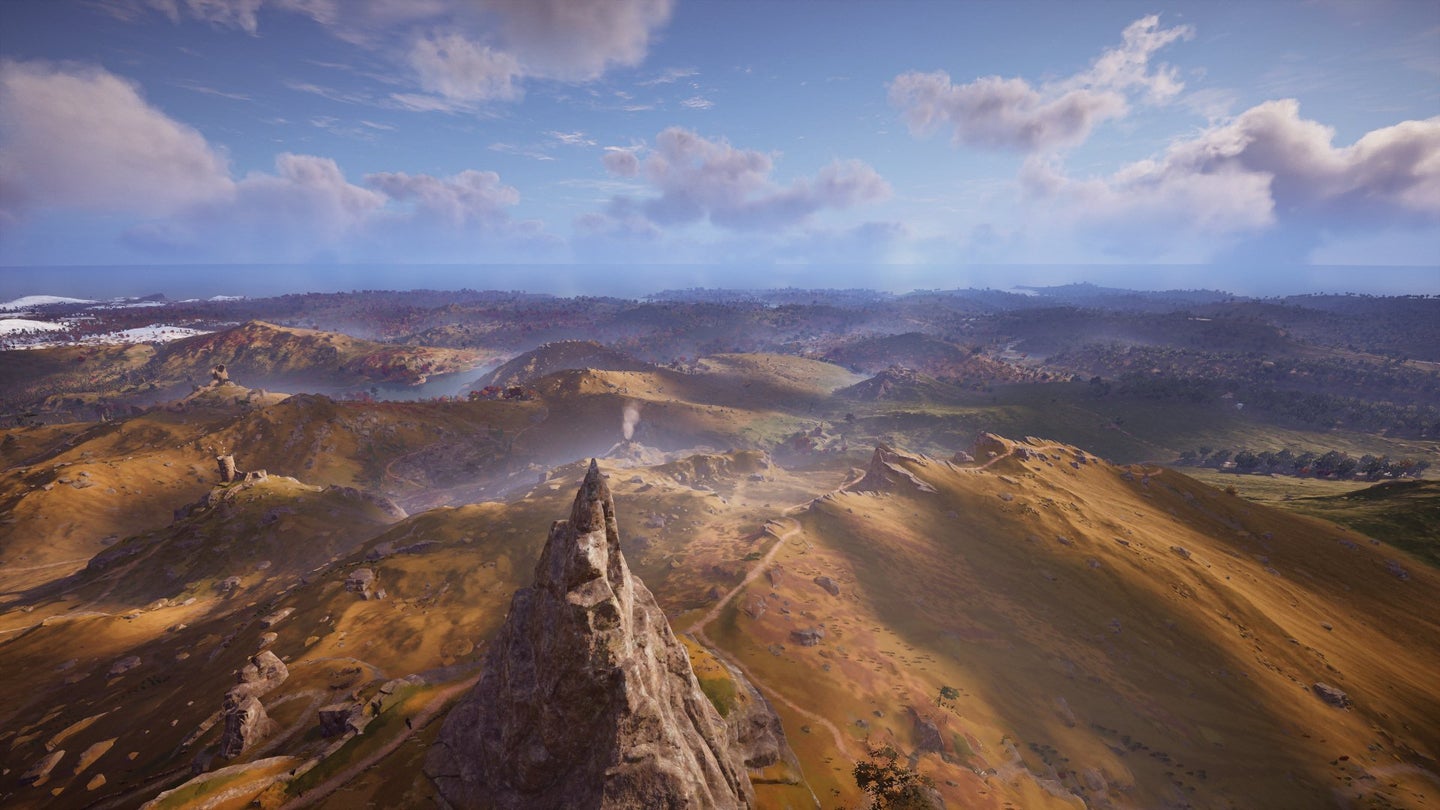 From the top of Manstone Rock, you can see all of England as it appears in Assassin's Creed Valhalla. John Kennedy
SHARE

On the western edge of England in Assassin’s Creed Valhalla, looms Manstone Rock, an imposing quartzite spire with a 175-foot waterfall at its base. From the top, it’s easy to see the entire in-game world, from the snowy mountains of Northumbria to the dull blue English Channel in the south. But there was a time when that scenic view was nothing more than a patchwork of bland, distorted polygons ripped straight from Google Earth.

How the world of Valhalla began

Crafting this sprawling recreation of 9th century England started much like the world-building process for the other titles in the 12-game franchise. The moment Ubisoft settled on a Viking-centered story for the 2020 release, its development team dove deep into research. They investigated the history, geography, environments, and structures of the land they wanted to bring to life.

For Ubisoft level design director Philippe Bergeron, that meant reading books, looking for photos online, watching documentaries, and brainstorming the best ways to recreate historical events while tying them into the game’s multifaceted plot. He estimates the research phase took about six months—within the realm of reason for such a game.

Then came the rough draft. To get a first look and an overview of England and Norway, the team pulled data from Google Earth. This digital representation of our home planet provides details about the land, elevation, and structures that are critical to building a credible recreation of what real Vikings may have seen when they boarded longships and crossed the North Sea in 873.

With the right tools, anyone can snatch a 3D mesh model of a location from Google Earth and play around with it, and Bergeron says this data grab has been a foundational part of the Assassin’s Creed world-building process since at least 2015. Before that, designers relied on publicly available topology maps and historical city layout sketches (which they still use), he explains.

[Related: Use Google Earth and Street View to explore the planet from your couch]

Once the development team has this digital reproduction in hand, they clean it up and rescale it so it works within the constraints of Ubisoft Anvil, the newly renamed game engine the company’s titles run on. The result? The first playable terrain layout.

“It’s not a documentary—we’re not making a historical game,” Lacoste says. “Facts are good, interesting, and inspiring, but they aren’t the only pillar we need to create a strong vision and experience.”

While the Google Earth data is helpful, it only provides a rough starting point. The development team uses that basic mesh for inspiration.

Let’s revisit Manstone Rock. In reality, the view from the top is fairly uniform: blunt hills covered in grass, heather, and occasional patches of trees as far as the eye can see. The Valhalla version, however, towers over a more varied landscape of peaks, forests, rivers, and knolls.

Scale matters even more. The true distance from Manstone Rock to the eastern coast of England is 226 miles. It’d take about 75 hours to walk that far. Not only would players likely ditch the game if they had to spend that much time traveling, but Valhalla‘s physics would get progressively worse the farther you got from the center of the world, Bergeron says. In the game, the cross-country distance has been scaled down to about 5 miles.

As the environment shrinks, the development team focuses on architectural and natural landmarks. They move locations and features around to create a world players will enjoy. Lacoste says credibility is most important when building the natural world, so the team makes sure to consider erosion, landscape variety, biome distribution, and how manmade structures fit into nature.

[Related: Why we still haven’t figured out what Stonehenge was for]

That scaling process sometimes saps the majesty from mountains, and rolling plains can become too plain. So the team amps up the height of ridges and hills and adds undulations for flatter areas, Bergeron says, stressing that the ultimate goal is to keep the world recognizable while still fun.

The same goes for buildings, some of which get a height boost so there’s a sense of vertigo while climbing. The extra height also improves what Bergeron calls “readability.” Simply put, the easier the game is for players to “read,” the more quickly they understand what they have to do and where they have to go.

Once the team starts getting a sense of overall scale, elevations across the country, and drops placeholders for towns and landmarks, it helps them see what is visible from where. “Then you understand better how you need to modify your terrain to cut some of those lines of sight so the world does not look like it takes place in a small bathtub,” Bergeron says.

For example, the Valhalla development team realized it was possible to see the distant settlement of Jorvik (York) from Manstone Rock’s home region of Sciropescire, and they didn’t want such clear visibility. So, they decided to enhance some hills and mountains in between while lowering the Northumbrian city, Bergeron explains.

When they’re done with Google Earth, they dump the imported terrain and build a new world from scratch that accounts for all the observations from the draft phase.

World-building isn’t confined to screens and keyboards, either. The development team took two in-person scouting trips to Norway and England while working on Valhalla. The first was spent exploring, capturing high-level references, and figuring out what they could bring to the game. The second was more technical and involved trips to specific locations, Lacoste says.

“We didn’t want to show just the cliche of what people think it should look like,” he explains. That meant avoiding a depiction of Dark Age England that was gritty, violent, and dreary—vibes that permeate many other games, films, and TV shows set during the same time period.

Instead, they wanted to craft a more nuanced version of England, with changing moods, varied landscapes, distinct seasons, and vibrant colors. “You can consider it a love letter to the country and its natural beauty,” Lacoste says.

These trips helped the team define the game’s style and feel. They shot photos, video, scanned textures, and even got physically active. “Activities like kayaking in fjords in Norway, witnessing the northern lights in the Lofoten Islands, and walking the Peak District in England were the best inspiration we got as a team,” Lacoste says.

Visiting locations also helped the team use photogrammetry to build the multinational world of Valhalla. Through this process, the team was able to turn images, including those shot by aerial drones, into gameworld details.

The structural world of Valhalla is substantial on its own, but it’s nothing without light and color. With seven people working full-time just on lighting, these intangible characteristics breathe life into England, Norway, and other regions (the game’s upcoming expansion, Wrath of the Druids, will add Ireland, for example).

Lighting is particularly technical, and accuracy is crucial, even in a stylized game depicting an interpretation of the real world, says Virginie Cinq-Mars, an associate art director at Ubisoft. Albedo charts, which show exactly how much light is reflected and absorbed by specific materials, are incredibly important, she says. Photogrammetry is key here too, because pictures of surfaces in near-perfect lighting helps immensely when recreating them for the game.

Although accuracy is paramount for lighting, credibility creeps back in when it comes to colors. A photographically accurate representation of any location would be far less interesting than an artistic interpretation, Lacoste explains.

Beyond its visual appeal, color helps players maintain a mental map of the landscape, which is still quite large despite being significantly scaled down. That means each region has a unique color palette and static seasons, Lacoste says.

Norway and Northumbria are frozen in a perpetual winter, leaves flutter to the ground across Mercia during a vibrant fall, and Wessex blooms with a lush summer. Norway is also home to spectral auroras, and the northern lights are a prominent theme throughout the game.

Lacoste considers the visual diversity featured in Valhalla the strongest and deepest of any Assassin’s Creed game and says the differences help the player feel like the world is changing around them as they discover new lands.

“These elements can look simple, but are key for immersion and beauty of the experience, strengthening the visual identity of each different region,” he says.

With so much to do, many of these art and design choices fade into the background as you hack, row, sail, ride, and sneak your way through the world of Valhalla—and they’re supposed to. But after clearing a particularly hard fortress, take some time to take in the sights. And if you make the steep climb to the top of Manstone Rock, don’t miss the pond at the bottom when you jump off.