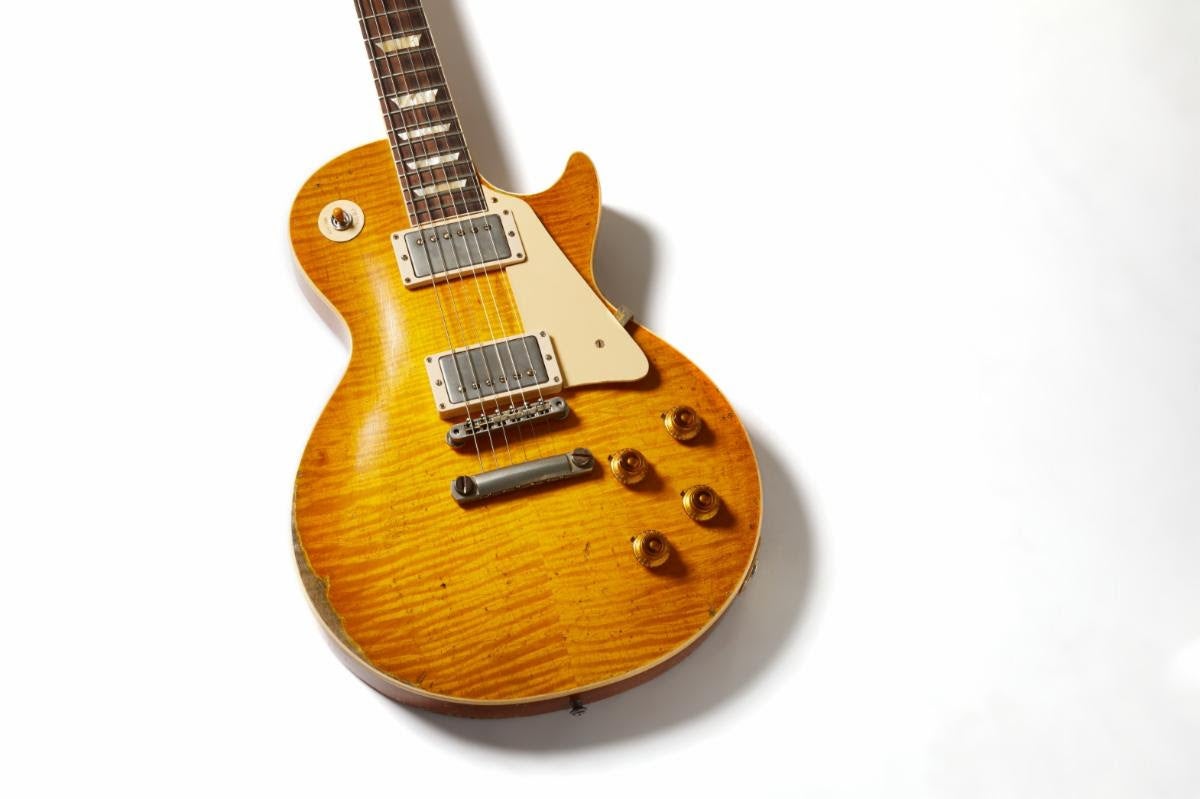 There’s an area inside Gibson’s Nashville, Tennessee custom guitar shop that’s totally off-limits to visitors, even if they’re rockstars. It’s called the Gibson Murphy lab, named after iconic guitar expert Tom Murphy. Inside, the company creates brand new guitars treated with a hyper-accurate aging process designed to make them feel like they have been played hard on tour for decades.

The Gibson Murphy Lab guitars use modern electronics, so they still have the sound you’d expect from a custom Gibson, everything else on the body is aged to match its era. That includes everything from worn fretboards to the worn patch on the back of the instrument typically referred to as “belt rash,” because it typically comes from hitting a buckle over and over again. The end result is a comfortable instrument that looks as good as it sounds.

According to Cesar Gueikian, Gibson’s Chief Merchant Officer, the project began when Tom Murphy came to him with what he thought was a vintage guitar. “He came to my office about two years ago with a case,” he said during a phone interview with PopSci. “Inside there was a 1969 Les Paul. My first reaction to the guitar was ‘OK, Tom, whose ’59 is it and is it for sale?’ And he said “it’s not a ’59 made in ’59. It’s a new ’59 made in the custom shop. that I just put through this new process.’ That’s when it clicked.”

Every Gibson guitar gets a coat of nitrocellulose lacquer to protect the wood structures. As that lacquer ages, it develops an elaborate pattern of small cracks. People in the guitar community call this process checking. It’s an essential part of making a guitar appear aged. “Somebody who doesn’t know better will try to age a guitar and they’ll grab a razer and start checking the lacquer,” says Gueikian. “You have to look at how that particular model and that particular wood reacts to decades of aging and checking.” An experienced expert can often pick out fake age almost immediately.

While the Murphy lab team have some of the most experienced eyes in the industry for this kind of detail, Gibson relies on high-res 3D scanners that take thousands of images of each guitar over a roughly two-hour period. In order to build the Murphy Lab collection, the company dipped into its own vault, scanned original guitars from customers, and Gueikian even volunteered some of his own personal collection to become part of the lab’s reference library. “Every time we get an original instrument, we put it through that process scanning, we do a very detailed photographing of it,” he says. “With all that information, there’s no guessing in this process. We’re drawing on originals.”

Scroll through the Gibson Murphy Labs Collection page and you’ll find a litany of iconic models. It’s a murderer’s row of classic instruments, including the ’50s-era Les Pauls, ’60s SGs, and even a couple 1963 Firebirds. Prices range from just over $4,000 up over $10,000 depending on the model of guitar and the amount of aging customers want to apply.

Gibson offers four aging options, from ultra-light to ultra-heavy. The light end of the spectrum will get you a guitar that’s gently broken in and comfortable. The ultra-heavy option will get you an instrument that looks like it’s been played hard every night for decades. According to Gueikian, demand is distributed relatively evenly for the different wear options, but the ultra-heavy backlog is larger due to the increased production time. He says a Les Paul from the custom shop typically takes 15 days of work and an aged version will roughly double that. Ultra-heavy aging adds even more time.

Right now, the Gibson Murphy Lab offers the guitars in its collection, but truly custom buyers can also apply some of the effects to guitars of their choosing. This flexibility comes in handy for projects like creating authentically worn guitars for movies. “We did the guitars, the J-45 and the ES 345 for A Star Is Born,” says Gueikian, referencing the 2018 remake. “That movie was supposed to show the end of a career for a musician. Those guitars were supposed to have been played for years so we couldn’t show up with new guitars.”

The guitars for sale from the lab right now aren’t exact replications of artsists’ guitars, but the company can clone an instrument using the same process. Gibson used Murphy Lab techniques in 2020 for the Artist Series version of Tool Guitarist Adam Jones’s ’79 Les Paul Custom. So, if a rocker has their cherished guitar scanned into the Gibson archive and loses it on the road, they don’t have to lose the feel of it forever. Gibson can make a clone that plays just like the real thing.