The stealthy SMX31E would be powered by lithium-ion batteries, like a Tesla. 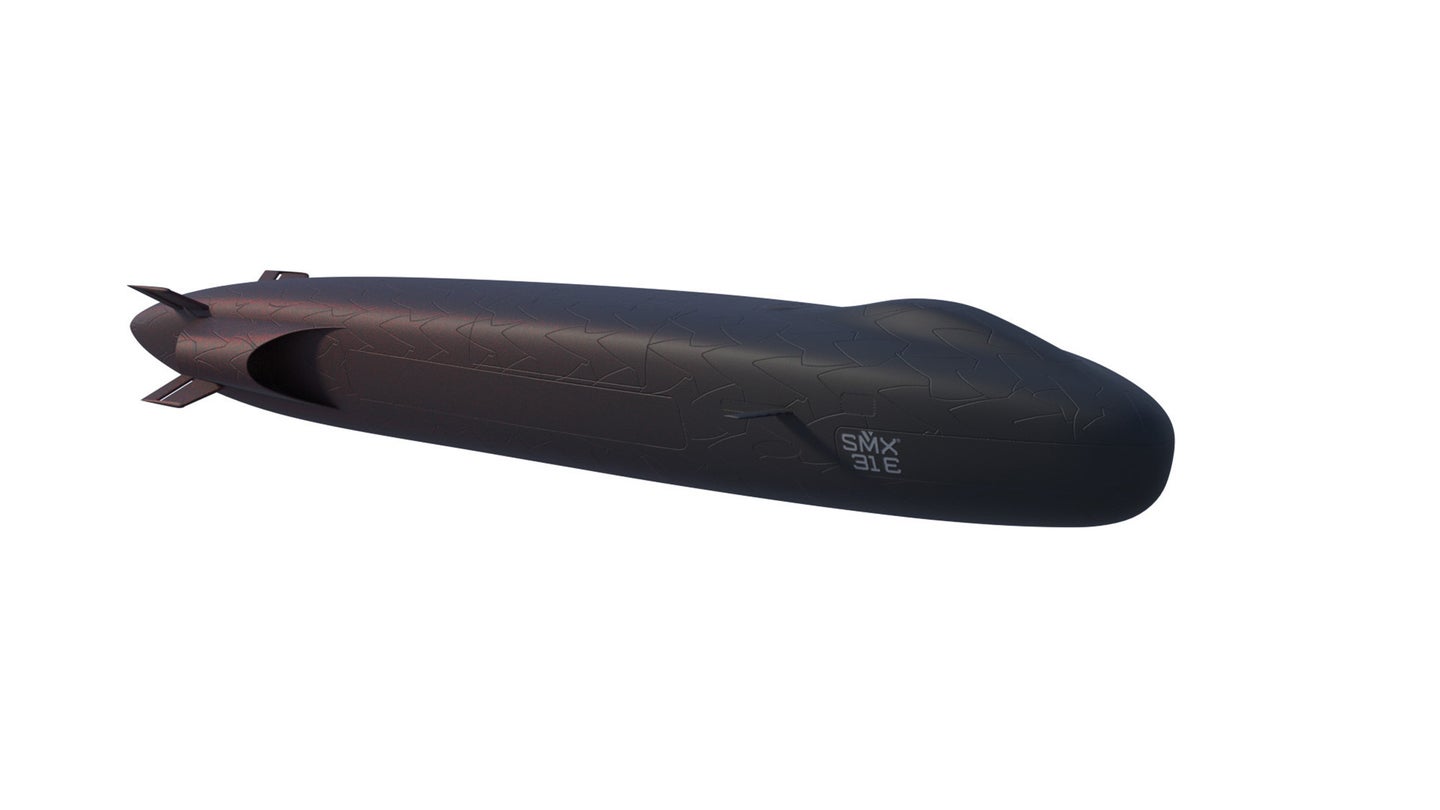 The SMX31E would be 262 feet long. Naval Group
SHARE

For those navies that would like to be able to field powerful submarines but cannot afford nuclear-powered vessels, lack the know-how to build one, or have other limitations, France’s Naval Group has an answer: the SMX31E, which can theoretically stay submerged for as long as a nuclear-powered boat without ever having to come up for air.

This 3,530-ton (that’s the submerged weight), 262-foot-long vessel is still just a concept—a boat that exists only on paper. But the technological components needed to build it “have already matured, are under development, or are expected to mature in the next few years,” program manager Stephan Meunier tells Popular Science.

Naval Group presented the first version, the SMX31, in 2018 at Euronaval, the world’s biggest naval and maritime trade show, which is held every two years in Paris. The interest it aroused among potential customers, and even competitors, was such that they have since pursued and honed the idea.

This year, Euronaval was held as an on-line event only in October, but the boat, renamed SMX31E, was back as a working project for a submarine that could be operational by 2040 – 2045. That’s a reasonable timeframe given that it takes a decade to design a new submarine and another decade to build it.

Meunier says that since 2018, “there’s been tremendous progress in some of the key technologies, such as coatings, unmanned sub-water vehicles [USVs], and batteries.” And so these innovations have been worked into the new version, which caters to what military strategists think naval warfare might look like in 2040. “[That’s] when we expect ocean surfaces to be entirely under surveillance and, given that surprise is the art of warfare, then we will increasingly be under water,” Meunier explains.

The SMX31E does not look like the submarines we are familiar with. It resembles a whale sans tail, and indeed, the architects studied these giant sea mammals closely to mimic their extraordinary hydrodynamics. There is no rear propellor in the traditional sense, and it has no need of a sail, which is the rectangular chimney-like structure that sits atop every submarine, because the direct-view periscope has been replaced by camera-equipped optronic masts.

Pushing the biomimetism further, the SMX31E is covered in tiles that look like fish scales. “These skin materials play a great role in reducing the noise that the submarine makes when sliding through the water, even at high speed,” Meunier says.

To achieve these speeds, the SMX31E has two, rim-driven propulsion (RDP) electric motors. With an RDP, the propeller is inside a duct, and the duct itself contains the motor that powers the prop blades. It looks like an aircraft engine, but it has no hub—the prop blades are connected to the outer rim. This technology removes the need to have a mechanical connection, or shaft, between the power generator and the propulser itself.

Accordingly, RDP systems can reduce a boat’s acoustic noise signature, a vital element for a submarine to stay stealthy and, according to the Royal Institution of Naval Architects, could also improve hydrodynamic efficiency by 7%, allowing the boat to reach higher speeds.

The RDPs are powered by electricity. In today’s submarines this is either produced by nuclear power, air-independent power (AIP), or diesel engines that charge lead-acid batteries. The problem with the latter two is that they both have to surface to recharge the batteries using the diesel generator. Fresh oxygen needs to be taken on board and the accumulated carbon monoxide, together with the exhaust that comes from running the diesel generators, must be extracted.

The submarine is at its most vulnerable when it surfaces. It has to slow down. It has to rise to the surface and then the snorkel itself, the exhaust, and the hull could be spotted.

So, in order to avoid having to snorkel at all, the SMX31E will use none of these technologies. It will be entirely driven by battery. “The SMX31E will have a huge lithium-ion battery pack,” Meunier says, explaining that the enormous strides in lithium-ion battery technology over the past couple of years means these batteries could enable the boat to stay submerged for 60 days cruising at 5 knots (5.7mph) or 30 days cruising at 8 knots (9.2mph). It will need to be plugged in to recharge.

That puts it on par with a nuclear submarine: 60 days is about how long those boats can stay submerged because they cannot carry more than two months of food supplies!

“There’s been huge progress in stocking energy. Just look at how much more autonomy electric cars have today than they did a couple of years ago,” Meunier remarks. Japan’s Maritime Self-Defense Force has sufficient confidence in them already that the last two of its 4,200-ton (submerged), 276-foot-long Soryu-class submarines, which are a little larger than the SMX31E, are powered by Li-ion batteries, as is the Taigei, the first of its new class of submarine launched on Oct. 14, 2020. (The Li-ion batteries still must be recharged using diesel generators, but don’t need to be topped off as often as the old lead-acid ones do, meaning the sub can stay down for longer.)

The SMX31E will need a crew of just 15 but have space for between 12 to 20 commandos with dedicated facilities on board. What’s more, the sub could act as a mother-ship to launch up to six unmanned underwater vehicles (UUVs) and two extra-large UUVs, the latter being deployed from a large bay on both sides at the center of the submarine.

Its 24 heavyweight weapons, naval cruise missiles, F21 torpedoes, and anti-ship missiles, would be launched from both torpedo tubes on the sides and at the rear of the vessel. This rear torpedo tube could also be used to launch and recover the UUVs.

It is unlikely that the SMX31E will be built in the exact form that it has today. But as Meunier notes, naval architects will continue to move forward with the design, adapting it to navies’ operational needs and further developing the new concepts and technological components displayed in this boat.