The V-280 Valor is the latest example of a fascinating aviation concept. 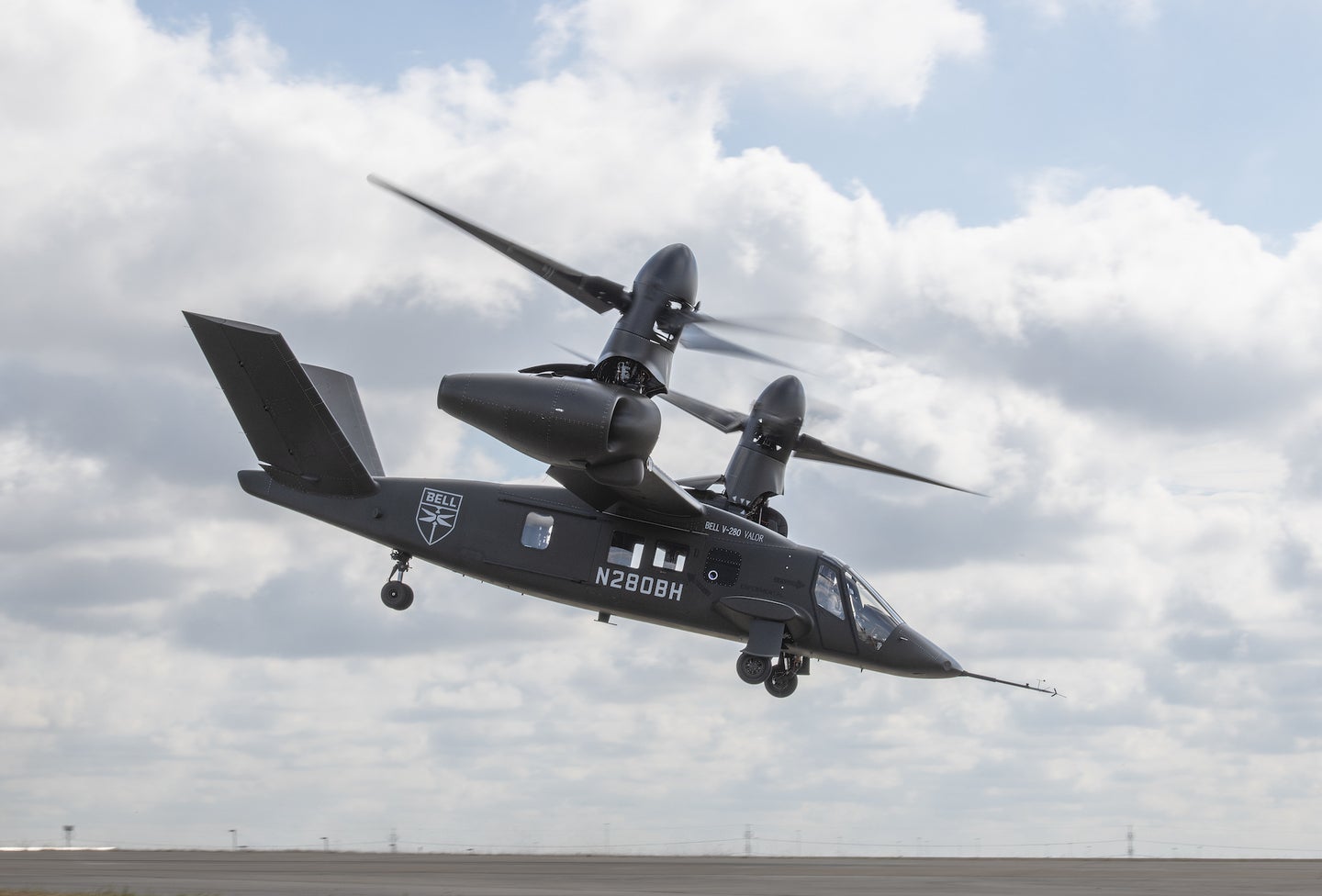 When it's taking off, the two rotors are in a position that makes the craft resemble a helicopter. Bell
SHARE

Two companies are vying to produce the next Black Hawk for the Army. The next-gen aircraft could speed quickly into harm’s way, drop off troops, and then zoom out again. Sikorsky, which makes the current-generation Black Hawk helicopters, recently revealed their progress on a futuristic machine with two counter-rotating rotors that it calls the Defiant X. The other contender is Bell, whose fancy bird is the V-280 Valor.

While the competitive program of record hasn’t officially begun yet, Bell has been flying their prototype since 2017. It takes a very different approach from the Defiant X—it’s a type of aircraft called a tiltrotor.

Here’s what to know about this fascinating machine.

What is a tiltrotor aircraft?

A typical airplane with an engine on each wing works in a familiar way. Those engines provide thrust, the wing gives it lift, and the plane takes off and lands on a runway. Now imagine that the engines on those wings were powering big propellers that could tilt. If the prop blades were perpendicular to the ground, it would fly forward like an airplane, but if the pilot wanted to take off or land vertically, like a helicopter, all it would take is adjusting those spinning blades to be more or less parallel to the ground. It represents an aviation ideal: a best-of-both-worlds configuration that’s fast in forward flight and doesn’t need a regular runway.

“There’s nothing out there that can compete with a tiltrotor when it comes to speed and range,” says Ryan Ehinger, a vice president and the program director for the Future Long Range Assault Aircraft initiative at Bell.

In fact, it’s an old-fashioned idea that dates back to the first half of the 20th century—they were long-ago referred to as “convertiplanes,” according to Richard Whittle’s book The Dream Machine: The Untold History of the Notorious V-22 Osprey.

This new craft is a successor to a famous tiltrotor from Bell called the V-22 Osprey, a bigger machine utilized by the Marines.

The V-280 has hit speeds north of 300 knots, or 345 mph. A classic Black Hawk helicopter is roughly half that fast. “We proved that we could fly very fast, and at very long ranges, because of the efficiency of wing-born flight,” Ehinger says.

But it can also pull off the neat trick of being able to take off and land like a helicopter. In a recent video, Bell demonstrated the aircraft demonstrating some sick dance moves pretty close to the deck. The V-280 is “extremely agile in every mode of flight,” says Don Grove, the chief test pilot for the V-280 Valor and a former V-22 Osprey pilot.

The differences between the Osprey and the Valor

The Valor has two engines, but unlike its larger ancestor, the Osprey, those engines don’t physically move when the rotors they power change position, giving it a simplicity bonus over the V-22. Only the rotors swivel.

With the aircraft hovering and its two rotors configured in helicopter position, it’s easy to imagine how catastrophic it would be if one of them lost power. Thankfully, the two engines on the aircraft can power either rotor, just like on the Osprey. That’s different from what happens when, for example, a commercial aircraft loses one of its jet engines—the other engine can’t magically send power over to its disabled partner.

With the Valor, two engines push power to a gear box system. “Those two engines theoretically could be located anywhere on the aircraft,” says Grove. “Even when they’re both operating normally, the flight control computers determine how much power is taken from each engine to feed the system of gear boxes and driveshafts.” Translation: Both engines power both rotors, and if one engine fails, both rotors still spin.

The Valor benefits from everything the industry has learned on the Osprey. It was the aircraft that acted as a vanguard for tiltrotor tech and also developed a controversial reputation when it came to safety. “You really need to look at it as a journey,” says Douglas Birkey, the executive director of the Mitchell Institute for Aerospace Studies. The Osprey program, he says, had to define “a radically different way of going about vertical flight.”

“Early in the program, yes, they did have crashes; they did have safety challenges,” Birkey says. “There was an incredibly thorough scrub done on it.” The aircraft being used operationally today, he adds, “is a very safe aircraft—understanding that you fly in some of the most demanding conditions around.”

Plus, there are additional ways of thinking about safety; speed is a way to avoid danger when dealing with hostile fire. “I would actually say the Osprey in a combat environment is probably safer than other vertical lift options,” he says. In fact, both Bell and Sikorsky tout the speed of their aircraft candidates. “Low and slow is really dangerous,” Birkey adds.

Grove, of Bell, notes: “Certainly, the 500,000-plus flying hours of the V-22 attest to the fact that the community learned from the mistakes that were made.” He says those lessons have been incorporated into the Valor and the Osprey.

Bell also touts another safety feature of the V-280. If it were to crash or land hard, “the wing and the nacelles—which is the engines, and the gear boxes, and the rotors—all that’s designed to break and shed away from the cabin,” says Ehinger. He compares that to more traditional helicopters, which have all the heft of those dynamic components right above the crew and passengers.

Plus, compared to traditional helicopters or even the Defiant X, there’s no tail rotor or tail propeller in the back, which can be a deadly hazard for people on the ground. The tail of the Valor is a simple V shape.

Ultimately, Grove, the test pilot, says that there’s a sizable difference between the Osprey and the next-gen craft that could be the Army’s future Black Hawk vehicle. “The V-22 is more like a truck,” he says. “The V-280 is more like a sports car.”

This article has been updated to fix a spelling error regarding Ryan Ehinger’s name.

is the Technology Editor at Popular Science. He covers aviation, the military, transportation, security, and other complex tech topics. A graduate of Columbia Journalism School, he's also written for The Boston Globe, Newsweek, The Daily Beast, CJR, VICE News, and other publications. Contact the author here.