Playing with robots has never been so fun or beneficial to growth. 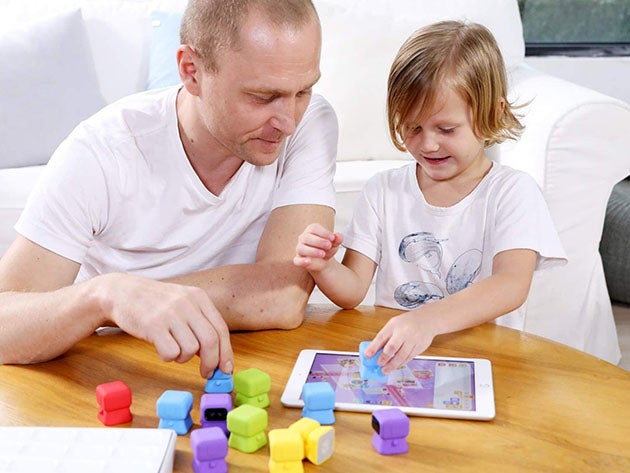 Get your kids on a path to the future while letting them have fun with this series of interactive puzzles and coding toys that challenge their minds while bringing out their inner joy.

Allowing your kids to learn coding at a young age will prepare them for the future, whether they covet a career in technology or just plan on using the most modern tools in their world.

Tangiplay is a set of 12 robot toys that interact with your children, working in conjunction with a free app available for your iPad. Your children will control the robots by pressing, sliding or rotating them, helping their creative thinking.

The games have the kids use their robots to build new railways, overcome obstacles and send passengers to their destinations.

The game is perfect for all ages, even as early as 4, starting easy with an animated tutorial to get them instantly interested. Playing these games will help them with communication, math and writing, all while building their overall self-esteem and confidence.

There are more than 120 puzzles in total, with a variety of themes and backgrounds. The robots have replaceable emoji faces to allow your kids to create their own stories. It is designed to let their freedom take control as there are no wrong decisions.

Among the early coding lessons, they will learn are iterative processes and pair programming, valuable skills that will launch them to more advanced coding if they take an interest.

These games have been honored with the IF Design Award and the Parents’ Choice Silver Award in 2020.

Tangiplay is compatible with iPads with IOS 9.0 or later, and with iPad 3rd generation or later, iPad Mini 2 or later, all iPad Airs and iPad Pro.

Tangiplay normally runs $99, which is already a fantastic price given the benefits it will bring to your children. But for a limited time, it can be had for just $84.99, a 14 percent savings.