Practice your putting anytime with this real-time simulator on sale

Adjust the green speed, distance and slopes to improve your stroke. 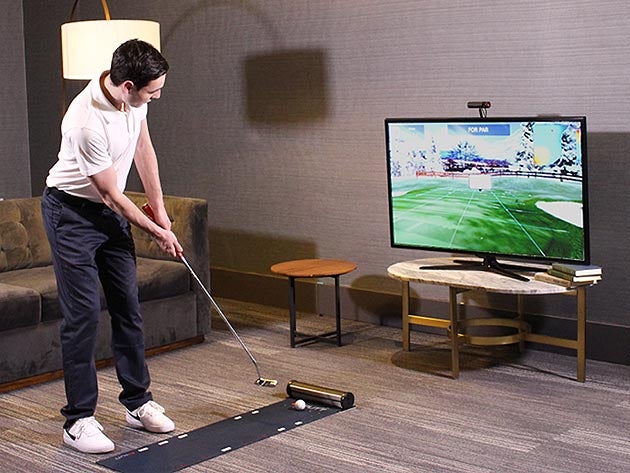 Just about every golfer has heard the phrase, “Drive for show, putt for dough.” But working on your putting can be a struggle unless you can get to a golf course practice green. At least that used to be the case, but now the Exputt putting simulator makes practicing at home easy, and it’s available for ten percent off with coupon code EXPUTT10.

The Exputt hooks up to your television or any screen or projector with an HDMI outlet. After purchase, you’ll receive a putting mat and a camera that loads the simulator when hooked up to a screen, enabling you to start putting in minutes.

The Exputt comes with practice, play and competition modes, so you can work on your stroke and then put it to the test against others.

The simulator makes you feel like you’re on a real putting green. You can putt a variety of distances, with different greens and slopes. You can set the game for spring, summer, fall or winter, allowing you to adjust for different conditions. Play with tour-level speeds to see if you’re capable of putting on glass, or set it to the slow speeds of a winter game.

An interactive at-home product on sale, this simulator can be used most anywhere, as not a lot of room is needed to set it up. The putting mat is only 40 inches by 12 inches, so it’s small to roll out and easy to store. It features a low elastic stopper to bring the ball back to you, and cancels noises for putts up to 60 feet.

So, how can such a small device be so realistic? It’s all hidden on the inside. The Exputt accurately analyzes ball speed and direction in real time, and precisely analyzes the club face angle. It also analyzes the putter’s direction at the time of impact, the the entire putting path.

Reviewers have found the Exputt to be a revelation. It is a recipient of 59 Awards MyGolfSpy.

Isn’t it time to work on your putting stroke whenever you feel like it? Then the Exputt real-time putting simulator is your answer, and it can be yours for the low price of just $359.10, regular price $399, with code EXPUTT10.