This year, space stole all the headlines. Here are our favorite stories

We Instagrammed a black hole, crash-landed tiny animals on the moon, explored the boundaries of the solar system, and more. 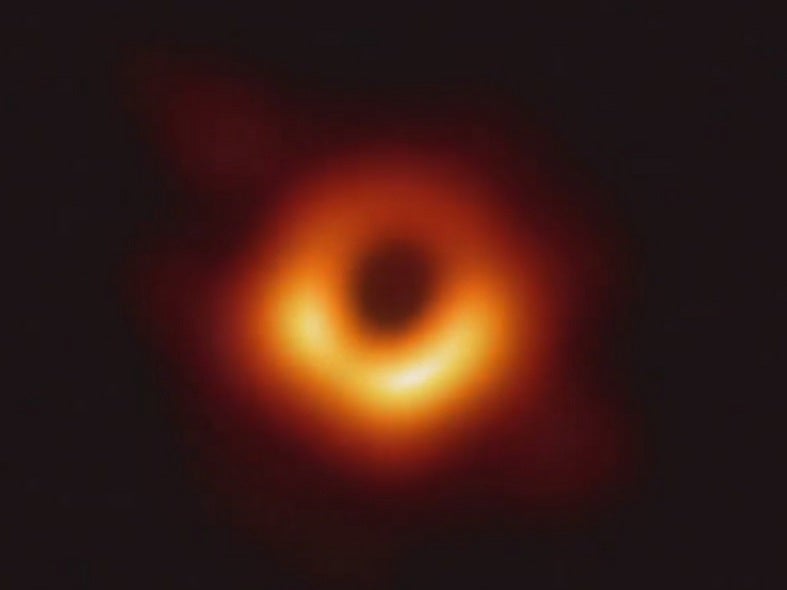 A lot happened above our heads this decade. NASA and other space agencies have pulled off an array of daring missions exploring exotic bodies from icy moons to dwarf planets. Astrophysicists tuned into the gravitational rumblings of the cosmos to find a new way to study black holes. SpaceX, Blue Origin, and other companies continued to lead the charge to open up the atmosphere and beyond to private customers. And this year, those trends showed no signs of slowing down.

Here are a few events from 2019 that made space feel closer than ever.

We took a picture of a black hole

For decades, physicists didn’t believe that black holes—regions of space so twisted that they have no exit—existed. Sure, you could write down some math to describe them, but would the universe actually allow such monstrosities to exist? This year, while continuing to listen to the titans crash together, researchers managed to snap a picture of one—thanks to the help of a network of eight telescopes spanning the entire planet. Black holes aren’t so hard to see because they’re black (their powerful pull on nearby gas tends give off a lot of light), but because they’re tiny compared to the sizes of objects we usually observe at intergalactic distances (such as galaxies). Catching a glimpse of one was like spotting a quarter on the moon from your backyard, Neel V. Patel reported.

We grappled with interstellar visitors

While we still haven’t discovered aliens, astronomers noticed an interstellar visitor swinging through our solar system this year for the second time. A few months of observations suggest that so-called Borisov is a typical comet, with a tail of vapor streaming out behind it as the ice ball draws closer to the sun. Meanwhile, two years after the first alien interloper ‘Oumuamua receded into the night, the astronomical community continues to try to make sense of its weird acceleration. While most researchers feel sure it wasn’t aliens, some wonder whether it represented a new class of object—not rock or ice, but perhaps dust.

Dust filled the early solar system, swirling together to form clumps, rocks, and eventually planets. Today the dust has cleared and the planets have been resurfaced by weather and other forces. But the rocks are still out there, and this year, two spacecraft got a close up look at these relics of our earliest days. Japan’s Hayabusa 2 explored the asteroid Ryugu, literally shooting it with a bullet and catching the debris. It also noted that the rock looked oddly clean, and may actually be an amalgamation of two asteroids. Hayabusa 2 recently departed Ryugu to bring its samples back to Earth. Not wanting to be left out of the asteroid action, NASA’s OSIRIS-REx spacecraft reached Bennu after a two-year voyage. The probe has discovered that the asteroid spits out small pebbles—unusual behavior for a supposedly inert space rock—and is preparing to collect a sample.

The moon saw a lot of action

The moon enjoyed a relatively quiet decade, but that changed in 2019. China was the only country to succeed in landing working probes on the lunar surface, with the Chang’e 3 lander deploying the Yutu rover in 2013. In January, they repeated the feat by landing Chang’e 4 and sending Yutu 2 to roam the far side of the moon—a first for any nation. A privately funded Israeli team also attempted a landing, but the Beresheet probe crashed on impact, possibly scattering some unfortunate tardigrades across the lunar dust.

And if all goes according to plan, these missions are just the beginning. NASA has set the perhaps aspirational goal of returning astronauts to the moon by 2024, and hopes to work with private partners to land a number of probes before then.

Speaking of NASA, its astronaut corps is starting to show functional signs of increased diversity. Forty-one years after the agency broadened its recruiting pipeline beyond white, male Air Force pilots, the two women astronauts found themselves next in line for a spacewalk in March. A spacesuit mix-up delayed the history making event—much to the consternation of many onlookers—but only until October, when Christina Koch and Jessica Meir stepped outside the International Space Station together. Experts say that the agency still has work to do to fully overcome its implicit historical biases, but that the recent landmarks already point to it becoming a stronger organization.

We pushed our solar system exploration to new frontiers

Robotic probes, and recent analyses from the data they returned to Earth, pushed into unexplored nooks and crannies of our solar system. In our cosmic backyard, the InSight mission felt the rumbles of its first marsquake, and the Curiosity rover sniffed new whiffs of methane on the Red Planet. At the outskirts of the system, data from Voyager 2—which followed its predecessor into interstellar space last year—helped researchers better understand the shape of the protective bubble the sun forms around the planets. Planetary scientists also used archival Cassini data to create the first geological map of Saturn’s moon Titan, and at the very center of it all the Parker Solar Probe’s record-setting close approach to the sun revealed that we don’t really understand our nearest star.

Affordable, easy space access started to be a problem

While SpaceX continued to turn heads with the first launch of its new methane rocket engine and the unveiling of a bare-bones prototype of its giant Starship, we may look back on 2019 as the year that overcrowding and pollution started to spread from Earth into low Earth orbit. A near miss between two satellites got people thinking about how we’ll manage to avoid collisions when spacecraft number in the tens of thousands, and new strings of shiny internet satellites from SpaceX photobombed telescopes worldwide, prompting astronomers to fret about whether they’ll be able to do their research efficiently in the future. With SpaceX ramping up its satellite launches in the final weeks of the year, how and whether to conserve the starry sky will be a challenge for the next decade.