Make sure your video is heard as well as seen. 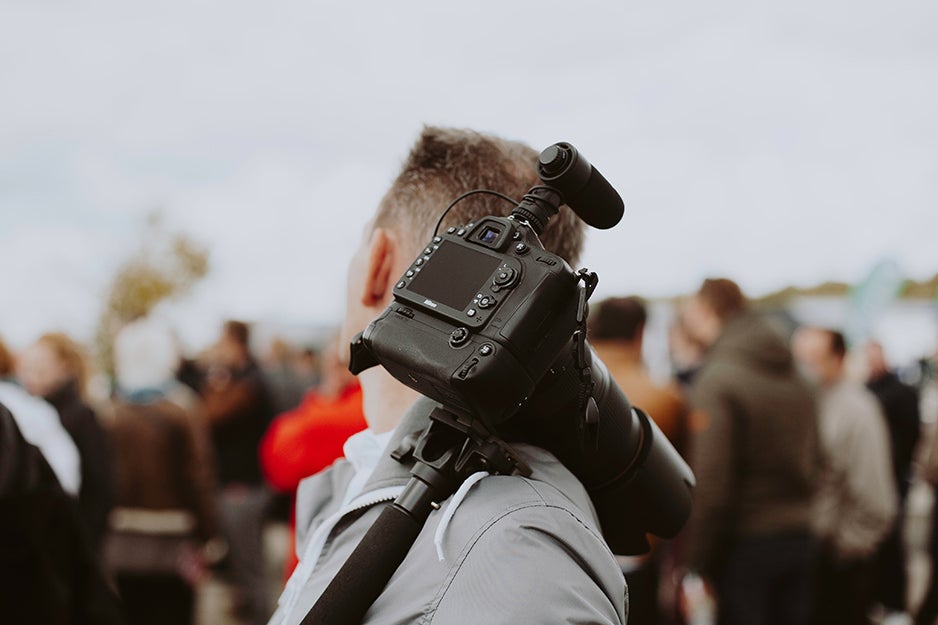 It’s an old saw of video production: Any shot can be fixed or replaced, but if you have terrible audio, your video is probably ruined. Today, shooters can choose from a huge variety of camera options—from smartphones to DSLRs to affordably-priced video cameras. Unfortunately, they all share one common flaw: lackluster, on-camera microphones. Thankfully, external mics are available in all price-points and in designs that meet any shooter’s needs. Successfully miking a subject isn’t always easy, and audio engineers spend years perfecting their skills. But with the right tools, you’ll be on your way to capturing every word of your child’s recital, a couple’s wedding vows, the corporate speaker, or your documentary subject.

Video mics generally come in two flavors: those that are designed to attach to a camera or a boom pole, and lavaliers, which are often wireless and are meant to clip on to the person speaking. Both have their pros and cons depending on the situation. The first type of mic is designed to pick up only the sounds coming from right in front of it while rejecting “off axis” sound like room echo or maybe the murmur of a crowd or ambient outdoor noises. Lavaliers, on the other hand, attach directly to the subject. They sit closer to the speaker’s mouth, which sometimes results in clearer audio. They often pick up sound from many different angles, but this is useful if the speaker is moving their head a lot while they talk. Most useful, because the lavalier is attached to the subject and connected to the camera wirelessly via transmitter and receiver units, the person speaking is free to move around while the camera operator gets different angles.

Most quality video microphones require power, either via standard batteries or what’s known as +48v phantom power, which the microphone draws from a professional camera or mixing unit. Draw is usually minimally and while fresh batteries are always recommended for each shoot, they almost always have enough juice in them to get you through the day.

Microphones are critical pieces of equipment for anyone involved in video production—whether professionally or as a hobby. It’s easy to forget about them when thinking about new cameras and lenses, but a quality mic attached to your camera can literally mean the difference between a great movie and a wasted day of shooting.

Sennheiser’s MKH 50 finds a home on commercial, TV, and movie shoots world-wide, and with good reason. Its tight, supercardioid polar pattern is designed to pick up audio directly in front of it—whether it’s dialogue for a movie or a violinist at a concert—while rejecting off-axis sound. This means cleaner audio even in less-than-optimal situations, including crowded events or rooms with a lot of echo. And the wide 40 Hz to 20 kHz frequency range captures all the nuance of a scene. The MKH 50 plugs in via a balanced XLR connector, and works equally well on a boom pole or mounted on a camera for run-and-gun documentary work. An onboard low-frequency roll-off switch minimizes rumble, and a pre-attenuation switch provides an extra 10db of headroom helps avoid distortion from extra-loud sources. The microphone does require +48V phantom power, so you’ll need to make sure your camera can output it, or else you’ll need an external power source. The MKH 50 comes packaged with a shock-mount for attaching to a boom pole, a clip for a mic stand, and a wind screen so you’re ready to rock right out of the box.

This all-in-one, broadcast-quality shotgun microphone provides DSLR shooters with a host of features they need to capture clean, clear audio. It has a wide frequency response of 40 Hz-20 kHz, with a switchable high-pass filter at 80 Hz to help minimize rumble from wind, traffic, or other low-frequency sources. An adjustable level setting switches the mic from -10dB, which is perfect for loud sources like concerts, to +20dB, which allows you to keep your camera’s input levels lower—and that reduces noise and improves your final production. A built-in 1/8-inch connector plugs into most DSLRs, and the built-in shock-mount connects to your camera using a standard shoe mount.

If your subject will be moving around, or you just don’t have space to set up a boom pole, a clip-on lavalier mic is your best friend. These microphones connect to a small, battery-powered transmitter and send their signal back to a receiver usually mounted on the camera. They’re perfect for interviews, wedding videos, corporate spots—anywhere your subject might be moving and you don’t want to be tied down with cables. The ATW-1710 can switch between multiple channels to avoid interference with other wireless devices, and features 24-bit/48kHz wireless operation for clear sound quality. The LCD display provides battery status, signal level, mute status, and channel selection for both the transmitter and receiver, and an additional 3.5mm output jack on the receiver allows you to plug in headphones to monitor your signal. The transmitters and receivers use convenient AA batteries, so you never have to run out of power on-set.

Today’s smartphones shoot gorgeous video and are wonderful tools for bloggers, journalists, or anyone looking to capture content on the go. But they come up short in the audio department, which is why the Go Mic Mobile is so handy. It allows you to use a wireless lavalier with your phone, and includes a receiver that connects to a variety of smartphones using Lightning, USB Micro B, or USB-C cables. It also has a 1/8-inch output that can connect to a DSLR or a pair of headphones for monitoring. The unit attaches to your smartphone via removable bracket-arms, which also allow it to be used on a tripod, and the entire set is small enough to drop into your pockets so you’re always ready to film.