With the loss of Arecibo, collaboration with China becomes all the more important for space research. 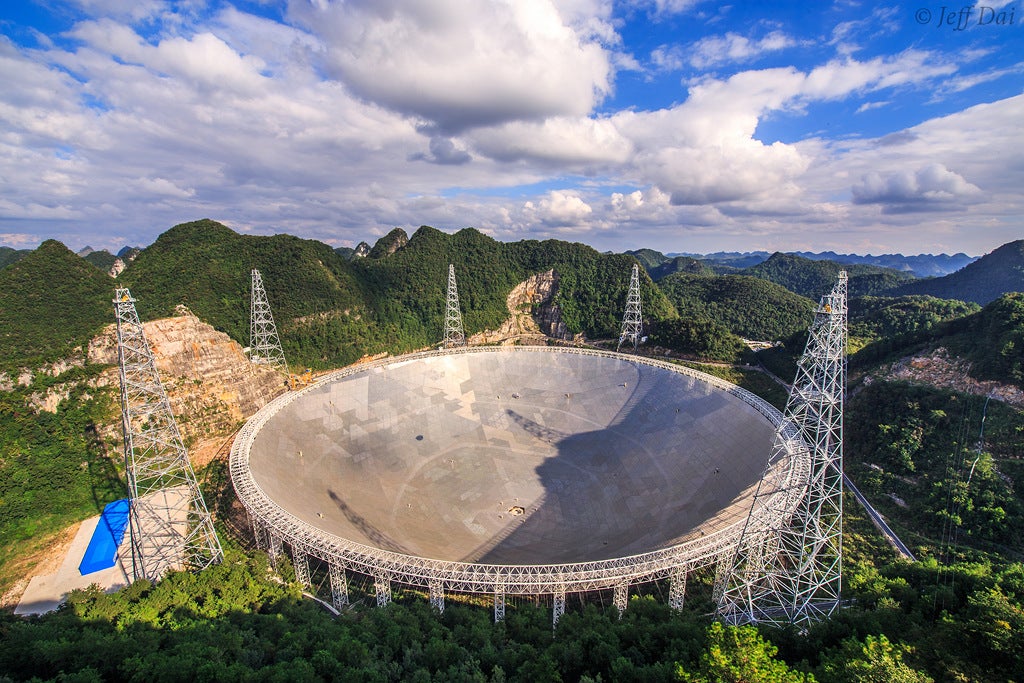 With a 500-meter-diameter face, the FAST telescope can pick up the most distant clues of galaxies and pulsars. Jeff Dai/TWAN
SHARE

Sarah Scoles is a freelance science journalist based in Denver, a contributing writer at Wired, and a contributing editor at Popular Science. She is also the author of the books Making Contact: Jill Tarter and the Search for Extraterrestrial Intelligence and They Are Already Here: UFO Culture and Why We See Saucers. This story originally featured on Undark.

In the hills of China’s Guizhou province, a natural rock bowl cradles the world’s largest single-dish radio telescope. This instrument, called FAST—the Five-Hundred-Meter Aperture Spherical Radio Telescope—is, as its name suggests, 500 meters, or about 1,640 feet, across, a size that helps scientists detect more distant and fainter objects. And in late March, FAST began accepting scientific proposals from international astronomers for the first time.

The timing couldn’t have been better. In August 2020, a support cable on the next-largest telescope of this sort—part of the Arecibo Observatory in Puerto Rico, the only telescope of its class in the US—snapped. Another cable followed a few months later. Then, in December, with a puff of dust, the massive instrument platform that once hung above the telescope crashed down, destroying the 305-meter dish.

That disappearance left astronomers like James Cordes of Cornell University scrambling. Cordes studies strange objects called pulsars, spinning cores that remain when giant stars explode at the end of their lives. The leftovers, if oriented the right way, beam radio waves at Earth, like very distant lighthouses. With Arecibo off the table, Cordes—and many other astronomers who used Arecibo to study stars’ evolution and discover distant galaxies—were left with one less option, and no option as sensitive, to do their work.

Until, that is, FAST opened to them, for the first time since its construction finished in 2016. After that initial completion, scientists and engineers spent years commissioning it and bringing it up to full scientific operation. They deemed it ready for proposals from would-be users in China early last year. “The timeline was very tight, and it was extremely difficult to get everything ready for opening to the world that time,” Keping Qiu, a professor in the School of Astronomy and Space Science at Nanjing University, wrote in an email to Undark. Qiu leads the committee that will evaluate the incoming ideas and added, “The FAST group worked very hard over the past year, and now the telescope is making the step forward” by opening up to the world.

If the international researchers’ ideas pass muster, they will get approximately 10 percent of the telescope’s time, with the remaining 90 percent going to Chinese scientists. “We expect that FAST would not only take the place of Arecibo in supporting astronomers doing good science in relevant research areas,” says Qiu, “but also make breakthroughs and open new windows for research in radio astronomy.”

This new openness mirrors the way many large observatories around the world work, in which an Open Skies policy lets anyone from anywhere compete for observing time. It also reflects China’s broader efforts to host world-class facilities that foreign researchers envy—a flex of global muscle. But scientific tensions and suspicions currently run high between the U.S. and China: American researchers have faced increasing censure for taking undisclosed money from China, the US fears its rival would like to steal intellectual property, and concrete restrictions exist for certain space scientists who’d like to work across these particular borders. Current federal law in the US, for instance, severely limits NASA and its scientists from working on projects with China and its scientists. Collaboration, it turns out, rarely comes without complication.

But American and Chinese astronomers both hope this particular opportunity will nevertheless work smoothly for both sides. “Observatories generally feel that they benefit by having an influx. The more people from more places that come through and use the telescope,” said Cordes. “It kind of lifts all boats, that rising tide.”

Cordes and colleagues are hoping to use FAST at some point for work on a project called NANOGrav (short for North American Nanohertz Observatory for Gravitational Waves). The group watches to see if pulsars’ pulses, which emit like clockwork, arrive delayed, or arrive early. In aggregate, that messy timetable indicates that ripples in the fabric of the universe called gravitational waves are stretching or squishing said fabric. But to get the job done, astronomers must spy every couple weeks on a network of pulsars, for which they had previously used both Arecibo and America’s next-largest instrument, the Green Bank Telescope in West Virginia. When Arecibo collapsed, the team was left looking for a new instrument.

Maura McLaughlin, a senior researcher with NANOGrav and a professor of physics and astronomy at West Virginia University, is also planning to suggest the FAST telescope peer at “rotating radio transients,” or RRATs—essentially pulsars that just blip on occasion. Her research group discovered a few hard-to-detect RRATs using Arecibo. With the inability to follow up using that instrument, FAST is now “really the only telescope that’s possible,” McLaughlin says.

Qiu expects to see proposals about everything from the complicated chemistry between stars to powerful bursts of radio waves whose origin remains a mystery. Loren Anderson, also a professor of physics and astronomy at WVU, is interested in what FAST could reveal about how big stars affect the space around them and inhibit new-star formation, research that can help scientists understand our galaxy’s evolution. “When they began FAST, Arecibo was operating in great health,” he says. “And now it’s dead. And so I think that makes FAST a more attractive instrument. It is now unique in the world.”

FAST will also be key to studies of neutral hydrogen gas, a fundamental building block of the universe. One FAST instrument should prove useful for that investigation. Designed and built by Australian engineers, the receiver allows FAST to observe 19 separate spots in the sky at once.

On projects like this, Chinese and Australian radio astronomers collaborate often—in part because they have an existing relationship through another telescope effort called the Square Kilometer Array, a project the US dropped out of in 2011. Among astronomy’s most ambitious endeavors, the array will comprise a network of thousands of dishes and up to a million antennas, spread across South Africa and Australia, which will together form a giant telescope.

But scientific collaboration with China can get complicated for US scientists. Recent probes at the National Institutes of Health, for instance, led to the firings or resignations of dozens of people who didn’t disclose foreign funding or participation in foreign talent programs—and 93 percent of the investigations involved China.

A 2011 policy makes collaboration particularly difficult for some federal scientists. The legislation, colloquially called the Wolf Amendment, restricts certain US government agencies from working with China without consultation with the FBI and notification of Congress. The stipulation came at the urging of Frank Wolf, then a House representative from Virginia. “He was, for lack of a better word, afraid of us giving our technology secrets to one of our biggest competitors,” says Makena Young, a research associate at the Center for Strategic and International Studies. The legislation could limit NASA, the Office of Science and Technology Policy, and the National Space Council from working on bilateral programs or collaborations with China.

Though the provision remains on the books, more cooperation has happened recently than in the past. In 2019, when China sent its lunar spacecraft, Chang’e 4, to the far side of the moon, one of NASA’s lunar orbiters snapped a picture of the rover after it landed. When it comes to space programs, Young says, “That’s really the greatest representation of collaboration in the last almost decade.”

In Young’s view, the amendment hurts scientific innovation, limiting the diversity of perspectives, and propels China to “compete even further with what we’re doing,” she says.

Outside of those federal restrictions and disclosure requirements, though, US radio astronomers can and do work with China. Green Bank scientists, for instance, consulted on FAST’s development. McLaughlin has a National Science Foundation grant that sends her West Virginia University students to China every summer. She worried about including that exchange in her grant request, thinking she might encounter restrictions or extra scrutiny, but that wasn’t the case. “We’ve had no issues with that at all,” she says.

China’s participation in the International Pulsar Timing Array, a global endeavor that brings together smaller-scale projects like NANOGrav, has similarly not affected NANOGrav’s ability to get U.S. funding, according to McLaughlin. She is grateful, scientifically and personally. “Most of the Chinese colleagues that we work with really closely, we know very well,” she says. “There’s a lot of mutual trust.”

That trust may be key to the research, since now a connection to Chinese facilities is necessary for some types of research. Many of the observations McLaughlin and her team would like to make, she said, can’t happen without such truly massive telescopes.

That China hosts the world’s largest telescope is not a one-off anomaly: The country has been amping up its global scientific presence for the past couple decades. In astronomy, for instance, the country recently launched two satellites that watch the whole sky for some of the brightest events in the universe, called gamma-ray bursts; NASA’s two gamma-ray observatories are 17 and 13 years old. China also recently built a physics laboratory deep underground, where the earth above shields it and allows for pristine data collection, and the country is planning to construct a steerable radio telescope ever-so-slightly larger than Green Bank.

On the collaborative front, China plans to share samples from its Chang’e-5 lunar lander, which plopped back down to Earth in December 2020, with the international community (although US policy may prevent some of that sharing).

Such infrastructure and collaboration help the progression of science itself. But they also function as political tools. Scientific prowess is not just the pursuit of pure knowledge: It’s also a form of what political scientists call soft power.

“Soft power is the ability to influence others through offering them things they want,” says Victoria Samson, the Washington office directorat Secure World Foundation, a space-sustainability think tank. Sometimes, that opens avenues for collaboration in other, unrelated areas, like trade. The general idea, Samson continues, follows the maxim, “You catch more flies with honey than vinegar.”

Kevin Pollpeter, a research scientist specializing in China’s space program at CNA, a think tank which works with agencies ranging from NASA to the National Science Foundation to the Department of Defense, agrees with Samson’s logic. “It’s not dropping bombs on people, or threatening to,” he says. “It’s more about how it shows you can gain influence by increasing your prestige or status.” The US aimed to be first on the moon, for instance, to show its strength during the Cold War. China has now made a huge telescope available after its competitor’s fell down. “It’s just one other example of their being able to provide something the U.S. cannot at this time,” says Samson.

Qiu says the primary motivation for the telescope’s opening is research-driven, and that the timing was based on when FAST, which passed technical inspection and scientific validation in early 2020, was ready for primetime. “Telescopes are built for astronomy, for science. And astronomers doing observational research wish to use telescopes all around the world, as long as the telescopes fulfill their scientific need,” he says. “But we will also be very happy to see that such an openness plays a positive role in bridging culture exchange and showcases the importance of international collaboration.”