These boots were made for boarding—and that’s just what they’ll do. Check out the best snowboard boots around, then head for the hills! 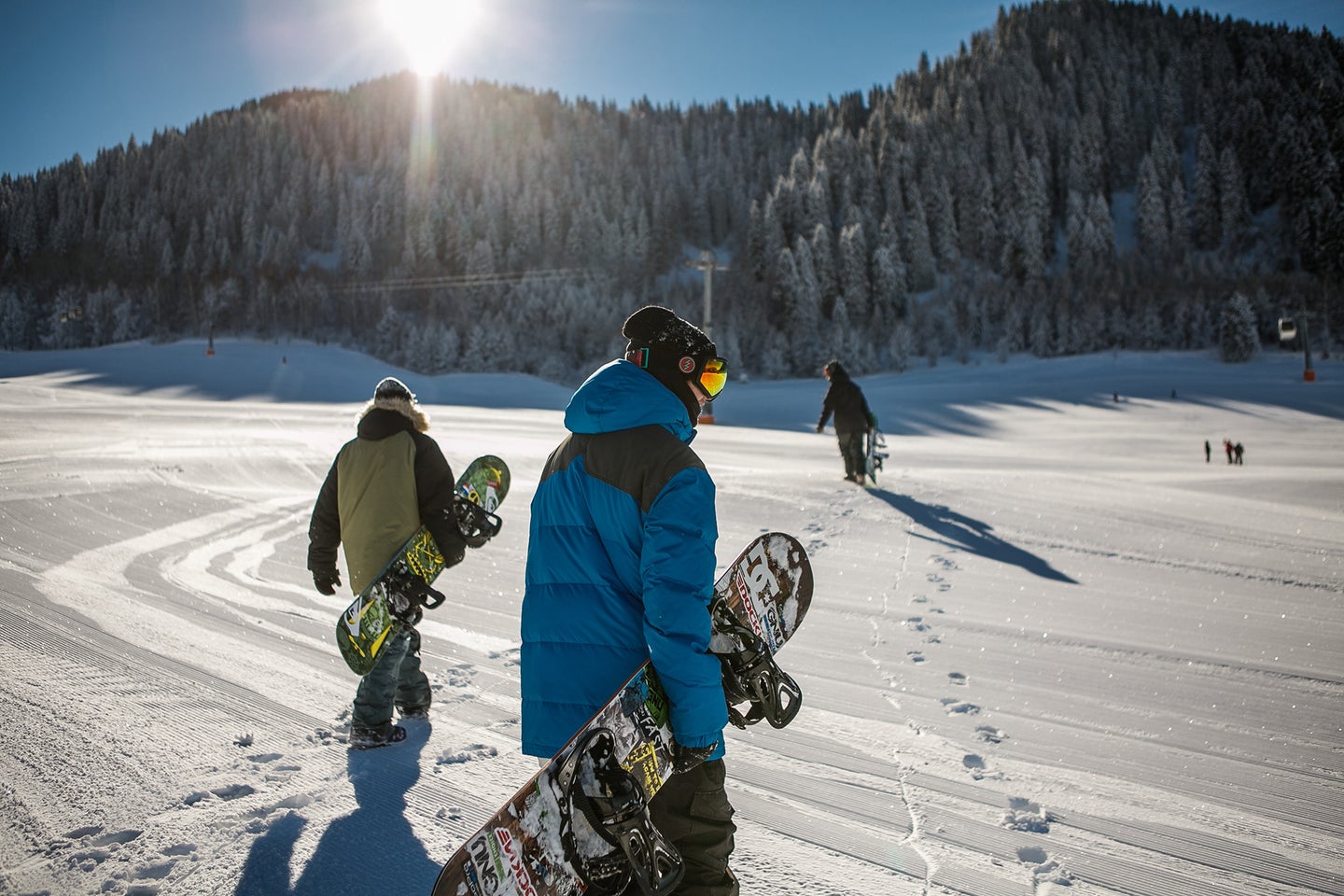 Get the best boots for your snowboard. Visit Almaty via Pexels
SHARE

Whether you’re a pro on the powder or just starting out, a successful snowboarding run starts with appropriate snowboard gear, especially when it comes to your feet. Are your boots comfortable? Secure? Not too tight but also not too loose? Unlike ski boots, which are rigid and unforgiving, snowboard boots are flexible and, in general, much more comfortable—a blessing for anyone with wide feet or any podiatric issues, like bunions, corns, or hammertoes. (Think about how distracting foot pain can be. With happy toes, you can just concentrate on the ride.) Also unlike ski boots, snowboarding boots lock in sideways (not frontways) and must be released manually in the event of a fall. That can feel jarring at first, but you get used to it, promise!

The first step in assembling a snowboarding kit is to find the right pair of boots; after that, it’s the bindings and the board. To get you going, we’ve curated the best snowboard boots out there for every level, age group, gender, price point, and style preference around.

How to choose the best snowboard boots

To find the best snowboard boots for you, think of yourself like Goldilocks: You want something that’s snug enough to hold your foot in place, but not so tight that it’s distractingly pinchy. You should be able to wiggle your toes comfortably, and when you lean forward, your heel should stay in place. And never, ever forget your socks. (A thin or medium-thickness pair will do.) You also need to make sure that the boots you’re buying are compatible with your board and its bindings. (That’s a whole other issue that includes figuring out the best board width for your shoe size, and how much boot overhang you should have—so if you’re a beginner, consult an expert.)

Once you have some idea of what you’re looking for, it’s time to start shopping.

If you plan to snowboard with any regularity, buying your own pair of snowboarding boots will ultimately be cost-effective. And if you have an uncommon shoe size or any foot issues that make finding a perfectly fitting pair difficult, buying is smart because it guarantees that you’ll be comfortable during your entire day on the mountain (and not beholden to whatever the rental shop happens to have in stock). The only criteria for the best snowboard boots, whether you’re renting or buying, is that they’re comfortable.

If you’ve never snowboarded before, rent your gear for your first time on the slopes. If you get addicted (and you probably will), once you do the math you’ll likely find that buying your own boots, board, binding, and weatherproof snowboarding gear will save you dough in the long run.

Many men’s snowboard boots, including these, boast a BOA feature, which means that they’re an easy pull-on style sans traditional laces. These also have micro-adjustable ankles, enabling the perfect fit. Their Michelin soles made out of rubber and phylon are super lightweight.

These women’s snowboard boots have medium flexibility, a 3D molded tongue, a molded footbed with heel cradle and arch support, and a performance backstay to support your spine. Note that anyone used to a traditional lace-up or pull-on style may find it tricky to put these on at first.

Little hands can adjust these babies even with their mittens on—how cool is that? A heat-moldable imprint liner will keep their feet nice and warm, and the easy BOA dial lets them easily adjust to the perfect fit. The fabric of the boot is virtually indestructible—perfect for fall-prone kids who may not treat their boots like the treasure they are.

Before the new millennium, snowboarding boots were primarily lace-ups. Then BOAs came along and changed the game. Double BOA boots feature two sets of laces: one on the inside that you tighten like traditional laces, and one on the outside that you control with the turn of a knob. (Single BOAs have one knob that controls the tightness of the entire boot.) Fans of BOAs like that tightening doesn’t necessitate glove removal, while some people complain that unless a regular lacing system, tightening isn’t uniform and some parts of the foot can feel insecure. (This is much less likely with a double BOA than a single.)

These Burton snowboard boots have a snow-proof internal gusset keeps your feet warm and dry, even after an entire day on the slopes. Something called a Tuff Cuff Lite wraps the ankle and holds your heel in place so that you get the perfect balance of stability and range of motion. Two independent lacing zones allow you to custom-fit the upper and lower portions of these BOA snowboard boots, which is particularly great for accommodating a difference in width between calves and ankles.

New to snowboarding? These snowboard boots are for you.

The best snowboard boots for someone who’s been shredding the gnar since birth may not necessarily be ideal for a newbie. In general, those just starting out should look for styles that have a soft to medium flex. Beyond that, the best beginner snowboard boots have the same specs as everyone else: The boots should be comfortable and fit right. (After all, a first-timer who spends the day in foot agony is unlikely to be interested in a second time, so choose your snowboard equipment wisely.)

Made specifically for those at the beginner or intermediate level, an ultra-cushy footbed makes sure that no matter what, the new boarder in your ranks will at least be comfortable. These Vans snowboard boots also feature an instep lace lockout and internal web harness, which provide extra support—very important for newbies. And the waffle sole looks just like the slip-on surfer Vans you wear during the summer!

How do I know if I need all-mountain snowboard boots?

All-mountain boots allow you to snowboard on nearly any type of terrain, and have a medium level of flexibility and mobility. They’re the most common types of boots because of their versatility. If you’re not sure what kind of terrain you’ll be riding on the most or you want the option to try all different parts of the mountain, this is the pair for you.

A heat-moldable foam liner conforms to your feet and keeps these Adidas snowboard boots warm and comfortable, while an inner ankle harness secures your foot inside for a no-slip fit. These promise a smooth, powerful ride. They’re particularly great for anyone who’s not a fan of BOA boots.

Do you have extra-wide or pain-prone feet? Don’t fret—there’s a boot for that!

Long gone are the days when only those with narrow, symmetrical feet and perfectly unscathed toes were entitled to a comfortable day on the slopes. The widest snowboard boots were made for anyone who wants to hop on a board and just needs a little more room. Take that, tiny feet!

One really cool feature of this style—called Harshmellow Dampening—is impact-and-vibration absorption, which results in less foot and leg fatigue while you ride. However, these do run on the stiffer side, so if you prefer a super-flex fit, find another pair.

Best snowboard boots on a budget: What you get for under $90

Unfortunately, spending less on snowboard boots means that you get less. Maybe not much less, but the expensive pairs are expensive for a reason: They use quality materials and offer bells and whistles the cheapies don’t. (And the cheapies are only comparatively cheap—you’ll still end up shelling out close to 100 bucks.) If you can spare it and plan to have your boots for a long time, leveling up could be worth it. These are the eBay snowboard boots we’ve found to hold you over if you’re on a budget.

You get what you pay for when it comes to snowboard boots, and what you don’t get with this pair is a liner or any major cushioning. That said, if the cost is your main concern, with these you still get a medium-stiff flex, 3D molded tongue, and some custom-molded foam for impact.

FAQ: Everything else you need to know about buying the best snowboard boots for you

What are the most comfortable snowboard boots?

Comfort is, of course, subjective, but typically you want to find a pair with ample cushioning, medium flex (not too soft, not too stiff), and, if you have a wide foot, a boot that truly fits you. Laces also give you slightly more control than BOA styles, because you can make micro-adjustments to how tight you’ve laced.

Stiffer boots might be better, depending on how you plan to use them and your ability level. Flexible boots give you room to maneuver, which can be helpful for beginners but also pros who like to freestyle and jump. Stiff boots are best for intermediate and advanced riders; they give you maximum ankle support and allow you to go super fast.

Are snowboard boots worth buying?

If you play to snowboard a lot, definitely! Rates obviously vary from place to place, but let’s say you rent a pair for 20 bucks and hit the slopes just five times during the season—that’s $100, and for that much money, you could own your own pair. Not only that, owning a pair means that they’re perfectly molded to your feet and nobody else’s.

A final word on shopping for the best snowboard boots

Figuring out which are the best snowboard boots for you isn’t rocket science, but there are some key considerations. The first is deciding whether it’s cost-effective to buy a pair instead of renting (and the answer is yes if you plan to snowboard with any regularity). Beyond that, you’ll want to know whether you prefer lace-ups, single BOA models, or double BOAS; the different kinds of terrains you plan to board on; and whether you prefer a super-flexible soft boot or something a bit more rigid. There are loads of options out there with an infinite combination of features, so find your best boots, then get on out there!