The next generation of "instant photography" 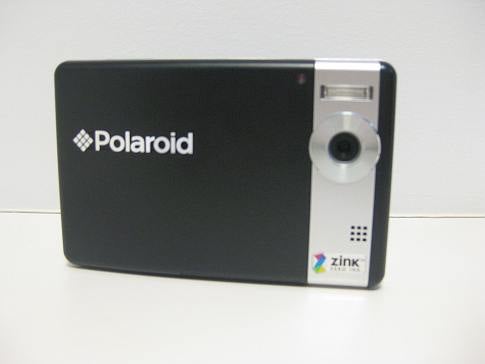 Just as production of Polaroid’s beloved instant film grinds to a halt, the company is announcing the anticipated digital version of the original “instant camera”. Debuting in spring 2009 for $199.99, the PoGo Instant Digital Camera combines Polaroid’s 2008 breakthrough pocket printer with a digital camera.

The earliest photos in my family albums are all old-school Polaroid, and I have fond memories of watching images of birthday parties and impromptu portraits emerge on the film. So my first thought about the PoGo was: can a digital camera possibly capture this mysterious magic?

While it is cool to be able to print 2-by-3 inch photos — with adhesive backs so you can stick them anywhere — directly from a camera, the answer to my question was no. The thrill of Polaroid is that you aren’t quite sure how the picture will turn out. This anticipation makes it special. The preview option in a digital camera leaves no speculation of what the image will look like, and as the photo prints out, the chemistry has already done its job: there is no murky image emergence, just a regular photo.

The camera is nice to look at, although it is clunky to carry around due to the built-in printer. I gravitate toward cameras that are one hundred percent idiot-proof because I tend to jump right in without reading instructions, which was a challenging method with the PoGo. The menu options were overwhelming, and I wasn’t able to load and print the photo paper without a trouble-shooting phone call to Polaroid (my tech guide was, by the way, incredibly helpful: it turned out I just had the paper in upside-down).

Then, after I was finally locked, loaded, and printing, I was disappointed with the results. No matter the setting, the photos were washed out and the colors that were there were a little off. However, there are some cool border options, including the white border from the original 600 series Polaroid film, a nostalgic touch that I really liked.

Overall, the camera is a nice idea. I’m looking forward to future PoGo models that have the kinks worked out, but for now I’m hanging onto my old Polaroid and stockpile of instant film.