How a Mouthguard Can Change a Game 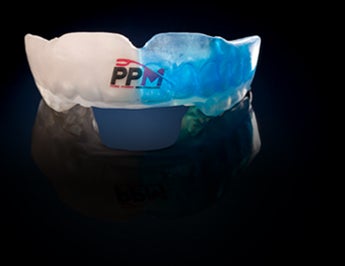 You’ve likely seen athletes chewing on them, spitting them out or sticking them in their helmet. But a high tech version of what seems part mouth fetish and part tooth protector has performance enhancing capability according to data from Pure Power Mouthguard. Research conducted at Rutgers University (funded by PPM) claims some impressive, nearly unbelievable, physical improvement from just wearing the guard. Wait till WADA gets a hold of this one.

The PPM claims that its fitting method based on neuromuscular dentistry is unlike other ‘custom fit’ mouthguards in the industry. The blind crossover study took 22 male collegiate and professional athletes and tested their vertical jump, bench press and put the athletes through the Wingate Anaerobic Test. Each athlete sat through the detailed fitting procedure for a PPM (see below). For the vertical jump (highest of three) there was a significant increase with the PPM of 67.6 vs 65.3 cm. Bench press showed no significant difference while the Wingate test showed a significant increase in peak power but no difference in average power.

So what makes this piece of plastic so special? According to PPM, as the teeth wear down due to grinding and chewing the lower jaw moves out of alignment requiring the facial muscles (maetters, temporalis) to adapt. The fitting process of the PPM finds the location of the lower jaw where those muscles are relaxed, often in the down and forward position. The optimal location for each athlete is determined by delivering a low voltage through the jaw and monitoring the muscles in the face via EMG. The bite is captured at the point of a lowest resistance and the mouthguard is built to those specifications.

Traditional custom mouthguards require just a standard dental impression wherever the jaw might rest. The more thorough PPM process can take between 80 and 90 minutes and is only possible at the office of neuromuscular dentist (just 400 nationwide currently).

While the concept of a jaw alignment effecting athletic performance might sound farfetched (okay, unbelievable) PPM notes it’s been in the literature for decades. Research studies have shown muscular reaction to gross adjustments in the jaw. Some not-so-bad athletes apparently realized the advantage early in life.

“Michael Jordan, the greatest basketball player ever, stuck his tongue out as he was driving for the basket. By sticking his tongue out, he was putting his jaw in that relaxed position. It probably wasn’t done consciously. It was something he just started doing at the age of 12 and it worked for him,” said PPM inventor Dr. Anil Makkar.

What PPM has done is adapt a more sophisticate accurate system to finding that optimal position. While the technology launched in 2006, just 1000 pro and college athletes have purchased the mouthguard. Why so few? Precision comes at a price. At $1600 a piece, you better make sure those two extra centimeters matter (and stop chewing on the mouthguard).