After a few embattled years pushing Vista, Microsoft gets its second wind 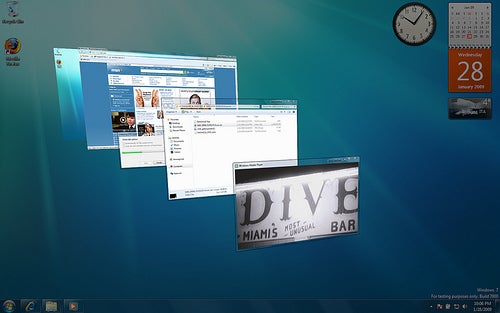 Is Microsoft finally admitting that Windows Vista is a lost cause? Well, that’s certainly not the official company line, but it does kind of seem that way to me. The embattled OS’s successor, Windows 7, wraps up a public beta in a few days and speculation is that Microsoft is planning to crown its heir to the Windows kingdom as early as the Fall. By then, Vista will have been on store shelves for less than three years. That’s not a very long time compared to XP, which was top dog for five years before being replaced by Vista—if it was ever really replaced at all.

According to Chris Flores, director of the Windows Client at Microsoft, Vista’s retirement isn’t being hastened at all. The testing of Windows 7 is merely part of the very long and very normal product development cycle. “We’re a long way from releasing this thing,” he says.

But, surely Microsoft is anxious to close the book on Vista. As the company’s own Mojave Experiment proved, the OS has a spectacularly crappy public image—deserved or not—that I don’t think can ever be repaired. You know things are grim when Jay Leno is working jokes about your product into his monologues.

“I’ll be the first one to tell you that there were people who experienced problems with Vista out of the gate,” Flores says. “A lot of these problems were compounded by the fact that there were many drivers people needed for their favorite printer or video card that weren’t ready in the beginning. That definitely caused user frustration. But, today we are very proud of the product we have.”

That’s great. But, can you hurry up and release Windows 7? Please? Like millions of others who downloaded and installed the beta over the last few weeks, I really liked what I saw. For everyone out there who hasn’t yet had a chance to play around with it, here are some thoughts.

The first thing to understand about 7 is that it is not a new OS built from the ground up. Microsoft didn’t throw away Vista and start from scratch. In fact, it’s just the opposite. “Windows 7 will be the next evolution of the great foundation we laid with Windows Vista,” Flores says.

My current Vista installation runs like a log. XP on the same computer starts up faster, shuts down faster, wakes faster, sleeps faster and generally just runs circles around Vista. So too does Windows 7—and that isn’t even finished code.

Performance aside, what really impressed me about 7 was its presentation. Whether it’s just window dressing or not, the OS has a real sense of airiness about it. It feels lightweight and clean, in stark contrast to the bulkiness and crowdedness of Vista. For example, when you boot up for the first time, there are no default gadgets already crowding the left side of your screen. I hated that about Vista. I found it obtrusive to have a menagerie already shoehorned into my sidebar before I’ve even opened a single program. In 7, the sidebar has been completely scrapped and gadgets are now free to float anywhere you want them.

The taskbar, as well, has been redesigned into a tribute to minimalism. Gone are the default icons already on there for Internet Explorer and Windows Mail. Program icons can now be “pinned” to it a là the Mac OSX dock, and open programs/windows are shown as large square icons devoid of text as opposed to the classic rectangular, bricks that now easily build up on the current taskbar once a few programs are running.

Flores also mentions simple home networking and built-in multi-touch capabilities as two big reasons for buying 7 when it becomes available—whenever that may be.