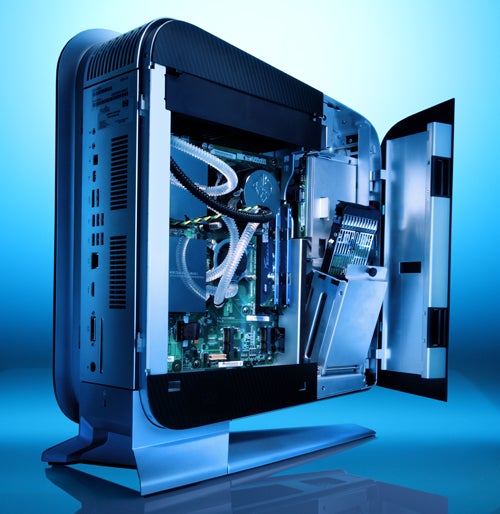 Hewlett-Packard’s Firebird looks like any high-powered desktop computer. But it whispers at less than 30 decibels, while rivals are twice as loud. It gets its muscle from a high-power desktop CPU with four processors, but laptop-style components, including three graphics cards and a pair of hard drives, keep the Firebird cool, quiet and efficient.

A graphics chip on the motherboard handles e-mail and Web pages. For 3-D gaming or Photoshop, turn on a pair of Nvidia GeForce 9800S cards. Built with chips that come from the factory with a thinner layer of metal-oxide conductor, the cards deliver about the same performance as standard models but use half the power.

A water-alcohol blend runs through tubes that pass over the main processor and video cards. This absorbs heat better than blowing air around with noisy fans.

Moving the power supply [not shown] outside the PC helps make the system two thirds smaller than its predecessor and allows the surrounding air—instead of fans—to cool it. Thanks to all the laptop parts, the supply draws 350 watts, versus 750 to 1,200 in other desktop gaming PCs.