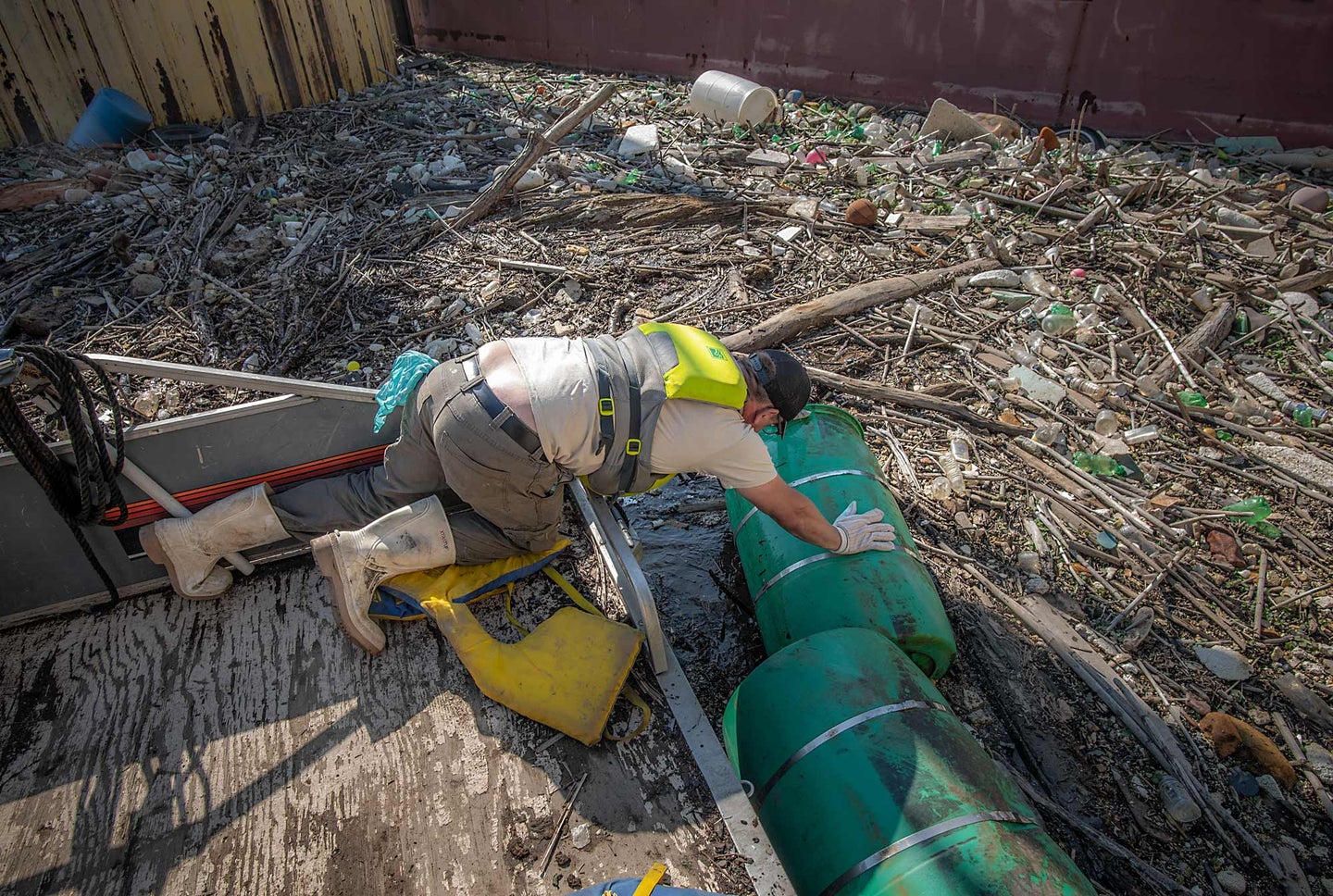 Evan Clark, a boat captain with the non-profit Allegheny CleanWays, tries to pull a plastic barrel from a debris island floating in the Monongahela River. Teake Zuidema/Nexus Media News
SHARE

Teake Zuidema is a writer and photographer based in Savannah, Georgia. This story originally featured on Nexus Media, a nonprofit climate change news service.

Hit hard by the coronavirus pandemic, Royal Dutch Shell saw its profits drop 71 percent between 2019 and 2020. Its recovery will likely be stymied by the rise of electric cars and renewable energy, which will lead to falling demand for oil and, in the US, natural gas. There is one bright spot for the industry, however. Ethane, a natural gas byproduct used to make plastic, is projected to be a growth market.

Plastic will figure prominently in the future of the oil and gas sector. A short trip down the Ohio River in Pennsylvania shows what this will look like, and what it will mean for the environment. In Beaver County, near the Ohio border, a sprawling complex of steel and concrete is rising up on the southern bank of the river. In the next couple of years, Shell will use this $6 billion facility to turn fracked ethane gas produced in the region into polyethylene, a type of plastic.

A 98-mile pipeline system will deliver up to 100,000 barrels of ethane per day to the “cracker” plant, which will “crack” ethane molecules apart to produce plastic. The plant will be a lifeline to financially struggling drilling companies in Appalachia. Plants like this may be the last best hope for the oil and gas industry.

Beyond buoying drillers in the region, however, the plant may do little to boost the local economy. The construction effort has employed some 7,500 people, though many came from Texas or Canada, and jobs are temporary. The factory will employ only around 600 people full-time.

The plant also promises to generate a lot of pollution.

An WTAE investigation found the cracker plant will be allowed to churn out more pollution than some of the biggest emitters in the state. Its permit allows the plant to produce more than 2 million tons of carbon dioxide each year, as well as more than 500 tons of volatile organic compounds, which cause headaches, nausea and damage to the nervous system. Locals fear the cracker plant will leave a trail of contamination just like the steel mills that came before.

“The pollution we have here was caused by previous plants, and now Shell is coming to add more on top of that,” says Bob Schmetzer, the chairman of the Beaver County Marcellus Awareness Community, a local group opposing fracking. “They will make their money, and then they will pack their bags when the money stops coming in, leaving behind the pollution.”

In addition to air pollution, the plant will generate a steady stream of hard-to-recycle plastic, most of which will end up as waste.

At the Greenstar Recycling plant, just 20 miles south of Shell’s cracker plant, plastic refuse piles up, but this is the tip of the iceberg. In the US, less than 10 percent of plastic is actually recycled. Another 15 percent or so is burned to generate energy. The rest ends up in landfills.

Because plastic is so polluting and so unpopular, oil and gas companies are also looking for ways to manage plastic waste. Shell joined the Alliance to End Plastic Waste, a group made up mostly of petrochemical companies, which plans to invest $1.5 billion in minimizing plastic waste and promoting recycling. But critics say such efforts are far too meager.

“It’s a trivial amount compared to the costs that are borne by the communities where fracking occurs, waste disposal takes place, and plastics end up in the environment,” says Patricia DeMarco, a Pittsburgh-based environmental consultant. “It makes no sense to produce a plastic bag that is useful for 12 minutes and then remains in the environment for another 450 years.”

Much of the plastic that isn’t burned or recycled ends up in oceans, lakes and waterways—like the Monongahela River. The Monongahela River connects to the Ohio River in Pittsburgh, some 25 miles south of the cracker plant. It is regularly full of plastic debris.

Evan Clark, who works for the nonprofit Allegheny CleanWays, drives a boat through the river every day picking up trash. He said that every single day he finds a fresh load of toys, bags, and other plastic detritus in the river. This is the end point of a system that churns out materials that are difficult to reuse and take centuries to break down.

“It really never stops,” Clark says. “As long as people use plastic, it will end up in the river.”