The most secure ways to lock up your bike 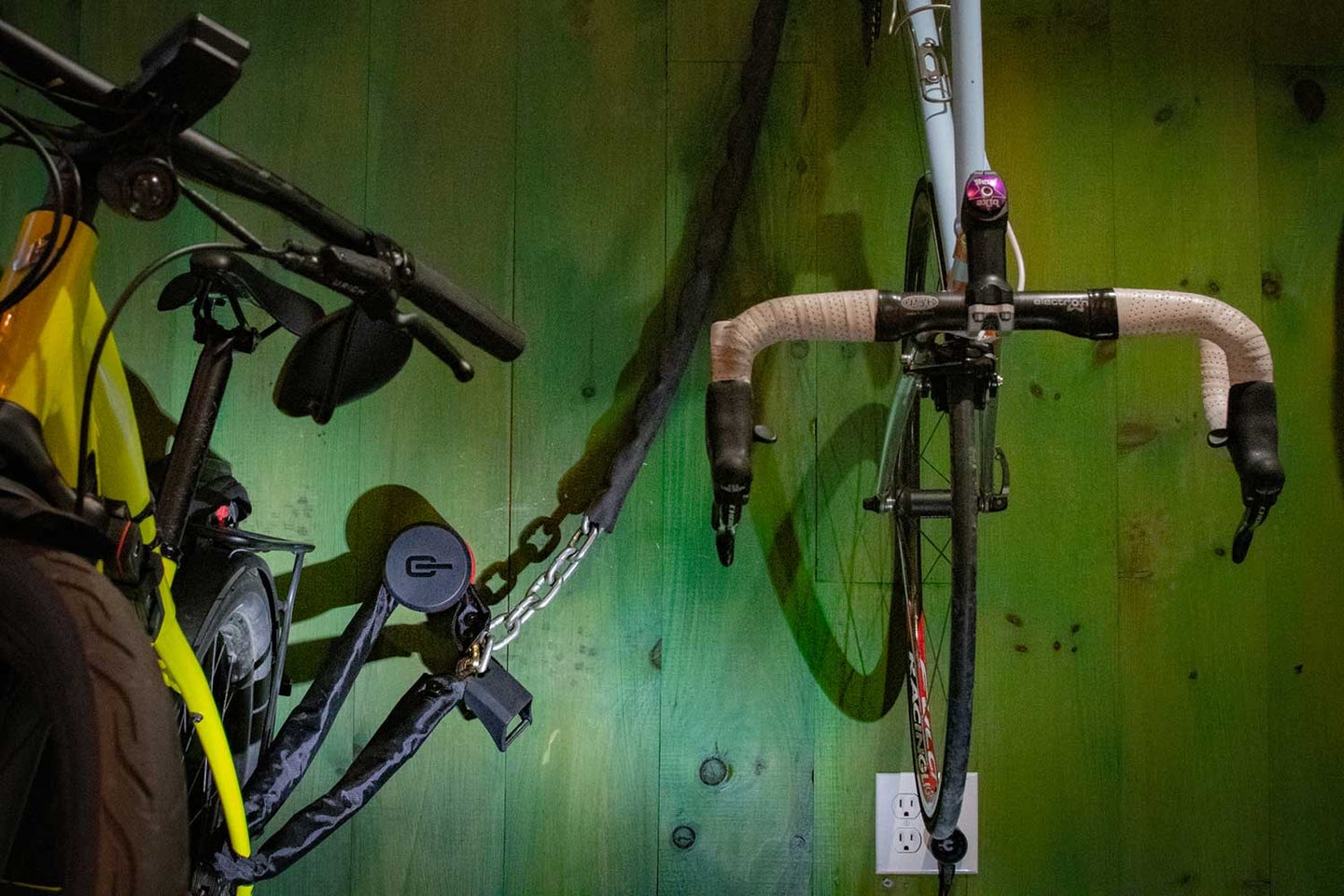 Homemade security: Here, our author has used a chain wrapped in an old inner tube and run it through a wall-mounted anchor to secure multiple bikes. Michael Frank
SHARE

Let’s get something straight as you read this guide: If a thief is determined, there’s almost nothing you can do to prevent your bike from getting nabbed, short of standing guard 24/7.

And unfortunately, according to the nonprofit registry, Project 529, over 2 million bikes are stolen across North America each year. Bikes, thanks to Craigslist and eBay, are now easy profit centers for perps. So beyond investing in a lock, make sure your bike is on your homeowner’s or renter’s insurance. And yep, register it with Project 529.

I’ve been the unfortunate victim of bike theft; I’ve had bikes stolen that were locked outdoors, and even from my home. It stinks. But I’ve also been very lucky. A bicycle is just a product. It’s replaceable. I’ve never been present for these violations, so I’ve never had to make the almost surely bad choice to try to defend my bike from someone who could be carrying a weapon. When a perp takes your belongings it screws you up psychologically. But having someone swipe your stuff is not assault. Let them have your bike; throw in your wallet while you’re at it. You only get one life. They’ll make more bikes.

But the larger point is that, presuming you’re not standing guard and only the locks are there to defend your spiffy ebike, your job is to annoy the crap out of any would-be thief. You want to make their pilferage ultra annoying. The best analogy is outrunning a grizzly. You don’t have to—just outrun the slower person also fleeing the bear.

In this case, unlike the scenario of not being eaten, your hope is the bike thief will move on to easier prey.

Two important caveats I should mention about this guide …

One, you’ll note the iZip I use in the photographs has a removable battery. It’s locked to the bike, but if you’re locking up for any extended period of time, particularly overnight, and it’s reasonably convenient, take the battery with you.

Two, this isn’t a lock performance test. It’s a primer on locking. I’ve highlighted some good options, and these brands/models are provided to give you an idea of what’s out there, and their potential virtues, but I didn’t take a hacksaw or grinder to each item to test its ability to foil a crook.

Lock the frame through the main triangle

No matter the lock, you want to snake it through the main triangle of the frame and to a fixed object. Here I’m using Hiplok’s Spin wearable combination lock. It’s a chain threaded through a padded sleeve you wear like a belt. At 1.76 pounds it isn’t too onerous to lug around, while providing just enough length at 30 inches to attach to most bikes/bike racks. That’s something to think about throughout this primer, by the way: Is the lock versatile enough to lock my bike easily? To lock two bikes to a rack on my car?

In this example I’m leaving both wheels on the bike. It’s the most basic way to lock up. They can take the wheels and the saddle off the bike, but nabbing the frame would require more work. If I’d locked through a wheel they could steal the whole bike, minus a single wheel. Hence, at least going through the main triangle creates one level of defense.

If I’m rolling into a Starbucks, in plain sight of lots of foot traffic, and the rack’s right out front, my odds are decent this is enough deterrent to ward off the baddies. But see the next few entries, because for the most part, we don’t think just locking the main frame and calling it good is actually good.

Especially when a bike has quick-release axles, it’s always a good idea to remove the front wheel and lock it through the main triangle and to a fixed object. If your lock is long enough, ideally you also weave it through the main triangle, the rear wheel, and the removed front wheel. Regardless, the moment a bike is partially disassembled it automatically makes the perp have to do more work, and that’s your goal. These are not the most enterprising folks. Make the easy into a festering mess of sweat and cursing and they’ll mosey along.

By the way, the same theory works for any lock. For example, the ABUS folding 5700 is handy because the 3-foot, 3-inch length gives you lots of room to get it around a fixed point and through the frame and rear and front wheels. Like a chain, folding locks are squirmy under a cutting device. That’s good. Make the jerk bleed for your bike and they’re far less likely to bother at all.

Have you ever stared at a complex piece of machinery, especially an exploded view of, say, a rocket engine, and wondered how it even works? That’s precisely the confounding picture you want to present to a criminal. This bike has a quick-release to hold the seatpost in the seat tube. I’ve pulled the seatpost out of the frame, inserted it through the rear triangle so that the rear wheel couldn’t roll, and locked one seat rail to the seat stay. Your perp “friend” would be forced to first cut through the chain around the main triangle and then carry (not roll) the bike to a van. They’d then have to go at that padlock or the seat rail and be very careful not to slip and cut the frame in the process. It’s a migraine just thinking about the effort involved. And that’s precisely the seed I want to plant in their sleazy skull.

I’m also showing you the Z Lok Combo from Hiplok, because even just adding another lock to a bike adds annoyance. Again, they’d have to cut the chain from the main triangle, then carry the bike to a vehicle. Or they could attack the Z Lok out in the open too. But all that takes time, and that’s a good measure of how you want to think. More time spent stealing your bike endangers the thief, and that makes them think twice. FYI, Z Loks are also long enough to thread a helmet onto the frame, and the whole jumble starts to look extra irksome to tackle.

Even if you’ve got no decent option to lock your bike to, like a rack or a lamppost, you’re never out of options. Make the job hard for the criminal, period. One of my favorite in-a-pinch hacks is to lock my bike to the metal of a few grocery carts, especially if there’s no good bike rack or post around. You could still steal it, but you’d need several people, and yeah, you’d have to hoist a couple of grocery carts and the bicycle into the back of a van or pickup. It would be a very unpleasant chore, and again, that’s the pickle you’re trying to present.

Lock it up at home, too

When we had our break-in, the two bikes that didn’t get swiped were locked to each other. Not locked to anything else, just each other. The thieves could’ve stolen them, but clearly the effort seemed too much, since it was a fat bike and a road bike and they were nose to tail. That was a useful lesson to me: Just make it a little harder.

Hiplok’s ANKR is one cool solution to home locking because you can use their chain/belt devices, or, as I’ve done here as well, a chain threaded through a sleeve of old bicycle tube that snakes up to the chainstay of that road bike on the wall. From there I can daisy other lengths of chain to more bikes, so that the one anchor point on the wall now serves as the octopus’s body, with all these arms snaking off in several directions. This is a nightmare for the thief, because they have to decide how much time and risk they want to devote to the job.

Keep them out of sight

I would add a coda to all of this. When I heard a friend had several bikes ripped off in the Bay Area, he blamed himself. He’d displayed his gems to his street, arrayed at the head of the garage, facing the road. His garage was frequently opened when he was in there tinkering. I used to do this, too. Anyone casing my property could, and probably did, see my bikes. You may not have a choice; your bikes might be visible, and there’s not a lot you can do about it. But certainly in that instance you should be practicing the mantra repeated throughout this story: Make it look hard to rip you off. Make sure eyes trained on your spread see bikes visibly locked, and yep, there should be a camera (working or not) visibly “peering” out, where perps could see that too.

Because you don’t have to outrun the grizzly; you just have to make it hunt elsewhere.