Boots for Your Tires

An alternative to chains, Snobootz wrap around your tires for extra traction in winter weather 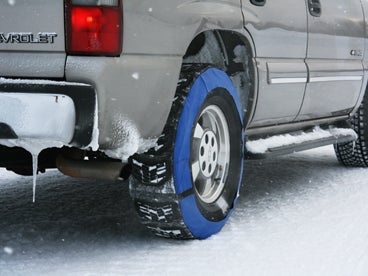 Even with a vehicle that has 4WD and high clearance, there are a few times each winter when I can’t make it up my 1,000-foot-long driveway without a little extra help. Usually that means untangling a set of ice-cold chains and then trying to secure them to my wheels before my fingers go numb…all while holding a flashlight between my teeth. Chaining up is never as quick or as easy as the instructions would suggest.

I was happy to learn of an alternative introduced this winter. Called Snobootz, it’s a donut-shaped sheath of plastic-coated fabric that you wrap around your tire and secure with Velcro-like hook-and-loop fasteners. The outer surface has raised rubber-and-steel treads that claw into snow and ice to improve traction.

The design is mercifully self-explanatory. There are no chains or cables to sort out, and no confusion about what goes where. You simply drape the Snobootz over your tires, drive onto them, and press the ends together.

But you knew it couldn’t be quite that easy, right? With two people working together — one driving and the other gauging exactly how far to inch forward — things go quickly. If you’re alone, you’ll probably find yourself jumping in and out of the driver’s seat a few times, and cranking your wheels sideways for easier access, before you have a tight fit.

Even so, I found Snobootz much easier and faster to put on than chains, including the European-style chains that can be applied while the vehicle is parked but require fine-tuning afterward. Getting Snobootz off, however, is not so easy. If you don’t already have a deep appreciation for the strength of Velcro, prepare to be amazed.

To use Snobootz properly, you have to separate the strip ends at least twice: first to reconnect them for a tight fit once they’re in position, and later to remove the Snobootz when you’re done using them. Trouble is, after several thousand pounds of SUV have mashed all those tiny hooks and loops together, peeling the two layers apart is like trying to rip the hide off an elephant. Fleece or wool gloves just make matters worse by sticking to the Snobootz. You’ll need to reach deep into your grimy wheel well, get a solid grip on the edge of the Snobootz, and pull as hard as you can. And don’t let go until the layers are completely separated, or you’ll have to start all over again. The good news is that they aren’t likely to come off accidentally while you’re driving, even if you haven’t tightened them perfectly and some snow has accumulated inside the sheaths.

I tried the Snobootz on packed snow and slippery slush. Like chains, they provide extra traction that keeps you moving on a straight line. Vehicle handling feels different than with chains, though, more like a set of really knobby tires.

In tests done by Michigan Tech University, a rear-wheel-drive SUV equipped with Snobootz accelerated from 0 to 20 mph in 7.5 seconds on ice. Using chains instead, the vehicle took 9 seconds to reach the same speed, and 22 seconds using only snow tires alone.

To work properly, Snobootz have to be precisely fitted and are not yet available for all tire sizes. Sold by Navimetrix, they cost $200 to $250 and take up more space in your vehicle than chains because they don’t lie flat for storage. Instead, they are rolled up and stored in a duffel bag. But that may be a small price to pay to avoid facing a snarl of chains in a blizzard.

Snobootz may be of special interest to people who own vehicles with custom wheels or tires. Unlike chains, Snobootz have no metal parts in contact with the wheels or tires.