After months of anticipation, Chevy releases its final Volt design 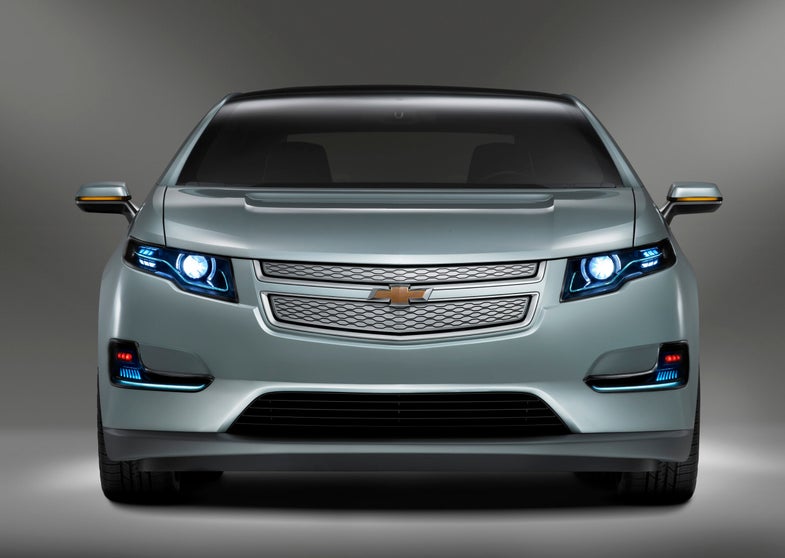 Today, after a nearly two-year tease, General Motors unveiled the final design for the car that it hopes will save the company: the 2011 Chevrolet Volt, the world’s first production plug-in hybrid. The Volt is designed to drive 40 miles on a single charge of its giant lithium-ion battery; after that, an onboard 1.4-liter four-cylinder flex-fuel engine kicks in to power the electric motors that drive the car. GM will most likely make 10,000 of the cars in the first year of production; it’s expected to go on sale in November 2010. It’s unclear how much the car will cost, though the relatively unproven lithium-ion batteries could drive the cost close to $40,000. Government incentives could help drive that cost down closer to the $30,000 mark.

It’s not an exaggeration to say that the Volt is probably the most important car in the company’s history. At a time when GM is hemorrhaging billions of dollars each quarter, the Volt is an attempt to revive the company’s reputation and steer it in a “greener” direction. For the past five years, GM has been best known in some circles as the giant corporation that killed the electric car; the Volt, GM hopes, will change that.

Today’s reveal was widely expected. Last week someone at GM accidentally posted several photos of Volt execs posing with the production design, and the photos quickly spread across the Internet. Bloggers and online commenters pretty much panned the production design, which is a major departure from the “electric Camaro” look of the concept car that GM unveiled at the 2007 North American International Auto Show in Detroit.

But the design’s dramatic lurch toward normalcy was probably inevitable. The Volt concept had terrible aerodynamics, and to get 40 miles of range off a battery pack small enough to allow for a backseat, GM designers had to do all kinds of aerodynamic tweaking and polishing on the way to the design you see today. Our take: While the production Volt doesn’t look like the plasma-powered time-traveling car of the future, it’s a fine looking compact car. And did we mention that it goes 40 miles without using any gas at all? No telling what will happen to oil prices between now and November 2010, but we’d bet that they’ll continue to rise, and that the Volt’s detractors will soon get over their disappointment.