The best action cameras to document your ill-advised adventures

Risk your body—but not your smartphone—to capture that stunt. 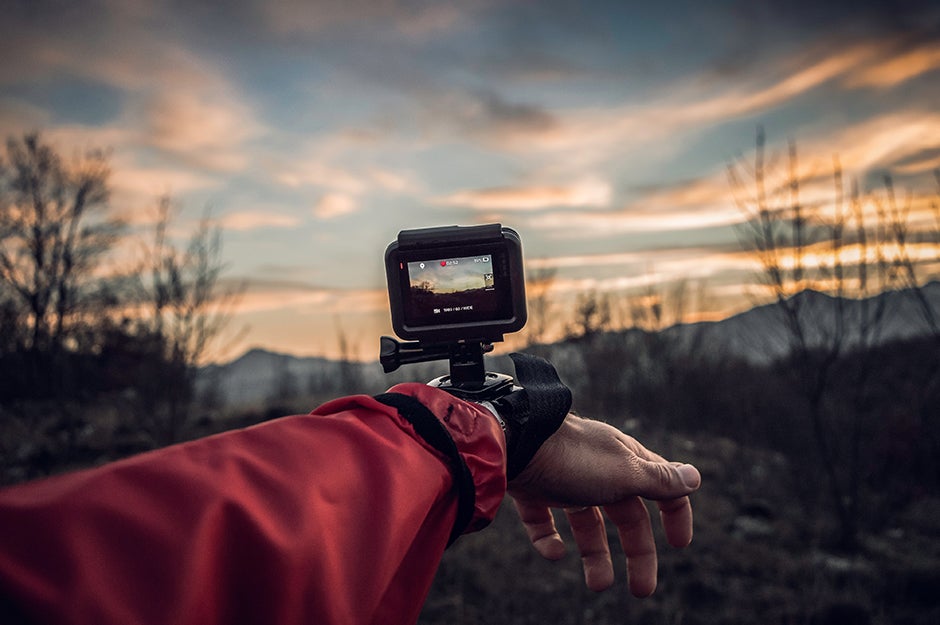 Shoot on the go. Fabrizio Verrecchia via Unsplash
SHARE

Your phone shoots amazing videos, but it can’t go everywhere with you. When you’re flinging yourself down a ski hill at irresponsible speeds or diving to the bottom of a lake to look for lost treasure, it’s best to let your pricy mobile device chill on the sidelines. Action cameras, however, are ready for anything. They’re like that irresponsible friend who’s always willing to accompany you on any bad decision, especially if it will make for some truly excellent internet video. These action cameras can capture your triumphs, failures, and even a high-quality vlog about your recovery process when riding a picnic table off of a small cliff into a snow bank doesn’t work out exactly how you thought it would.

This is a robust incarnation of the well-known and highly-regarded GoPro that packs 5K video capture capabilities and a 20-megapixel photo resolution into a portable, mountable package. The rear touch screen offers a wide range of user control including touch-zoom, and the front display allows for easy framing while in use, allowing this model to excel in a wide variety of situations. In addition to these convenient features, the GoPro HERO9 is even able to stream live video to social media at 1080p, and the recording function offers advanced HyperSmooth 3.0 tech to automatically stabilize recorded media.

The boxy GoPro has long been the standard when it comes to grabbing gnar footy (short for “gnarly footage”) and the HD Hero8 is the company’s most advance model so far. The tough outer shell makes the camera waterproof down to 33 feet and shock-resistant without an extra case. It shoots 4K video at a buttery-smooth 60 fps and does full-HD at up to 8x slow motion so you can pinpoint exactly the point at which your femur exploded while reviewing your crash vid. Most importantly, though, it has the best image stabilization around, so even the most jarring jumps and bumps won’t turn your video into a shaky mess.

A square screen on the front of DJI’s first action camera makes this the best option if you actually want to appear in your own videos. Get yourself a selfie stick—the rugged, professional versions typically use the name “pole” instead—and fling yourself into an exciting situation. It’s great for snowboarding or any video where you want to narrate your own hijinx. It’s waterproof down to 33 feet without an external case and can endure temperatures down to 14 degrees F. You get all the technical performance you’d expect out of a high-end camera, including 4K footages and 12-megapixel still images.

There are actually two cameras tucked inside the GoPro Max’s square body. Wide-angle lenses on each side of the camera capture a 360-degree field of view. As a result, you can capture immersive footage viewers can watch by moving their phone to look around a scene or even wearing a full-on VR headset. If you’re not trying to make something totally immersive, you can achieve impressive effects like reality-warping time-lapses and dramatic pan shots. A six-microphone array captures 360-degree audio to go with the visuals to make your viewer really feel the intensity of a sketchy mountain bike line.

If you already use any of Garmin’s excellent fitness tracking devices like heart monitors and cycling computers, the Virb Ultra can pull data from those gadgets and integrate it into your video. The 4K 30 fps footage syncs up with your body’s vital signs so you can tell just how hard your heart was beating when you sent that gnarly line on your skis. The Virb Ultra can also super-impose other crucial data onto your videos, including the G-forces it’s experiencing, which comes in handy when your pal decides it’s time to learn how to drift his Honda Accord in the parking lot of the local strip mall.

You won’t find many bells and whistles inside this basic action camera, but it’s considerably cheaper than its more advanced competition. It’s waterproof down to almost 100 feet thanks to its external case, and it still shoots 4K video at 25 fps. It even has built-in wifi for viewing and transferring video to your smartphone.