High levels of biodiversity in Brazil could be lost to unchecked deforestation. 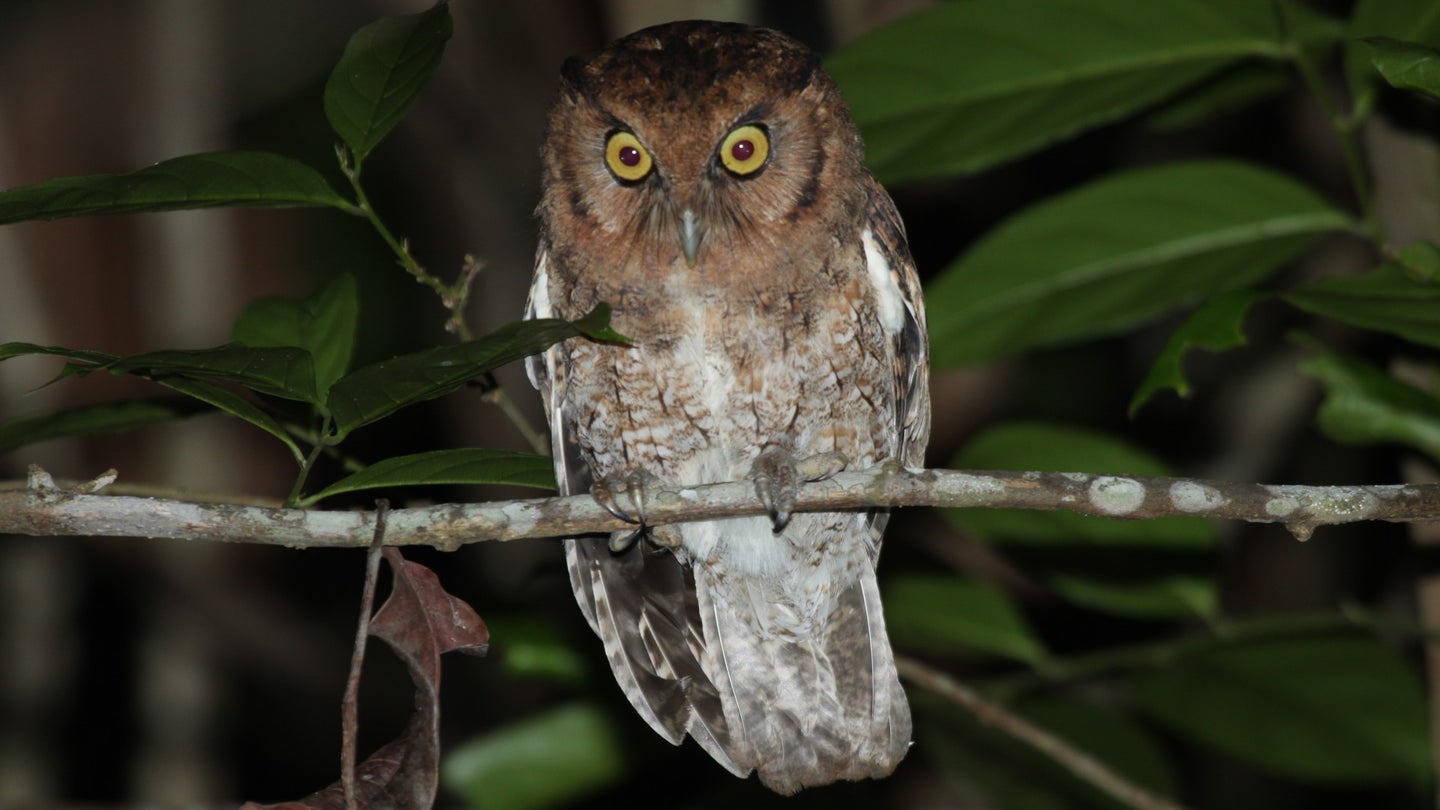 Recent work is shedding new light on the distinctions between what were once considered homogeneous groups of Brazilian screech owls. Just last month, an international team of researchers published a study in the journal Zootaxa differentiating and naming two new species of screech owls, one in the southeastern Amazon rainforest and one in the northern Atlantic forest.

Megascops, the screech owl genus, is the most diverse owl genus on the Western side of the Atlantic. But new species are difficult to distinguish because of similarities in coloring and plumage between owls. Differences in the bodily structures of these birds, called morphologies by biologists, are equally difficult to evaluate.

Because of this, screech owls across the Amazonian and Atlantic rainforests have long been lumped together in the Megascops watsonii–M. atricapilla complex, a group of species so similar in appearance that the boundaries between them are unclear. But two researchers in Brazil, unconvinced and armed with genetic and vocal analysis tools, argue there are actually six species, including two previously unnamed groups, in this complex.

[Related: The Amazon stores tons of carbon. Climate change-fueled wildfires could ruin that.]

Way back in 2006, Sidnei de Melo Dantas and his advisor in zoological studies at the Federal University of Pará, Alexandre Aleixo, began to suspect that there was more variation in the screech owls in the forests of Brazil than had been previously documented. The pair set out to collect data specifically dedicated to parsing out these differences, a project that eventually became the basis for Dantas’ Ph.D, according to Aleixo.

“We needed someone to be really dedicated to this question so it could be answered,” Aleixo says. “Sidnei was really enthusiastic, and it was a project really well suited to him because he’s a field person. He began to collect data in a systematic way for this project.”

Dantas defended his thesis in 2013, and, in 2016, published the first account of the years of fieldwork and analysis he had begun nearly a decade earlier. This first paper outlined the high probability of greater species differentiation within the loosely defined Megascops watsonii–M. atricapilla complex. While there was still plenty of analysis to tackle and publish in detail, other commitments prevented Dantas and Aleixo from digging deep into the samples they had gathered. That is, until the pandemic hit.

The standstill induced by the COVID-19 pandemic gave the researchers the time to take a long, close look at the analysis they had conducted on the samples they had spent years collecting.

“What we accomplished over this past year, during the pandemic year, was because we had the time to really go deep into the data,” says Aleixo, who is now a curator at the Finnish Museum of Natural History in Helsinki, Finland. “It was easier to tell this story and really convince people that we were dealing with not only one, but six different species of screech owls.”

In order to circumvent the challenges of similar outward appearance, the recent Zootaxa study made use of extensive genetic analysis and the owls’ distinctive screeches to distinguish six species spread across Brazil and the surrounding areas.

The researchers obtained DNA samples from 49 screech owl specimens, a combination of museum specimens from several countries, including Brazil and the United States, and new specimens collected during the fieldwork conducted by Dantas and his colleagues.

Over the course of many months, the researchers sought out new owl specimens in Brazil, heading out at night and using pre-recorded screeches to call out the owls and prompt them to defend their territory. Once the owls got close enough, the researchers shot them down, with permission from the Brazilian government, to collect and preserve the necessary tissue samples.

After collecting all the necessary skin and muscle tissues from the rainforests, genetic analysis was carried out at the Field Museum in Chicago. The researchers homed in on three mitochondrial genes and three nuclear genes, which code for distinct functional structures in the cells of the owl. If these codes become too dissimilar between two populations of owls, it no longer makes sense to mate, so the populations diverge and two distinct species evolve over time.

To complement the genetic analysis, the study authors compiled and compared vocal recordings of the owls’ distinctive screeches. In total, 83 recordings from 65 individual owls were analyzed for vocal variation. These recordings were taken from previous studies, open-source archives, and the authors’ own field work.

John Bates, an experienced ornithologist at the Field Museum and one of the study’s authors, says vocal sampling is key for studying nocturnal birds whose morphology is trickier to map. “You can’t see them as well, but you can hear them,” he says. “Vocalizations have started playing a more important role in birds in terms of looking at these differences across geography.”

Dantas, Aleixo, and colleagues mapped the number of notes per second for each sample, and the pitch variation and vocal pacing in each clip. They found that the closer two potentially distinct populations were to one another geographically, the less similar their vocalizations, providing support for their differentiation as species.

According to Aleixo, the evolutionary divergence of vocal patterns provides an external wedge, reflecting the internal genetic divergence, that makes it disadvantageous for individuals from these two populations to produce offspring together. If the groups can’t communicate, then they can’t mate.

“Their gene pools are so different from each other, that it’s no longer advantageous for them to mix,” Aleixo says. “Evolution creates mechanisms whereby they avoid each other.”

In the end, the researchers outlined six distinct species of screech owls, combining analysis of genetic mutations and vocal variations to make the case for each distinct group. “This study is really neat, because it shows very clearly how when you get sampling from across Amazonia, what looks like one species of owl with some maybe some minor patterns of geographic variation across Amazonia turns out to be multiple genetically distinct units, which also happen to sing differently,” Bates says.

Within this group of six, two previously unnamed species were identified by the authors. The first of the new species was named Megascops stangiae, with the common name Xingu screech owl, in honor of Sister Dorothy Mae Stang. Stang was a Catholic nun who worked to protect poor farmers and the environment from deforestation efforts in Brazilian Amazonia. She was an active community leader beginning in the 1960s until she was murdered by ranchers in 2005. The common name refers to the region in which this owl is found, between the Tapajós and Xingu rivers in southeastern Amazonia, where Stang was active.

The second of the new species was named Megascops alagoensis, the Alagoas screech owl, after the Brazilian state of Alagoas, where its song was recorded for the first time in 2001 by another researcher. This species is found in the northern region of the Atlantic forest on Brazil’s easternmost coast.

In addition to the brand-new names, a third species’ name is little used, but clearly defined by the study authors: the Belém screech owl (Megascops ater), first distinguished in 1982. This group is found just to the northeast of the new Xingu screech owl, closer to the coast. Although this species’ distinctive qualities were well-documented nearly four decades ago, it has continued to be lumped into the complex this study is hoping to break apart.

While the recognition of two new species is important, so too is the clear recognition of six species where there once were two. Where it was once believed there were only a few, broadly distributed screech owls in Amazonia and the surrounding areas, studies like this one show rapidly increasing diversity of species and narrowing of their distributions.

In fact, the two new species detailed by Dantas and his collaborators are already considered endangered, and the other four could be well on their way to endangerment, too. The Xingu screech owl is endemic to the areas most severely burned by the 2019 Amazon fires. Habitat fragmentation by human activity has critically endangered the Alagoas screech owl in the very small area of the Atlantic forest it occupies.

[Related: The Amazon rainforest is burning, and humans are to blame]

With this in mind, Bates says simply protecting one region of the forest won’t protect other groups in other areas. “What these studies show is that there are these unique populations living in the southeast where the most deforestation has happened, where the forest is most threatened and most fragmented,” he says. “Amazonia is not this single homogenous forest from the perspective of the evolutionary history of these organisms, and that’s something that is really important to appreciate for conservation.”

Dantas hopes that his study is followed by many others documenting the biodiversity in the Amazon and Atlantic forests, before it’s too late. “We need urgently to protect and invest more in science here because we are losing our biodiversity, without knowing it really well.”