No, your eyes do not deceive you: They’re really, really pink. 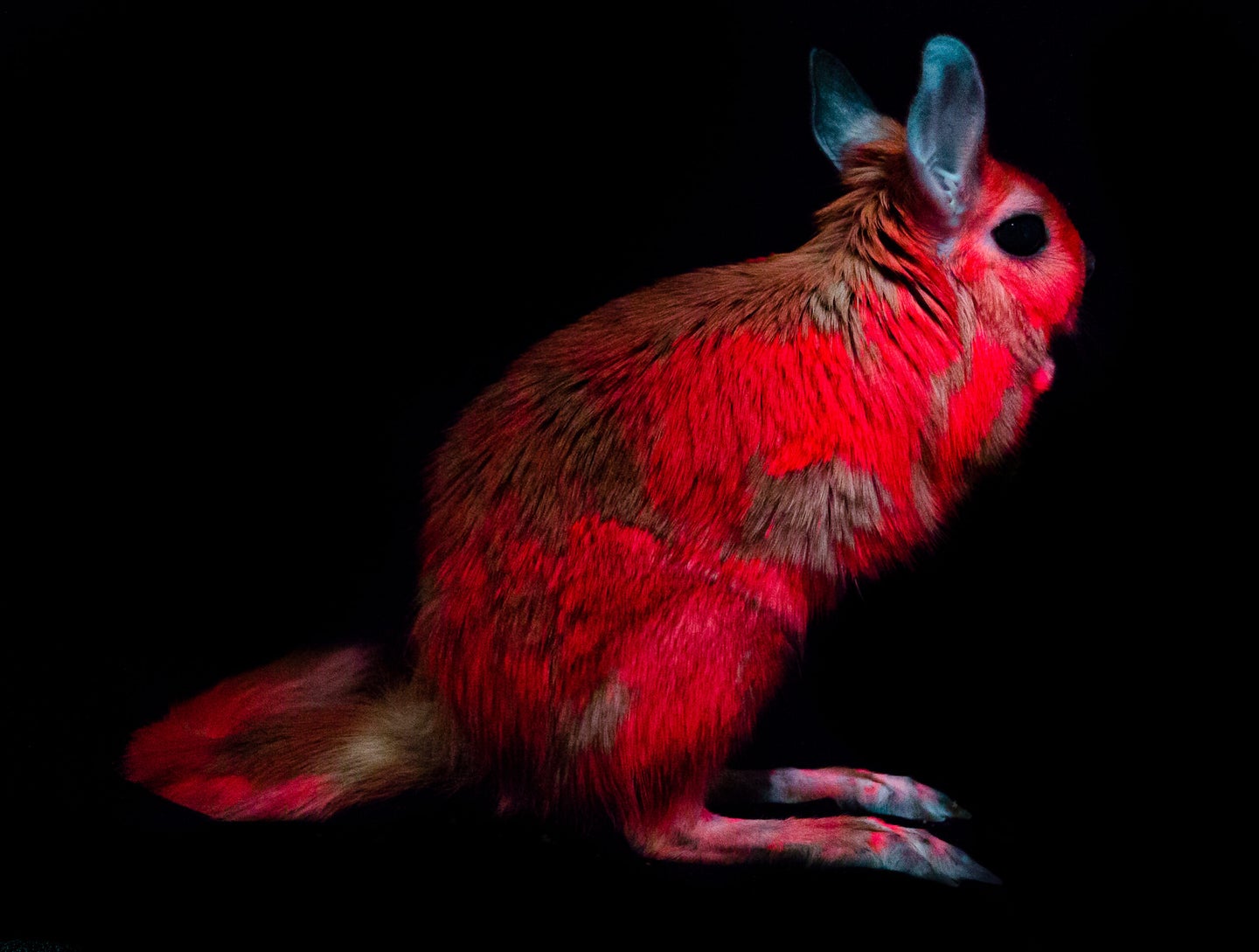 These might look like a glowing bunny, but it's actually a biofluorescent springhare. J. Martin and E. Olson, Northland College; from Olson et al. 2021, Scientific Reports
SHARE

Biofluorescence generally describes the process during which particles in an organism’s tissues absorb short-wavelength, high-energy light, and after keeping some of that energy for itself, shoots the wave back out at a lower energy and thus a longer wavelength. Short wavelengths like UV and blue light go in, then are emitted as longer wavelengths of red, orange, yellow, and green light.

Notably, each of these three groups inhabits a uniquely diverse ecosystem across three different continents, and none of them are closely related. Adding in these two species of springhares suggests that the glowing trait is more widely distributed throughout many species of mammals than previously thought, says Erik R. Olson, a professor of natural resources at Northland College and the lead author. “I have a feeling the springhare won’t be the last of the mammals to surprise us with this trait.”

Olson also contributed to the studies documenting biofluorescence in flying squirrels and platypuses. In fact, his team’s initial observation of the pink glow from the springhares came about in April of 2018 while they were examining preserved specimens of flying squirrels and other gliding mammals at the Field Museum in Chicago. One of these species, the scaly-tailed squirrel, is classified under the same sub-order as springhares.

“So when we were looking through the drawers—in the dark with headlights on—we found the scaly-tailed squirrels, which didn’t exhibit biofluorescence, but, by chance, we looked in the neighboring drawer, which contained their closest living relatives, the springhares,” Olson explains. “We saw this pinkish-orange biofluorescence in the drawers and that was an exciting moment. Seeing something like this, probably for the first time—it really stoked the fires of curiosity.”

To understand the pink glow, Olson and his team launched an extensive characterization of its patterns and chemical basis. They examined 14 museum specimens, which included eight specimens of Pedetes capensis from Angola and Botswana, and six specimens of the Pedetes surdaster found in Kenya and Tanzania.

P. capensis, the South African springhare, and P. surdaster, the East African springhare are very similar in size and physical appearance but are differentiated by genetic differences. Contrary to what their names suggest, they’re not related to hares but are actually rodents.

Springhares resemble kangaroos, with short front legs and powerful back legs, but are about the size of a rabbit. These also have large ears, big eyes, and long, bushy tails that provide balance. Both species are nocturnal and dig burrows, where they hang out during the day.

Olson and colleagues photographed the specimens under both visible and UV wavelengths of light. Under the UV light conditions, the outward-facing back and sides, but not the bellies, of the springhares displayed a red-orange glow.

They also photographed five living P. capensis bred in captivity at the Henry Doorly Zoo and Aquarium in Omaha, Nebraska. Patches of these springhares’ fur fluoresce with a vibrant pink glow under UV light, and each individual displays a unique pattern of vibrant red, orange, and pink.

There’s also photographic evidence of this biofluorescence in springhares outside of captivity. Separate from the Nature study, wildlife photographer Alex Frood documented similar pink fur in a wild springhare in Botswana in April 2019.

In addition to light imaging, Olson and his team used a chemical technique called thin layer chromatography to extract the molecules responsible for the fluorescence from the fur of a deceased female P. capensis at the Mesker Park Zoo & Botanic Garden in Evansville, Indiana. They identified various species of porphyrins, a class of organic molecules famous for their intense pigmentation, that are responsible for the otherworldly glow.

Porphyrin molecules are often responsible for fluorescence and the display of intense pigments in many proteins and tissues. Because of their ring structure, porphyrins readily absorb light, which excites the electrons in its energy-rich double bonds and release it again as bright colors as the electrons calm down again.

According to Michaela Carlson, assistant professor of chemistry at Northland College and one of the study’s co-authors, two porphyrins in particular are likely responsible for the color of the biofluorescent springhares. “Both coproporphyrin and uroporphyrin fluoresce in the yellow, orange or red regions of the visible spectrum depending on the conditions,” she says. “This is why springhares fluorescence pink.”

The thorough framework established by Olson and his colleagues in this study could be used to broaden the investigation into fluorescence in other mammals. Olson suspects that this fluorescence is more widespread in mammals that previously thought, but notes we’ll only know if other scientists investigate.

“I think this collaborative work lays down a good approach for documenting biofluorescence in mammals,” he says. “The hard work of documenting this trait more broadly across Mammalia is now at hand.”