Stephen Hawking says we have 100 years to colonize a new planet—or die. Could we do it?

Here's what it would take to survive this particular doomsday prophecy 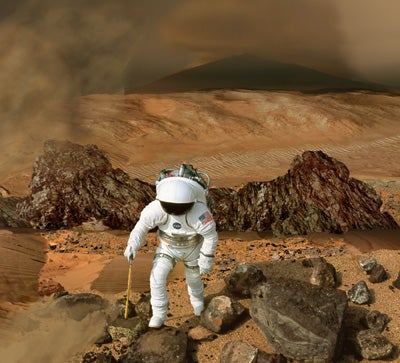 Stephen Hawking is making apocalyptic predictions again. The respected theoretical physicist warns that humanity needs to become a multi-planetary species within the next century if we don’t want to go extinct. Last year, he prophesied that we had maybe 1,000 years left on Earth, and the inspiration for this newly-urgent timeline is unclear—except for the fact that Hawking’s new documentary about colonizing Mars is coming out soon.

To be sure, Earth is facing some big problems, including climate change, overpopulation, epidemics, and asteroid strikes. But before we flee this planet like an action hero jumping out of an explosion, let’s think about this for a second. Sure, it’d be great to have a backup civilization somewhere in case asteroids wipe out all life on Earth. And it would be one of the most exciting things humankind has ever done. But what would it actually require?

Finding a second home for humanity

Mars is a somewhat obvious choice because it’s nearby, but it’s not exactly Earth 2.0. In fact, it’s arguably a lot worse off than Earth. It has toxic soil, it’s freezing cold, and the air is unbreathable. Any Martian colony would likely rely on regular care packages from home, which would not work well if Earth was done-zo.

If we really want to find the perfect home away from home, we could look to other star systems: with billions of planets in the Milky Way, there’s a good chance some will have water, land, and breathable air. But so far we haven’t found Earth’s twin, and our telescopes don’t have the kind of resolution that could tell us in detail what an exoplanet is like. Also, it would take hundreds of years to get there, and if those passengers don’t die along the way, they’d likely evolve into a new species before they even got to their new planet.

We would need to send significant numbers of people to other worlds in order to ensure the survival of the human species. Small colonies are subject to genetic anomalies from inbreeding, and vulnerable to getting wiped out in accidents.

NASA’s missions to Mars will likely only carry as many as six people at a time to the red planet. SpaceX wants to develop an Interplanetary Transport System to deliver 100 Martian settlers at a time, but at the moment it is nothing more than an imaginary behemoth.

The interstellar route is even more challenging, because we don’t even have an imaginary spacecraft capable of supporting thousands of people for hundreds of years on an interstellar journey.

And in either case, there’s always the politically charged question of: who goes and who stays? Do poor and disadvantaged people get left behind on a hellish world?

Making ourselves at home

If we really want to thrive on another planet, we’ll probably have to adapt the environment to suit our needs. Sure, we might be able to terraform Mars, but it would take about 100,000 years for its atmosphere to become breathable. Hope you’re not in a rush to go outdoors without a gas mask anytime soon.

NASA’s Journey to Mars is expected to cost up to $1.5 trillion. And that’s just for the first crews. Later on, launches bringing settlers and supplies to the colony would probably still cost hundreds of millions of dollars each.

And SpaceX’s plan to build the Interplanetary Transport System sounds great, but CEO Elon Musk has been very open about saying the company has no idea how it would pay for such a vessel.

And exactly who would pay to colonize Mars? Why would the U.S. government spend all that money to sustain a colony? What would we get out of it, besides better chances for the survival of our species? Will the Martian colony produce valuable exports, besides the (obviously awesome) scientific discoveries that would come out of it?

Surely there are a few wealthy Earthlings willing to pay millions of dollars each for a ride to and a habitat on an alien world, but the majority of folks who want to go to the red planet hope to come home afterwards.

Solving the problems that are killing Earth

History has a tendency to repeat itself. Even if we do successfully colonize another planet, we’ll still have to solve all the problems that Earth currently faces. Our technologies are just as likely to destroy the environment on other planets, and epidemics and asteroids could wipe out a Martian settlement much easier than they could obliterate the entire population of Earth.