Splashdrone Is A Waterproof Alternative To Screaming About A Drowned Quadcopter

If winter ever lets up, you can bring it to the beach 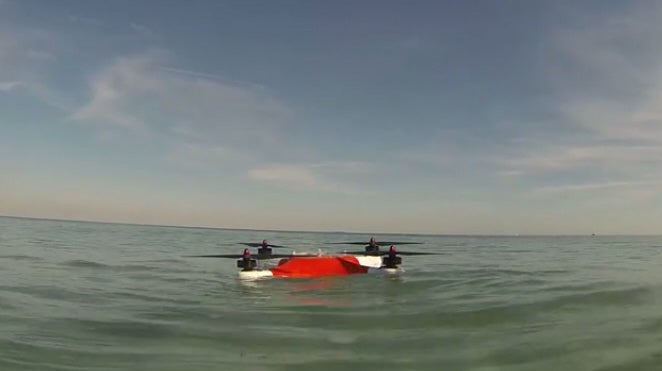 Electronics and water usually don’t mix. For many drones, falling into a pond or lake might spell certain doom, prompting their owners to take drastic measures such as diving into a canal to save a machine. But Splashdrone, which is currently raising money on Kickstarter, is made to be waterproof.

Boasting a 17-minute flight time and a top speed of 25mph, Splashdrone is a quadcopter with a watertight gasket and an injection-molded waterproof frame. Piloted by either remote control or smartphone app, it can carry a waterproof camera below its belly and film dramatic continuous shots from under the water and into the sky–like a Wes Anderson film, if he spent his time listening to Dick Dale and filming surfer videos.

And should your three-hour tour go unexpectedly long, Splashdrone has an adapter for an emergency flare. With this it can hopefully attract help before people start fighting over a conch or using glasses to start fires. The project has already raised over $10,000 of its $17,500 goal, and if crowdfunding is successful, they plan to begin shipments in June. Assuming summer ever happens this year, expect to see a few Splashdrones out on the beach.