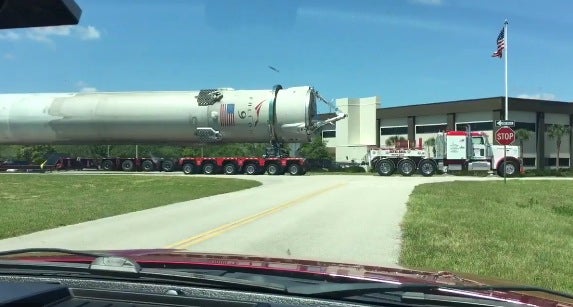 Question: How long of a trailer does it take to transport a SpaceX rocket booster?

Don’t ask us how that thing turns.

We counted 26 axles on the truck and trailer (though not all the wheels were in use). The 15-story rocket booster on top of it landed on a drone ship on April 8, and after about a week and a half of getting it off the ship and ready for transport, SpaceX is finally bringing it home.

The Falcon 9 is on its way back to Kennedy Space Center, where SpaceX CEO Elon Musk hopes to test fire it about 10 times to see if it can safely be flown again. If it’s still in good condition, the booster could launch again as early as May or June. That would make it the first rocket SpaceX has ever landed and reused. Eventually, the hope is that these reusable rockets will dramatically lower the cost of launching stuff into orbit.