SpaceX Has Successfully Landed Its Rocket On A Drone Ship

Fifth time’s the charm: SpaceX has successfully landed the first stage of its Falcon 9 rocket on its drone ship out in the Atlantic Ocean, the first time in history such a landing has ever been achieved.

All four previous instances of this landing ended in failure. SpaceX hopes to use this type of rocket landing to be able to re-use the first stage of its rockets and dramatically cut the cost of space travel going forward. 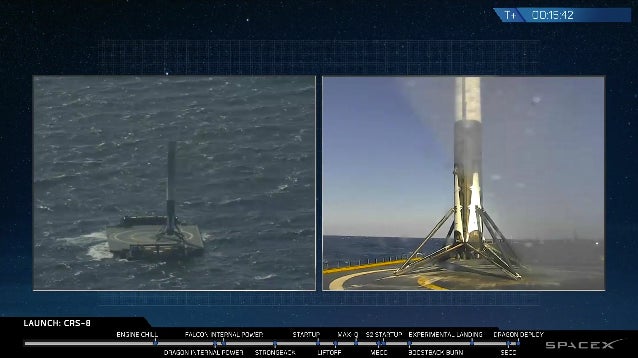 This landing is a huge step towards that goal, and came during an especially pivotal launch for SpaceX: SpaceX’s first cargo re-supply mission to the International Space Station since a Falcon 9 exploded in mid-flight in the summer of 2015, thwarting that particular re-supply attempt.

On this mission, SpaceX’s uncrewed Dragon capsule — which sits atop the Falcon 9 rocket and detaches to fly onward to the space station — was also carrying some really exciting cargo: the first-ever inflatable space habitat designed for the space station, the Bigelow Expandable Activity Module (BEAM). Once the Dragon reaches the station, the balloon-like BEAM will be removed by a robotic arm, reattached to another part of the station, inflated, and eventually, entered by astronauts.

There’s still a lot of things that need to happen for the mission to be a full success. This is rocket science, after all. But given the successful Falcon 9 launch clearing Earth’s atmosphere and the picture-perfect rocket landing on the drone ship, this launch is already one for the history books.