Like Spider-Man, if he was fireproof. Which he isn't. 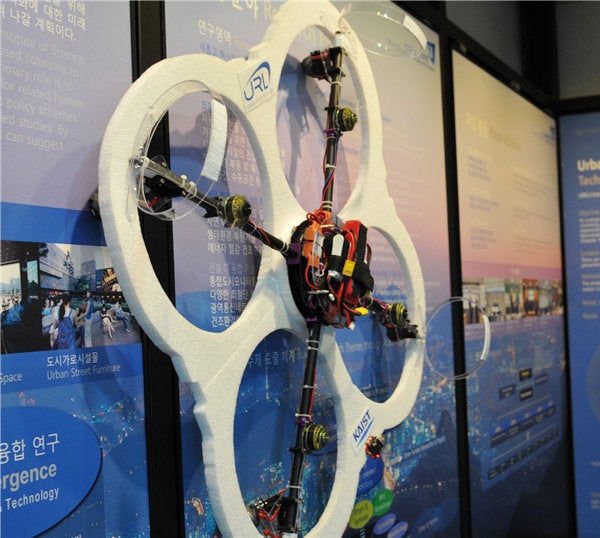 South Korea’s robots are future-proof. Or, well, fire-proof, but as rescue robots, that’s definitely part of their future. A rescue drone by the Korean Advanced Institute Of Science and Technology is a flying wall-climbing fireproof building inspection machine. It’s Spider-Man, essentially, with more batteries and fewer hangups about Mary Jane.

Named CAROS, for Climbing Aerial RObot System, looks like a normal quadcopter. It flies to and fro like a quadcopter, then turns perpendicular to the ground and attaches itself to surfaces it needs to inspect. If it falls, it can catch itself and either fly back into place or land somewhere safely. It has an autonomous navigation system that takes information from its sensors and lets it map 3D environments, like building walls or the inside of rooms.

Building inspection is useful, but it’s not the most exciting thing a drone can do. Fortunately for our short attention spans that crave excitement, CAROS is also going to be a fireproof rescue worker. From KAIST:

We’ve seen this fireproof variant before, and I at least will never tire of watching drones emerge from flames unscathed. For people trapped in burning buildings, the aesthetic appeal of a cool drone is way less important than the rescue it heralds, which it will do. Because it can climb walls, fly, and survive fire.

Watch a video about the fireproof drone below: