Soon, You’ll Officially Be Able To Name An Exoplanet… Sort Of

You can't come up with the names, but you can choose from several IAU-approved titles 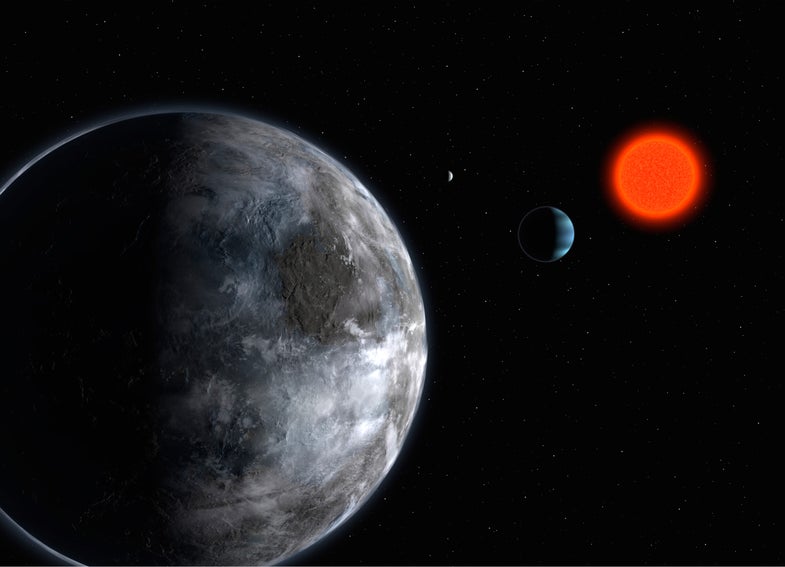 Artist's impression of the planetary system around the red dwarf Gliese 581. Using the instrument HARPS on the ESO 3.6-m telescope, astronomers have uncovered 3 planets, all of relative low-mass: 5, 8 and 15 Earth masses. The five Earth-mass planet (seen in foreground - Gliese 581 c) makes a full orbit around the star in 13 days, the other two in 5 (the blue, Neptunian-like planet - Gliese 581 b) and 84 days (the most remote one, Gliese 581 d).
SHARE

The International Astronomical Union—the organization that names planetary bodies—has just launched the first phase of its contest to let non-astronomers name planets in other solar systems. Beginning today, astronomical organizations will choose from a list of 305 exoplanets, deciding which 20 or 30 will get pronounceable names. Then, in February, those same organizations will get to nominate names for those exoplanets (since there are certain conventions the names have to follow). Finally, the rest of us will be able to vote for the best names in June.

Though companies like Uwingu have been raising money by hosting contests to name exoplanets, the IAU has pointed out that those naming rights are meaningless since they wouldn’t be recognized by the rest of the astronomical community. Popular Science has argued that the IAU should embrace the public’s desire to be involved in naming exoplanets, so this contest is a step in the right direction.

It’s somewhat unfortunate that the public can’t be involved in the first few stages of the selection process, but that decision is probably the result of a fumble in 2013. While hosting an IAU-sanctioned contest to name two of Pluto’s moons, the SETI Institute allowed the general public to suggest names. William Shatner nominated ‘Vulcan’, which won the overwhelming majority of votes. But much to the dismay of Star Trek fans, the IAU threw the name out since the name doesn’t have anything to do with the Greek or Roman underworld, which is the theme for Plutonian moons.

So if, like me, you’re sad that you can’t nominate a name for an exoplanet, just remember that it’s William Shatner’s fault.

*Just kidding, we love you, Captain.