This Smart Parachute Wants To Save Your Drone From Disaster 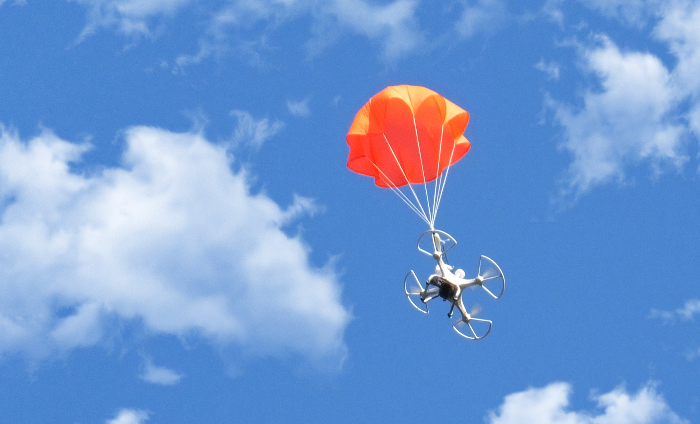 The worst part of having a drone is losing it. Pilots will go to great lengths to make sure their drones stay clear of harm, whether it’s diving into a canal to save it from drowning or turning a mishap on national television into a learning experience and warning for others. SmartChutes is a crowdfunding campaign Kickstarter right now that envisions a better way: parachutes for drones that deploy automatically when the drone is in peril.

Michael Pick, creator of SmartChutes, notes in his campaign video that the first time he flew a quadcopter, he felt uneasy about sending so much expensive equipment into the air. So he came up with an emergency system for drones: a 36-inch parachute in a 4.25-inch long by 1.5-inch diameter canister and a sensor that weigh 4 ounces combined. The system can attach to quadcopters that are up to four pounds. The sensor takes 15 seconds to prime, and operates off its own battery. An accelerometer and a gyroscope can detect flips, freefalls, or a tilt over 90 degrees. When these potentially disastrous maneuvers are detected, the sensor signals the canister to release the parachute.

According to Pick, detection and release of the parachute takes only 350 milliseconds, but the parachute itself takes time to fully deploy and start slowing the fall. Because of this, it works for flights above 160 feet, but below that the drone will likely hit the ground before the parachute can stop it.

Early bird prices for a parachute system are still available at $130, with an expected retail price of $160, should the campaign reach its goal. SmartChute is slightly over a fifth of the way to its $25,000 goal, with only six days left in the campaign.