Smart Mouthguard Tells Your Dentist If You’re Grinding Your Teeth

And could be used with athletes to detect concussions early 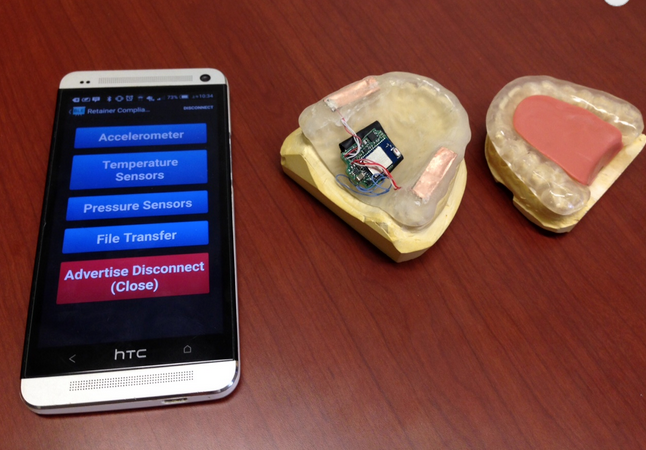 If you’ve ever woken up with a weird headache and pain in your jaw during a particularly stressful time, it might be because you were grinding your teeth, a condition called bruxism. Don’t worry, though, you’re not alone—one in five Americans does it. Now a team of researchers from the University of Florida has created an easier way to diagnose bruxism using a smart mouthguard.

Stress is a problem for more than half of working adults, according to the American Psychological Association. Among the many physiological issues that stress can cause, bruxism may seem relatively minor. But teeth grinding can have much larger effects, such as damaged teeth, headaches, insomnia, and a sore jaw. And despite its prevalence, bruxism is not easy to diagnose. The most common way to do so is to have the patient monitored overnight in a sleep clinic, which is “intrusive,” as the researchers say, and impractical.

The researchers thought that a smart mouthguard would be less expensive and make diagnosis easier for dentists. Equipped with sensors, the mouthguard detects how much force is being applied on it by the teeth as well as which teeth are doing the grinding. The information can then be sent to a dentist via a mobile device.

The mouthguard can also help treat bruxism in addition to diagnosing it. Usually, bruxism is treated with therapy in order to help the patient reduce stress and change behaviors. But the smart mouth guard can do more: “The advantage is that the guard extends the treatment beyond the time spent in the clinic,” said Fong Wong, one of the researchers behind the project. “This promises greater effectiveness and lower cost,” because it cuts down on the number of clinical sessions a patient needs, she says.

In the future, similar smart mouthguards could be useful for athletes involved in contact sports like football. Accelerometers could detect the strength of forces affecting the head, which could give them advanced warning if a concussion is likely. Other types of sensors could help determine if the athlete is dehydrated or is approaching a dangerously high body temperature.

The mouthguard recently came in second place in a competition held for applications for microtechnologies in Anchorage, Alaska. The researchers haven’t yet given any indication of when the mouthguards could go on the market, or how much they would cost if they do.