What scientists learn about animal cognition helps unravel the mysteries of intelligence. 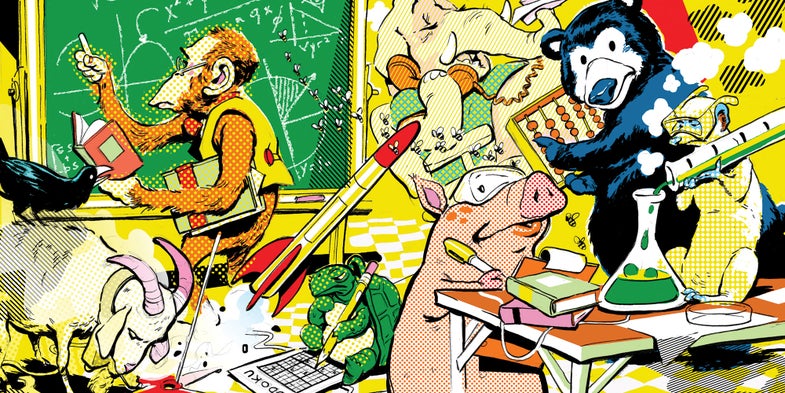 You think you’re so smart. Well, a wave of research into animal cognition reveals that just about anything you do, other creatures can do too. Sometimes, they can do it far better. To probe the nature of intelligence, scientists test animal skills and compare how different species think. A chimpanzee and a crow both understand cause and effect, but one’s got a big wrinkly brain like a human, and the other possesses a smooth ball of cells that could fit into a tablespoon. Examining how two critters with radically different wiring solve the same problem might illuminate brain science’s murkiest mystery: how a glob of neurons generates smarts. The timing couldn’t be better. With AI poised to enter everyday life, we are anxious about what will happen when we’re outflanked by machines. Animal-cognition research suggests that maybe we shouldn’t be too worried: It turns out we’ve been sharing the planet with superior alien intelligence all along.

Bird brains are so tiny and seemingly simple that people long assumed the creatures were stupid. (That some fly directly into windows might have something to do with it.) But Nicky Clayton, professor of comparative cognition at the University of Cambridge, has uncovered hidden powers in the minds of corvids, the avian family of crows, jays, and ravens. In one study, she pitted corvids against kids in a puzzle ­requiring cause-and-effect reasoning: A treat or toy floats on water in a tall narrow tube, below where beaks or small fingers can reach. A jay quickly realizes that dropping pebbles into the tube raises the water level and floats the food into reach. But children ­younger than 8 have a hard time ­figuring that out, if at all.

The point isn’t that a jay or crow is like an 8-year-old. “It’s not,” Clayton says. “A crow doesn’t go to school; it doesn’t have hands; it doesn’t speak.” It’s that somehow this bird brain, separated from us by 300 million years of evolution, makes the same computations we do. Our two species’ brains are like Mac and PC: different architecture, similar functions. Figuring out how such different programming can arrive at the same results will reveal what’s common to both of us. And it could reveal something about the nature of intelligence itself.

They are not simply lesser versions of us. Although chimps struggle to learn language, they have a talent for spatial reasoning. A pioneering 2007 study administered 16 cognitive tests to hundreds of chimps, orangutans, and toddlers, challenging abilities such as understanding how objects move in space, comprehending cause and effect, and communicating cooperatively. Kids trounced the primates in cooperative communication drills, such as pointing at something to draw attention to it. But chimps were better with tools and crushed spatial-relations tests. “They understand the physical properties of the world in a flexible way,” says Evan MacLean, director of the Arizona Canine Cognition Center at the University of Arizona, who also studies primate cognition. Another study showed chimps could memorize where numbers popped up on a screen faster than humans, suggesting they can comprehend space in ways we cannot.

The secret expertise of bees

Knowledgeable ­people typically judge their ­abilities accurately, but the incompetent routinely overestimate their skill. This all-too-familiar glitch in our mental makeup is called the Dunning-Kruger effect. It’s a failure of metacognition: the ability to gauge what you know and what you don’t.

Research suggests bees do not have this flaw. In a recent experiment led by Andrew Barron, associate professor in biological sciences at Macquarie University in Australia, researchers trained honeybees to determine which of two horizontal lines was above or below the other. Correct answers triggered a sugar-syrup reward. Mistakes drew a bitter fluid. Barron next placed the lines side by side, making a correct answer impossible. In response, many bees flew away. Shrewdly, they knew they didn’t know enough to get a treat.

The mystery is how they do things like this with so little to work with, Barron says. A bee can quickly memorize the locations of the best flowers and the fastest flight paths to reach them, but it has only 1 million neurons. To understand that minimalist brain, Barron’s group is building bee-brain models, one of which will soon be uploaded into what he calls a “very sweet” little quadcopter drone ­under development at the ­University of Sheffield.

The idea is to test how well their virtual brain works. Says Barron: “We’re modeling a bee brain, so we might as well make it fly.”

Octopuses and cuttlefish distribute their brain cells throughout their squishy bodies; their arms contain up to three-fifths of their neurons and can carry out some actions on their own. If you disarm an octopus by cutting off some tentacles (please don’t), the disembodied limbs will continue to move for an hour or so. They apparently recognize themselves: They won’t grab each other the way they’d grip a piece of fish. An octopus also uses its brain-body to change its skin color and pattern, and shape-shift to look exactly like a patch of seaweed or some sand-speckled rocks. ­Research on these sensitive, short-lived creatures is skimpy, but this ­ability seems to be partly under ­conscious control: A hunting cuttlefish deploys a pulsating pattern to confuse prey, and a male can impersonate a female to avoid sexual competition. These inquisitive and extremely bendy beasts are more closely related to clams than to birds or monkeys, but they can do puzzles, problem-solve, think flexibly, and even play—­suggesting that as smart as we are, we’re still mostly clueless about the animal geniuses among us.

Pigeons can’t seem to find their way out of a Home Depot, but when it comes to multitasking, they are superhuman. Neuroscientist Sara Letzner of the Ruhr University Bochum, in Germany, pit man against bird in a maddening test last year: Study subjects performed a repetitive typing (or pecking) task that was randomly interrupted with a signal to stop and start doing something else, either immediately or after 300 milliseconds. When the test had no delay, people and pigeons were on par. But with the built-in pause, pigeons were 200 milliseconds faster than humans. “Honestly, it was unexpected,” Letzner says. Her group theorizes that neural signals travel such short distances between the densely packed cells in the birds’ itty-bitty skulls that instructions arrive more quickly.

Chaser, the famous border collie, has learned more than 1,000 words and even some basic grammar, such as the difference between taking a ball to a Frisbee, and taking a Frisbee to a ball.

Is she a very, very good dog? Undoubtedly. But all ­canines have ­exceptional gifts for human social communication, which is the launching point for language.

Recently, University of Arizona researcher Evan MacLean put 552 dogs through tests like the ones in the 2007 study of primates and toddlers. Dogs can’t keep track of hidden objects as well as primates can. But they ace social tests such as looking to see where a human is looking, or following, pointing, or cooperating. On these measures, “dogs seem to be more humanlike than nonhuman apes,” MacLean says—and might turn out to be better experimental models for scientists trying to understand our social nature.

But how did dogs become more like us in some ways than apes are? Domestication likely bred in these super-social abilities, MacLean says—although it’s notable that closely related wolves also cooperate to hunt and raise their young.

Robins know how to treat a mate

As divorce attorneys know, people aren’t good at figuring out how to make each other happy. But it’s a snap for a New Zealand robin. Like you, these birds appreciate variety. After a few wax-moth grubs, for example, a robin gets a hankering for mealworms. (Who wouldn’t?) And, like you, they sometimes offer their love interest a treat to eat.

Unlike you, the birds get it right. In 2017, Cambridge ­University professor Nicky ­Clayton found that when a female ate a few waxworms or mealworms, her partner ­anticipated what she’d want next. He would do this even when he couldn’t see her eating. It seems he could read her ­behavior to guess what she wanted. Whether the birds can also write marital advice ­columns is not currently a ­subject of research.

Low-status meerkats puzzle out how to open a container for a delicious scorpion, while their social superiors are lazier.

Guppies that have large brains can learn the difference between two and four, unlike small-brain brethren.

Elephants use their trunks like leaf blowers, blasting jets of air to push leaves or hay into easy reach.

Red-footed tortoises remember for more than a year which of two colors signal mango jelly. (Their favorite!)

Black bears can recognize real-world objects like a shovel or football from images in photographs.