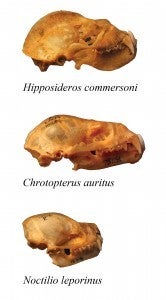 Certain bat species have skull adaptations that let them crunch down on small vertebrates.

Most bats dine on insects, plants, or blood, but a handful of species are more ambitious. Scientists compared the skulls of 35 species of these carnivorous bats to those of insect-eaters, and reported their findings last week in Proceedings of the Royal Society B.

It turns out that carnivorous bat species have all evolved a similar strategy to crush their bony meals, which can include reptiles, amphibians, birds or other, unluckier bats. Meat-eating bats tend to be larger than other kinds of bats, and have longer snouts to fit their larger prey. In general, their skulls are shaped to allow them to bite down with plenty of force while opening their jaws wide.

Two species did stand out a bit from their carnivorous fellows. Their snouts were not as long but were broad, letting them snap down on wriggling fish.