Three of them may be habitable 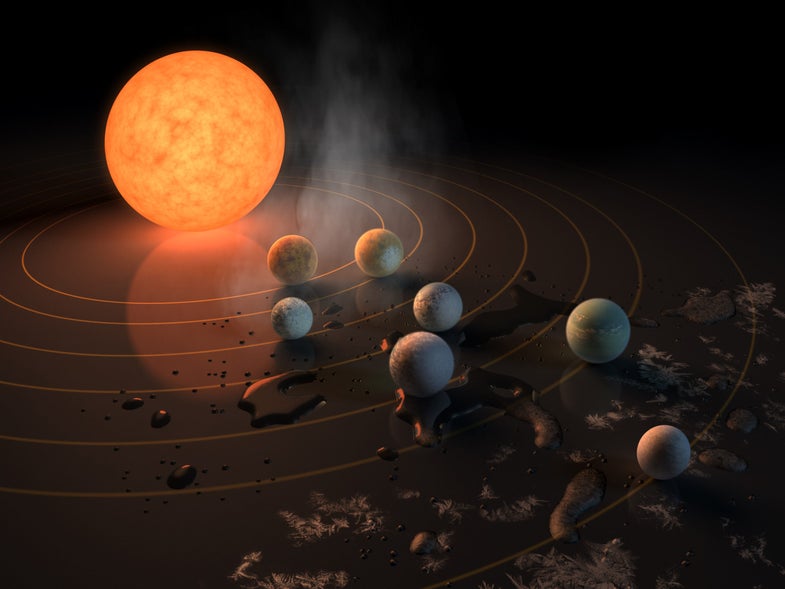 Seven Earth-size exoplanets orbit the star TRAPPIST-1. Three orbit very close to the star and may be too hot to sustain liquid water on the surface; one may be too cold. But the three planets in the middle may be juuuust right. NASA/JPL-Caltech
SHARE

Planet-hunters are always on the lookout for worlds that look like Earth—rocky planets that are not too hot and not too cold for liquid water to flow on the surface. Now scientists have hit the jackpot, discovering seven Earth-size exoplanets orbiting a single star just 39 light-years away.

The star, named TRAPPIST-1, was thought to be home to three exoplanets. But with the help of a variety of observatories—including the Transiting Planets and Planetesimals Small Telescope (a.k.a. TRAPPIST, the star’s namesake), the Very Large Telescope in Chile, and NASA’s Spitzer Space Telescope—researchers found four more planets in the system. The planets were discovered as they passed in front of the star, blocking some of its light from Earth’s point-of-view.

“It’s the first time we’ve found so many Earth-sized planets in a single system,” says Emmanual Jehin, a co-author on the study, which was published today in Nature.

Five of TRAPPIST-1’s planets are quite similar in size to Earth, while the other two are a bit smaller than our own world. Their densities suggest that six of the exoplanets are made of rock; the seventh and most distant may be an ice world.

The three exoplanets closest to the star are thought to be too hot to harbor much surface water, and the seventh may be too cold. However, temperatures may be just right on the fourth, fifth, and sixth planets; if they have Earth-like atmospheres, they could host oceans, lakes, and rivers. And where there’s water, there’s a possibility of life as we know it.

Life around a red dwarf?

Six of the planets orbit pretty close to their star, so their “years” last two weeks or less. It works out, though, because TRAPPIST-1 is a small, dim star called a red dwarf, so the planets aren’t as scorched as they would be in our own solar system.

“It’s a very small, very compact system,” says Jehin. “The seven planets are all included well inside the orbit of Mercury.”

Gravity could be doing weird things to the planets in this mini solar system. Because they’re squeezed in so close, each planet gravitationally tugs on its neighbors, potentially distorting its core and generating heat—this process, called tidal heating, is how ice worlds like Europa and Enceladus developed liquid inner oceans.

But tidal locking could be a problem in TRAPPIST-1. Like Earth’s moon, these planets likely always present the same face toward their star, resulting in a hot side and a cold side. That could potentially make the planets less welcoming to life.

Another potential problem is that astrophysicists suspect that young red dwarf stars are tumultuous, frequently spewing stellar material into space. Those solar flares could irradiate nearby exoplanets—burning off their atmospheres, eliminating the water supply, and destroying life’s chances.

Jehin, however, says more research is needed into red dwarf behavior. The team thinks the planets may have formed further from the star, then migrated closer, which may have kept them safe from any rebellious activity from when the star was young.

Plus, says Jehin, “this star is extremely quiet compared to other very small stars. It’s very calm compared to Proxima Centauri, for example…If we’re optimistic, at least five of the planets—maybe not the first and maybe not the last—but at least five could have some liquid water on the surface, if they have atmospheres and the right pressures.”

Even if the TRAPPIST-1 planets turn out to be nothing but dry, airless rocks incapable of supporting life, today’s findings bode well for the search for other Earthlike exoplanets.

Approximately 85 percent of the stars in our galaxy are red dwarf stars. So if they’re anything like TRAPPIST-1, that could add up to a whole lot of Earth-size exoplanets.

Plus, notes astronomer Ignas Snellen in an independent commentary in Nature, for every transiting exoplanet our telescopes have detected, there may be 20 to 100 times more that don’t orbit their stars on a pathway that comes between Earth and the star.

In other words, there could be tons more planets out there that we can’t see with our most common planet-hunting equipment.

Slated for launch in 2018, NASA’s Transiting Exoplanet Survey Satellite should help track down some more of these hidden worlds. It will study 200,000 of the brightest stars in the sky, looking for the telltale shadows that indicate an exoplanet is crossing in front of its star.

And we may soon be able to learn more about the TRAPPIST-1 planets themselves. After the James Webb Space Telescope launches in late 2018, it may be possible to analyze the exoplanets’ atmospheres and climates, indicating whether they might be home to living organisms—or at least the necessary ingredients of life as we know it.