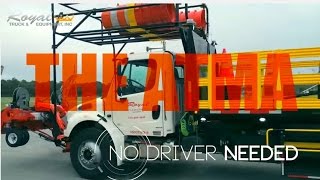 Self-driving trucks from Pennsylvania firm Royal Truck and Equipment will be on Florida roads by the end of the year.

The rigs, which are part of a Department of Transportation pilot program, can navigate by following a pre-programmed lead car, via remote control, or by using GPS Waypoint navigation. Daimler’s self-driving tractor trailers have already been testing in Nevada under a special state-granted autonomous license. But like the Google autonomous cars on the road in California, Daimler’s trucks require a human driver to be on board—the vehicles scheduled to deploy to the Sunshine State don’t.

The modified medium-duty Freightliners will be used for highway construction projects, and safety was cited as a key factor in removing from the driver from the equation.

Repairing and upgrading active roadways is always a dangerous proposition, and according to the Centers For Disease Control and Prevention, Florida is among the most perilous states for road construction workers. To address safety concerns, the rear of Royal’s truck features an Impact attenuator to insulate crews from a potential collision.

For more information on Royal’s groundbreaking program, check out the video.