See Through A Paper Airplane’s Eyes With This New Drone

Fancy hardware on a light body 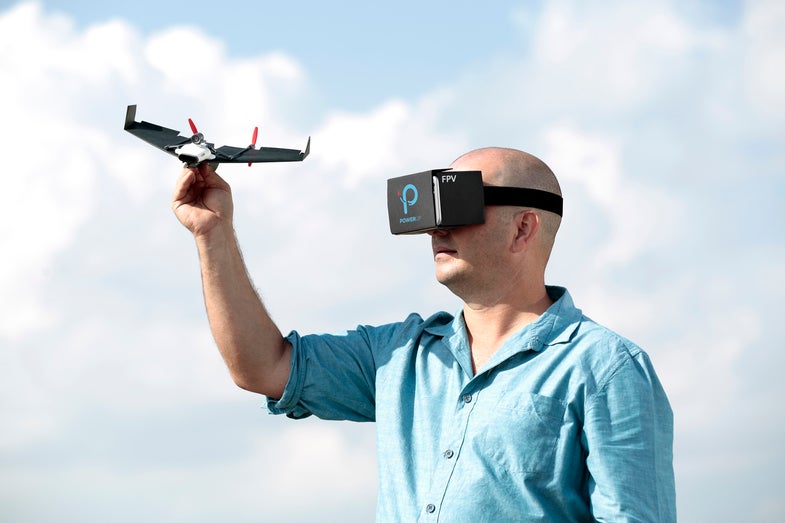 PowerUp makes remote control engines that attach to paper airplanes. This morning they announced a kit that not only puts an engine on an airplane, it adds a camera too. Dubbed the Powerup FPV, for first-person view, the drone’s camera streams video straight to a smartphone, which can then be worn in a head-mounted display like Google Cardboard. Like this:

The drone can also be piloted using controls on the smartphone. Maximum range for the drone is over 300 feet with WiFi, and the drone flies up to 20mph. (That’s about 10 seconds of flying in a straight line before it’s out of WiFi range.) The batteries on board last for about 10 minutes of continuous flight, and videos taken during flight are saved onto a MicroSD card.

PowerupFPV will launch on Kickstarter in November, with an expected price of $200 for a basic kit. The drone is a collaboration between PowerUp and French dronemaker Parrot.

Earlier this year, the Powerup 3.0 drone made headlines after the FAA granted lawyer and drone law activist Peter Sachs permission to fly a paper airplane for commercial purposes. Sachs’ petition was absurd from the premise, since the drone was extremely limited in range, used only a tiny homemade camera for his stated goal of aerial photography, and was a paper airplane. Still, the FAA said it was a drone and, with permission, could be used for business. There’s no reason to think that the PowerupFPV, complete with camera, couldn’t do the same, so long as it was flown normally–the FAA is still extremely reluctant to approve drones flying only by first person view.

Watch the teaser for the PowerupFPV below: