The "blue screen of death" is taking on a whole new meaning. 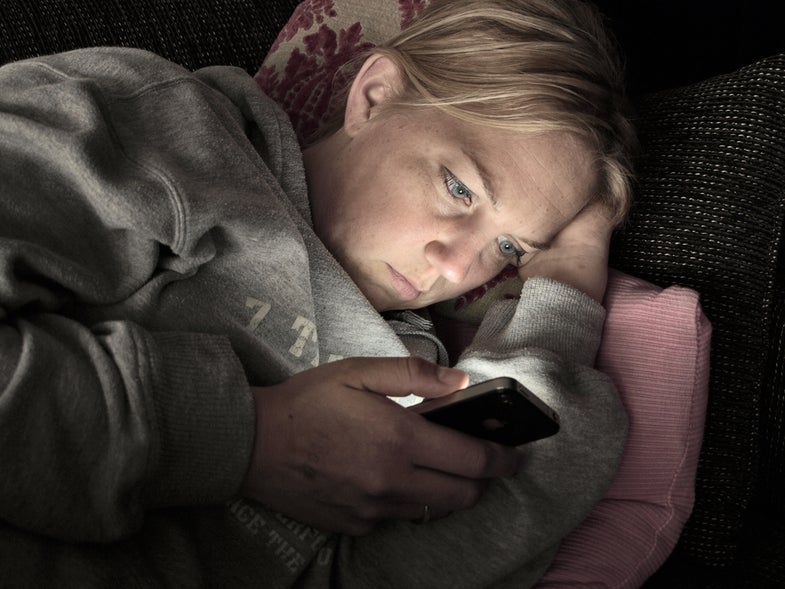 Update: This story has been changed to reflect additional interviews with ophthalmologists.

Blue light’s rap sheet is growing ever longer. Researchers have connected the high-energy visible light, which emanates from both the sun and your cell phone (and just about every other digital device in our hands and on our bedside tables), to disruptions in the body’s circadian rhythms. And physicians have drawn attention to the relationship between our favorite devices and eye problems.

Humans can see a thin spectrum of light, ranging from red to violet. Shorter wavelengths appear blue, while the longer ones appear red. What appears as white light, whether it’s from sunlight or screen time, actually includes almost every color in the spectrum. In a recent paper published in the journal Scientific Reports, researchers at the University of Toledo have begun to parse the process by which close or prolonged exposure to the 445 nanometer shortwave called “blue light” can trigger irreversible damage in cells. But experts say there’s no reason to panic.

“Photoreceptors are like the vehicle. Retinal is the gas,” says study author and chemistry professor Ajith Karunarathne. In the lab, when cells were exposed to blue light directly—in theory, mimicking what happens when we stare at our phone or computer screens—the high-intensity waves trigger a chemical reaction in retinal molecules. The blue light causes the retinal to oxidize, creating “toxic chemical species,” according to Karunarathne. The retinal, energized by this particular band of light, kills cells, which do not grow back once they are damaged. If retinal is the gas, Karunarathne says, then blue light is a dangerous spark.

Catastrophic damage to your vision is hardly guaranteed. Karunarathne says the changes in retinal seen in the study could be linked to macular degeneration, an incurable disease that blurs or even eliminates vision, but manipulating a few cells in the petri dish is very different from actually studying what happens in the human eye.

Blue light occurs naturally in sunlight, which also contains other forms of visible light and ultraviolet and infrared rays. But, Karunarathne points out, we don’t spend that much time staring at the sun. We do, however, spend a lot of time looking at our digital devices. The average American spends almost 11 hours a day in front of some type of screen, according to a 2016 Nielsen poll. Right now, reading this, you’re probably mainlining blue light.

But ophthalmologists aren’t worried. The blue light emanating from the sun drastically overpowers any rays coming from your screen. And so far, all of the research on how real human eyes react to blue light has failed to link screens to permanent damage of any kind. Blue light’s most concerning effects still seems limited to sleeplessness.

Some user experience designers have been criticizing our reliance on blue light, including Amber Case, author of the book Calm Technology. On her Medium blog she documented the way blue light has become “the color of the future,” thanks in part to films like 1982’s Blade Runner. The environmentally-motivated switch from incandescent light bulbs to high-efficiency (and high-wattage) LED bulbs further pushed us into blue light’s path. But, Case writes, “[i]f pop culture has helped lead us into a blue-lit reality that’s hurting us so much, it can help lead us toward a new design aesthetic bathed in orange.”

The military, she notes, still uses red or orange light for many of its interfaces, including those in control rooms and cockpits. “They’re low-impact colors that are great for nighttime shifts,” she writes. They also eliminate blue light-induced “visual artifacts”—the sensation of being blinded by a bright screen in the dark—that often accompany blue light and can be hazardous in some scenarios.

Apple offers a “night shift” setting on its phones, which allow users to blot out the blue and filter their screens through a sunset hue. Aftermarket products designed to control the influx of blue light into our irises are also available, including desktop screen protectors. There are even blue light-filtering sunglasses marketed specifically to gamers. But as the damage done by blue light becomes clearer—just as our vision is getting blurrier—consumers may demand bigger changes.

Going forward, Karunarathne plans to stay in data-collection mode. “This is a new trend of looking at our devices,” he says. “It will take some time to see if and how much damage these devices can cause over time. When this new generation gets older, the question is, by that time, is the damage done?” But now that he appears to have identified a potential biochemical pathway for blue light damage, he’s also looking for new interventions. “Who knows. One day we might be able to develop eye drops, that if you know you are going to be exposed to intense light, you could use some of those… to reduce damage.”